For Immediate Release
Office of the First Lady
February 9, 2006

MRS. BUSH: Well, thank you very much. This was a thrill to be here for the first Komen Italia award. Marisa, as you all heard, developed a postage stamp. She'd worked for the postal -- Italian postal service for years, and so she thought to develop a stamp, a special stamp of breast cancer awareness. 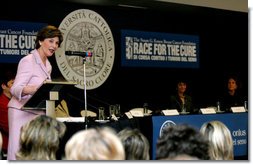 And I'm so excited to be here. I've worked for the Komen Foundation for years, long before my husband was elected to office. When I lived in Dallas, I was very good friends with Nancy Brinker, whose sister, Susan Komen, had died of breast cancer at a very young age. And Nancy had started the Komen Foundation to honor her sister.

But when Nancy started the Komen Foundation, American women didn't really talk about breast cancer. It was embarrassing, it was something you never admitted if you had breast cancer. You didn't reach out to other women or to other survivors to get support. And then really, with the foundation of the Komen, the Race for the Cure, the encouragement to get a mammogram, to see your doctor, to see if you can detect it early, because right now that's the only cure, is early detection. And since the Komen Foundation has started, now much, much more money is appropriated from the United States government to the NIH, the National Institutes of Health, for breast cancer research, and then a lot of money is raised privately to -- through the Race for the Cure and other fundraisers, to support women who have breast cancer, to reach out to women, to make the brochures and all of the things that each of our panelists were talking about today.

First, Dr. Debi Thomas, who is standing right here. (Applause.) Dr. Thomas is a figure skater. She won the bronze medal in Calgary, and she's now an orthopedic surgeon. We have another doctor with us, Dr. Eric Heiden. (Applause.) He is an Olympic gold medalist speed skater. He was the first to win all five of the speed skating gold medals at once, I guess. Is that right, Eric? And he's also an orthopedic doctor. I think it's interesting that these athletes are all now working on people's bones and joints. (Laughter.) Miss Kerri Strug, Olympic gold medal gymnast. (Applause.) And a favorite of all Americans, Dorothy Hamill. (Applause.) Dorothy won gold medalist in the '76 games in Austria, and she still skates in the United States. A lot of people love to see her. Then we'll be joined tonight by Herschel Walker, who is known in the United States for being a football player. He was a Dallas Cowboy, our favorite football team. But he was also a bobsledder. So he's going to join us tonight and be part of our -- the rest of our delegation. 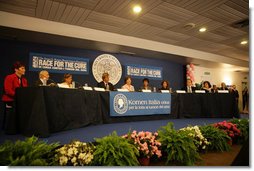 There's something that's very exciting and hopeful about Olympics. It gives us a chance to be together, a lot of countries together, to make new friends and to renew old friendships. And we're very, very proud to be the delegates of the United States to the Olympics here in Italy.

But there's also really something exciting and hopeful about all the new research about breast cancer, about the new treatments, the new early detection. There is a lot of research now in ways we can use mammography in a much more effective way to determine whether or not they're tumors so early that to remove them will be a very minor thing, rather than a mastectomy.

So I'm so excited to be here with all of you, and to be with these women who are breast cancer survivors, who are reaching out to other people who have breast cancer and are reaching out all across their country to talk to women, to encourage women to get the checkup, to have the mammogram, and if you find a tumor, to immediately seek treatment and to be knowledgeable about the treatment you're seeking, to be a full partner in your care.

So thank you all so much. Thank you for coming. Marisa, congratulations. Thank you for your great work for breast cancer research in Italy. And thanks to everyone who's been an active volunteer in the Komen Italia. Thank you all. (Applause.) 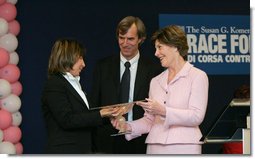