For Immediate Release
Office of the Press Secretary
January 3, 2006

THE PRESIDENT: Earlier today, I spoke to Governor Manchin of West Virginia. I told him that Americans all across our country were praying for the miners who are trapped in the mine there in West Virginia. I told him that I appreciated the great outpouring of compassion from the West Virginia citizens toward those worried family members. I also assured him that the federal government will help the folks in West Virginia any way we can to bring those miners out of that mine, hopefully in good condition. And may God bless those who are trapped below the earth, and may God bless those who are concerned about those trapped below the earth. 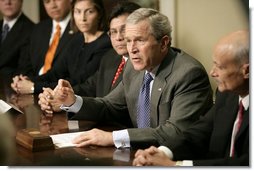 I also have just met with folks on the front line of fighting the war on terror. U.S. Attorneys from around the country have joined us. Folks from the FBI whose job it is to protect the American people are with us, as well.

We're talking about the Patriot Act and how useful the Patriot Act has been to safeguard America, and at the same time, safeguard liberties of Americans. And yet, the Patriot Act is going to expire in 30 days. And these good folks, whose task it is to do everything they can to protect the American people from a terrorist enemy that wants to hit us again, is asking the United States Congress to give them the tools necessary to do their jobs. And I'm asking the Congress to do so, as well.

This Patriot Act was passed overwhelmingly by the United States Congress in 2001. Members from both parties came together and said we will give those on the front line of protecting America the tools necessary to protect American citizens, and at the same time, guard the civil liberties of our citizens. For four years, that's what's happened. These good folks have used the Patriot Act to protect America. There's oversight on this important program. And now, when it came time to renew the act, for partisan reasons, in my mind, people have not stepped up and have agreed that it's still necessary to protect the country. The enemy has not gone away -- they're still there. And I expect Congress to understand that we're still at war, and they've got to give us the tools necessary to win this war.

And so for the next 30 days, I look forward to working with members of Congress and speaking to the American people as clearly as I can about the importance of renewing the Patriot Act.