For Immediate Release
Office of the Press Secretary
November 4, 2005

Summit of the Americas

PRESIDENT KIRCHNER: (As translated.) We have had an eventful meeting with the President of the United States. We have considered issues related to our bilateral relations between Argentina and the U.S. We have considered the situation in the region. We have listened to each other and what we have to say about domestic matters in our respective countries and how our countries are doing at the moment. I think we have been quite candid in our dialogue and we have spoken quite clearly with the President of the United States. 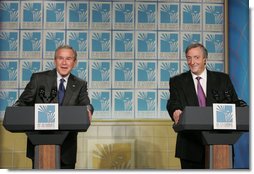 And as President of the Argentine Republic, I am pleased to have had this meeting, during which we have been able to convey to the President of the United States our thoughts on a wide variety of issues.

So in a nutshell, that's what we have dealt with, and I would now like to give the floor to the President of the U.S.

PRESIDENT BUSH: Thank you for your hospitality. Laura and I thank you and the Senator for such a warm welcome. This is my first trip to Argentina -- I hope it is not my last trip -- however, this is not our first meeting. This is our third meeting and every time we have met, I have come away impressed by your candor, your passion for the people of this beautiful land.

And as we discussed -- the first time we met until now, the economy has changed in quite dramatic fashion, thanks to wise decisions you have made. So congratulations for dealing with a difficult circumstance and making decisions that have improved the lives of your people.

Needless to say, the President was quite firm in his belief that the IMF ought to have a different attitude toward Argentina. He has been an outspoken person for reform. I listened very carefully to his point of views. I was pleased that the United States was helpful during the early part of his term at the IMF, and I suggested that his record is such now that he can take his case to the IMF with a much stronger hand. And so I appreciate the conversation there and I appreciate your candor.

I also want to thank you, Mr. President, for sending the White Helmets. These were people that came down, health specialists to help some of our folks deal with the devastation caused by Hurricanes Katrina and Rita. It was a gesture of grand friendship. And the American people are grateful. The American people are grateful for the contributions Argentines have made to our country. I mean, we've got all kinds of people in America -- Ginobili -- I don't know if you've heard of Manu Ginobili -- (laughter). He made a vital contribution to the basketball team from the state in which I live. But he's also a good ambassador for your country and people of Argentine heritage have contributed mightily to America and we're grateful for that. 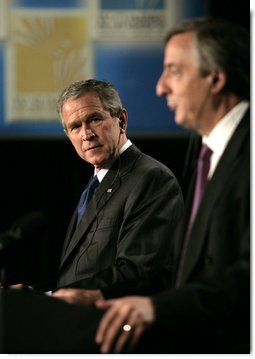 And so, Mr. President, thank you for that dialogue and thank you for that discussion. The President reminded me that U.S. involvement in the neighborhood can be constructive and positive, and I agree. And I reminded him that the best involvement that can happen is when countries make wise decisions to attract investment; that there be consistency in law, which he agrees with; that contracts be honored; that when a person makes an investment, that there is not certainty of success, but certainty that the rules won't change; that when a government fights corruption, that government sends a signal to investors, large and small, that this is a good place to take risk.

I also reminded the President we wouldn't be having this discussion if our respective economies weren't strong. And the United States economy is strong. It's healthy. We've overcome some serious challenges recently. But the investor climate in the United States, the willingness for people to invest is good. And the fact that Argentina is picking up additional direct foreign investment is positive, it shows that the country is making wise decisions.

We're going to talk about jobs later on, and that's an important subject. We discussed the need to make sure education systems were strong and vibrant, in order to make sure people can take advantage of opportunities when they arise.

I was pleased that the President was talking about a very ambitious education program, in terms of increasing expenditures, the percentage of GDP by, I think he said 2010, to be a significant increase. And that's wise. That's called leadership. And it seems like to me that at this summit, that if you believe in the values we discussed and if you understand how to make rational decisions, we ought to share those concepts with other countries. And that's why I'm glad to be down here. This is an opportunity to positively affirm our belief in democracy, in human rights and human dignity. 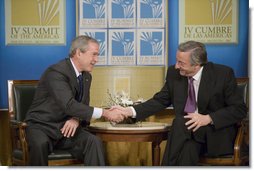 Mr. President, thank you very much. It's an honor to be here. (Applause.)

PRESIDENT KIRCHNER: (As translated.) Thank you very much for being here. Again, we had a very clear, open, candid meeting. We clearly expressed our own thoughts. And as President of Argentina, I'm leaving this meeting feeling very satisfied because it wasn't a meeting looking for nice words, but to speak the truth, and each of us did just that. Thank you very much for being here.