For Immediate Release
Office of the Press Secretary
November 4, 2005

President's Remarks to the Travel Pool at Summit of the Americas in Argentina
Sheraton Hotel
Mar del Plata, Argentina

Summit of the Americas

THE PRESIDENT: Thank you all for coming. I'll answer a couple of questions in a second. I do want to say how pleased I am to be here in Argentina, advancing an agenda that is based upon my belief and our country's belief that there are certain universal values. 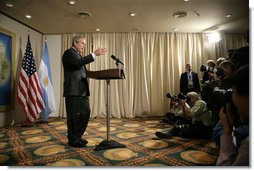 And so I'm pleased to be down here. It's a good place to spend Laura's birthday, which is today. I don't know if you knew that -- no, I know you did, okay -- but anyway, don't bring it up when you see her. (Laughter.)

But it's -- I just had a meeting earlier with the Central American countries -- young democracies, struggling to succeed, making good progress toward making sure institutions are well-rooted. I say Central American, plus Dominican Republic. And we talked about how pleased we were that we got the free trade agreement through, at least through the United States Congress. Most of the countries have ratified it. We're looking forward to implementing the trade agreement.

I had a good visit with President Kirchner. You know, Argentina is an amazing country. It's a vast land, with a lot of natural resources. And he's done a very good job of helping to -- helping this economy of theirs, and their financial picture improve. And I congratulated him on it. We talked -- well, you heard him, I won't repeat what we talked about. We talked about a lot of subjects. It was a good, honest discussion.

And, finally, I just met with our friends from the Andean nations. Good, young democracies, again struggling to fight narco-trafficking, and they were very interested in making sure that we didn't forget them, and that we continued to pursue a free trade agreement. That was the main topic of discussion. All those countries recognize the importance of having a free trade agreement with the United States, and I assured them that our negotiators are negotiating in good faith, and will continue to negotiate in good faith.

Q Hi, Mr. President. Thank you. Did Karl Rove tell you the truth about his role in the CIA leak case? And do you owe the American people an apology for your administration's assertations that Karl Rove and Scooter Libby weren't involved?

THE PRESIDENT: We're going through a very serious investigation. And I will -- have told you before that I'm not going to discuss the investigation until it's completed. And we have got a -- my obligation is to set an agenda, and I've done that. And the agenda is fighting and winning the war on terror, and keeping the economic vitality and growth alive, dealing with the energy problem, nominating people to the Supreme Court that adhere to the philosophy that I can depend on -- Judge Alito being such a person. I noticed today that they've got a date. I'm disappointed in the date, but happy they do have a firm date for his confirmation hearing. We've got to recover from the hurricanes. So I've got a lot to do, and will continue to focus on the people's business.

Q You've taken a beating in recent weeks, sir. What are you going to do for a fresh start? Are there going to be any staff changes? Would it help if the special prosecutor would wrap up his probe quickly?

THE PRESIDENT: Well, again, you're trying to get me to comment on the investigation, which I'm not going to do. And I hope you understand that. It's a serious investigation, and it's an important investigation. But it's not yet over.

I think it's important for the American people to know that I understand my job is to set clear goals and deal with the problems we face. Now, look, we've got an ongoing war on terror. And my administration is working with friends and allies to find these terrorists and bring them to justice before they strike us again. We're fighting the terrorists in Iraq. And, as you know, we've got a two-pronged strategy, an important strategy, that one -- on the one hand, has a political solution to it, on the other hand has a security solution to it. And we're working hard to achieve those objectives. We're laying what I have called the foundation for peace, because democratic nations don't war; democratic nations will be allies with each other in fighting off an ideology that is dark and grim in its vision, and is willing to use murder as its tool.

Q Okay, this is not a question about the investigation, but it's about Karl.

Q Are there discussions in the White House about whether or not Karl will remain in his job?

THE PRESIDENT: Elisabeth, the investigation on Karl, as you know, is not complete. And, therefore, I will not comment upon -- about him and/or the investigation. Again, I understand the anxiety and angst by the press corps to talk about this. On the other hand, it is a serious investigation and we take it seriously and we're cooperating to the extent that the special prosecutor wants us to cooperate.

First of all, it's to protect our country; it's to understand that we're at war with a radical ideology that wants to inflict harm on America and, at the same time, use that harm they inflict to achieve territorial ambition. I've talked a lot recently about the Zawahiri letter to Zarqawi, which is a clear statement of purpose by these terrorists. It should be viewed for what it is: an open warning to the free world that this is a very vital war and we need to win it. So I spend a lot of time talking about that -- and more than talking about it, acting on it.

Secondly, you know, our economy has shown amazing resilience in the face of natural disaster, as well as rising energy prices. But we've got to have policies in place that make it possible for the economy to continue to grow. You know, we're down here talking about trade -- it's hard to trade with somebody if they're broke. And I've told our partners that we've got good economic growth now. But what we need to do is to work with Congress to make sure that we deal with the energy crisis -- what can we do to deal with the energy crisis? Well, we can expand refinery capacity in the United States. I mean, it should be apparent to the members of Congress that when the Katrina hit there was massive disruptions of our own capacity to make gasoline, which put us in a precarious position for the consumers -- which would affect the economy, by the way.

And so we'll be talking to Congress about a further energy initiative to make sure we've got economic growth. We've obviously got work to do with Katrina and Rita, the damage from those hurricanes.

And I mentioned the Supreme Court. This is a very vital issue for the United States Senate and for the country. Sam Alito, Jr., is an incredibly intelligent, well qualified person who should be on the Court. I told the leadership I thought it would be best to have the hearings before Christmas. They didn't feel like they could get the job done. I talked to Chairman Specter, and the reason why, at least he explained to me, that he couldn't get the hearings done before Christmas is because Alito had written so many opinions and he wanted to make sure he had time to read them. And they made that decision. Fortunately, there is a firm date and we look forward to working on that date.

And, finally, an issue that is of concern to the American people is the border, is border security. I signed an appropriations bill for border security and during that signature ceremony talked about our strategy to use technology and border patrol and wise policies to do our job, which is to prevent people from illegally -- not only people, but, by the way, contraband, guns and drugs -- from coming into our country illegally. And so that's the agenda before us, and that's the agenda that I will continue to work on.

Q Mr. President, you're likely to cross paths with Venezuelan President Hugo Chavez at this summit. How should Americans think about this President, who has said many hostile things about you and your administration? Do you think of him as another Castro? And if you see him this afternoon, do you have any words for him?

And there's ways to do so. We can do so through our embassies, we can do so in forums -- not necessarily singling out a particular country or person, but talking on the positive about how important it is to have checks and balances in society, about how important it is to have these institutions so that a single person cannot become the ruler of all people. I will remind people today at this important summit that -- as we talk about poverty and minority rights, which is of concern to many countries here, that one -- such concerns are our concerns, and that if you're interested in minority rights, the best way to allow minorities to have rights is in a democratic society, where the people actually make the decisions for government.

And so it's a -- I think this is a good forum and a good opportunity to express -- for me to express our country's values. But they're not American values, I keep telling you, these are universal values that are true. That's why my meeting with President Kirchner was -- one of the reasons it was so positive is because Argentina shares the same values that America shares. They've been through some difficult experiences and making sure that those values are rooted in their societies. Of course I've reminded others, we went through difficult experiences in the past. And we had a Constitution that said everybody is free, but they weren't.

And so it's a -- so what I'll search for in the world, as I think about world leaders, is that commitment, firm commitment to values and institutions that make democracy viable.

Thank you all very much, thanks.