For Immediate Release
Office of the Press Secretary
July 7, 2005

President Offers Condolences to People of London, Will Not Yield to Terrorists
Gleneagles Hotel
Auchterarder, Scotland

PRESIDENT BUSH: I spent some time recently with the Prime Minister, Tony Blair, and had an opportunity to express our heartfelt condolences to the people of London, people who lost lives. I appreciate Prime Minister Blair's steadfast determination and his strength. He's on his way now to London here from the G8 to speak directly to the people of London. He'll carry a message of solidarity with him. 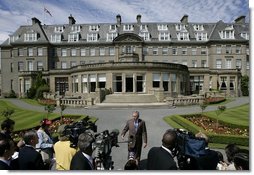 This morning I have been in contact with our Homeland Security folks. I instructed them to be in touch with local and state officials about the facts of what took place here and in London, and to be extra vigilant, as our folks start heading to work.

The contrast between what we've seen on the TV screens here, what's taken place in London and what's taking place here is incredibly vivid to me. On the one hand, we have people here who are working to alleviate poverty, to help rid the world of the pandemic of AIDS, working on ways to have a clean environment. And on the other hand, you've got people killing innocent people. And the contrast couldn't be clearer between the intentions and the hearts of those of us who care deeply about human rights and human liberty, and those who kill -- those who have got such evil in their heart that they will take the lives of innocent folks.

The war on terror goes on. I was most impressed by the resolve of all the leaders in the room. Their resolve is as strong as my resolve. And that is we will not yield to these people, will not yield to the terrorists. We will find them, we will bring them to justice, and at the same time, we will spread an ideology of hope and compassion that will overwhelm their ideology of hate.