For Immediate Release
Office of the Press Secretary
June 23, 2005

THE PRESIDENT: Thank you all for coming. Please be seated. (Laughter.) I want to thank the Democratic and Republican leaders who have come here today to support the Central American- Dominican Republic Free Trade Agreement, known as CAFTA. As you can see, there are former Cabinet members of both Republican and Democrat Presidents, former staff members of Republican and Democrat Presidents, people who have said it is time to set aside political differences and focus on this very important trade agreement for the good of our country. 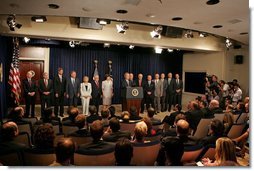 I particularly want to say thanks to Ambassador Rob Portman, who is the U.S. Trade Representative. He is the point person in the Bush administration to get this bill passed. He's working hard, he's working smart, and with your help and the help of those on the stage, I'm confident that Congress will do the right thing.

The reason we're here is because we share an interest in promoting opportunity and prosperity here at home. All of us understand that strengthening our economic ties with our democratic neighbors is a vital issue of national importance. All of us urge Congress to pass the agreement, because America has an interest in strengthening democracy and advancing prosperity in our hemisphere.

One of the surest ways to strengthen democracy and advance prosperity is by establish a trading system based on clear rules. My predecessors from both parties, former Presidents from both political parties, pursued this goal at all levels -- at the global level, at the bilateral level, and at the regional level.

Today, CAFTA presents us with an historic opportunity to advance a free and fair trading system that will bring benefits to all sides. I want to thank the members of the Diplomatic Corps from Central America who have joined us today, los embajadores. Bienvenidos. Thank you for coming.

These ambassadors understand what I just said. I said, this trade agreement benefits both sides. It's a good deal for the CAFTA countries and it's a good deal for America, as well. It's a good deal for America because CAFTA will help level the playing field for our goods and services. Under existing rules, nearly 80 percent of imports from Central America and the Dominican Republic already enter the United States duty free. But U.S. exports into the region face heavy tariffs. Let me repeat that: 80 percent of goods produced in Central America come into our country, come into the United States, duty free, yet the same isn't -- it's not the same for American products.

By passing CAFTA, the United States would open up a market of 44 million consumers for our farmers and small business people and entrepreneurs. By lowering barriers in key segments like textiles, CAFTA will put our region in a better position to compete with low-cost producers in Asia. 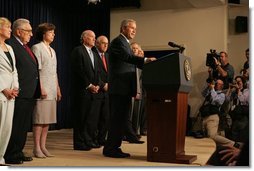 For the young democracies of Central America and the Dominican Republic, CAFTA would continue the current trade benefits. That means good jobs and higher labor standards for their workers. And because of reduced tariffs on U.S. goods, consumers in these countries would have access to better goods at lower prices. And that brings us a step closer to our goal of an Americas where the opportunities in San Jos , Costa Rica are as real as they are in San Jose, California.

People have got to understand that by promoting policy that will help generate wealth in Central America, we're promoting policy that will mean someone is less -- more likely to stay at home to find a job. If you're concerned about immigration to this country, then you must understand that CAFTA and the benefits of CAFTA will help create new opportunity in Central American countries, which will mean someone will be able to find good work at home, somebody will be able to provide for their family at home, as opposed to having to make the long trip to the United States. CAFTA is good immigration policy, as well as good trade policy.

And it's good geopolitics, as well. For the western hemisphere, CAFTA would bring the stability and security that can only come from freedom. That's what we're interested in -- we're interested in spreading freedom. Today, a part of the world that was once characterized by oppression and military dictatorship sees its future in democratic elections and free and fair trade, and we cannot take these gains for granted. These small nations are making big and brave commitments, and America must continue to support them. And CAFTA is a good way to support them. CAFTA is good for our workers, it's good for our farmers, it's good for our small business people -- but it's equally as good for the folks in Central America.

By transforming our hemisphere into a powerful trading area, CAFTA will help promote democracy, security and prosperity. The United States was built on freedom, and the more of it we have in our own backyard, the freer and safer and more prosperous America will be. The leaders from both parties here today share this vision.

These folks, who toiled in the vineyards of good international politics and worked in the White House know exactly what I'm talking about. That's why they're standing up here, and saying with a common voice to the United States Congress, let's get this bill passed. See, CAFTA is more than a trade agreement, it is a signal of our nation's commitment to democracy and prosperity for the entire Western Hemisphere. And I urge and we urge the United States Congress to pass CAFTA.