For Immediate Release
Office of the Press Secretary
March 19, 2005

THE PRESIDENT: Good morning. On this day two years ago, we launched Operation Iraqi Freedom to disarm a brutal regime, free its people, and defend the world from a grave danger. 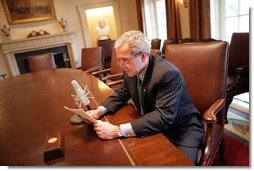 Before coalition forces arrived, Iraq was ruled by a dictatorship that murdered its own citizens, threatened its neighbors, and defied the world. We knew of Saddam Hussein's record of aggression and support for terror. We knew of his long history of pursuing, even using, weapons of mass destruction, and we know that September the 11th requires our country to think differently. We must, and we will, confront threats to America before they fully materialize.

Now, because we acted, Iraq's government is no longer a threat to the world or its own people. Today the Iraqi people are taking charge of their own destiny. In January, over eight million Iraqis defied the car bombers and assassins to vote in free elections. This week, Iraq's Transitional National Assembly convened for the first time. These elected leaders broadly represent Iraq's people and include more than 85 women. They will now draft a new constitution for a free and democratic Iraq. In October, that document will be presented to the Iraqi people in a national referendum. Another election is planned for December to choose a permanent constitutional government.

Free governments reflect the culture of the citizens they serve, and that is happening in Iraq. Today, Iraqis can take pride in building a government that answers to its people and honors their country's unique heritage. Millions of Americans saw that pride in an Iraqi woman named Safia Taleb al-Suhail who sat in the gallery during the State of the Union address. Eleven years ago, Saddam Hussein's thugs murdered her father. Today, Safia's nation is free, and Saddam Hussein sits in a prison cell. Safia expressed the gratitude of the Iraqi nation when she embraced the mom of Marine Corps Sergeant Byron Norwood who was killed in the assault on Fallujah.

To all the brave members of our Armed Forces who have taken part in this historic mission, and to your families, I express the heartfelt thanks of the American people. I know that nothing can end the pain of the families who have lost loved ones in this struggle, but they can know that their sacrifice has added to America's security and the freedom of the world.

Iraq's progress toward political freedom has opened a new phase of our work there. We are focusing our efforts on training the Iraqi security forces. As they become more self-reliant and take on greater security responsibilities, America and its coalition partners will increasingly assume a supporting role. In the end, Iraqis must be able to defend their own country, and we will help that proud, new nation secure its liberty. And then our troops will return home with the honor they have earned.

Today we're seeing hopeful signs across the broader Middle East. The victory of freedom in Iraq is strengthening a new ally in the war on terror, and inspiring democratic reformers from Beirut to Tehran. Today, women can vote in Afghanistan, Palestinians are breaking the old patterns of violence, and hundreds of thousands of Lebanese are rising up to demand their sovereignty and democratic rights. These are landmark events in the history of freedom. Only the fire of liberty can purge the ideologies of murder by offering hope to those who yearn to live free.

The experience of recent years has taught us an important lesson: The survival of liberty in our land increasingly depends on the success of liberty in other lands. Because of our actions, freedom is taking root in Iraq, and the American people are more secure.