For Immediate Release
Office of the Press Secretary
January 11, 2005

THE PRESIDENT: Good morning. I'm pleased to announce my nomination of Judge Michael Chertoff to be the Secretary of Homeland Security.

Mike is a talented and experienced public servant. In his stellar career, he has been a judge on the United States Court of Appeals for the Third Circuit; he's been an Assistant Attorney General of the United States; he's been the U.S. Attorney for New Jersey, a federal prosecutor in New York City, and a law clerk to Supreme Court Justice William Brennan. 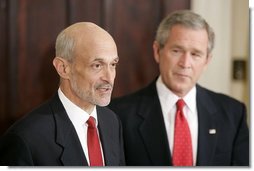 He's been confirmed by the Senate three times. In all of his roles, Mike has shown a deep commitment to the cause of justice, and an unwavering determination to protect the American people. Mike has also been a key leader in the war on terror. On September the 11th, 2001, he was managing the Criminal Division of the Department of Justice, an 800-person operation devoted to enforcing our nation's criminal laws. In the days after September the 11th, Mike helped trace the terrorist attacks to the al Qaeda network. He understood immediately that the strategy on the war on terror is to prevent attacks before they occur. His energy and intellect put him at the center of many vital Homeland Security improvements, especially increased information sharing within the FBI and with state and local officials.

He's faced countless challenging decisions and has helped to protect his fellow Americans while protecting their civil liberties. I'm grateful that the Judge has agreed to bring his exceptional judgment and integrity to an urgent new responsibility. I'm confident that he will be a strong, effective leader for the Department of Homeland Security.

Two years ago, we created this new department to ensure a comprehensive, unified effort to protect the American people against new dangers. Since that time, the employees of the department have carried out the largest reorganization of the government in a half a century. Under the direction of Secretary Tom Ridge, the Department of Homeland Security has improved airline security, enhanced the protection of our borders and ports of entry, and taken vital steps to safeguard the nation's critical infrastructure. Tom Ridge has the gratitude of our entire nation. I thank him for his leadership. I appreciate his hard work.

The Department of Homeland Security will also continue working to reduce the nation's vulnerabilities to weapons of mass destruction and cyberterrorism. We are engaged in a daily mission to prepare effective responses to any future attack and to closely coordinate homeland security efforts with state and local officials. Our nation is still at war. We're focused. We're taking decisive actions on the home front that are critical to winning this war.

When Mike is confirmed by the Senate, the Department of Homeland Security will be led by a practical organizer, a skilled manager, and a brilliant thinker. As head of the Criminal Division, and as a U.S. Attorney in New Jersey, Mike built an impressive record of cutting through red tape and moving organizations into action. He's worked cooperatively with the federal and state and local law enforcement officials. He will always be a friend to America's first responders.

Mike is a strong and decent man. As an attorney, he has prosecuted organized crime and corporate fraud. He stood against racial profiling. He's worked with the NAACP Legal Defense Fund to represent poor inmates on death row. He's earned the respect of lawyers of many backgrounds, and of politicians on both sides of the aisle. This is the third time I've asked Mike to serve our nation, and I'm grateful he's agreed. I'm also grateful to Meryl, Mike's wife, and his family. I urge the Senate to promptly confirm this outstanding nominee as America's second Secretary of Homeland Security.

MR. CHERTOFF: Mr. President, I'm deeply honored that you are nominating me to be Secretary of the Department of Homeland Security. If confirmed, it will be my privilege to serve with the thousands of men and women who stand watch across the country and overseas, protecting our security and promoting our freedom.

On September 11th, 2001, I joined members of dozens of federal agencies in responding to the deadliest single attack on American civilians ever. In the weeks and months that followed, we all worked under your direction to prevent further despicable acts of terror. If confirmed as Secretary, I will be proud to stand again with the men and women who form our front line against terror. Their job is law enforcement, and much more. They secure our ports and our airways, our borders and our buildings, our computers and our public utilities. They respond to natural and manmade disasters in our hours of greatest need.

Secretary Tom Ridge has preformed magnificently in launching this new department. He leaves some very big shoes to fill. I join the whole country in expressing gratitude to him for his service.

To Meryl and my children, I say, thank you for your love, for your support, and for your sacrifices, which have allowed me to shoulder the responsibilities of public service. Mr. President, I thank you for your leadership in protecting all of our families and our way of life. I appreciate the trust you have placed in me. If confirmed, I pledge to devote all my energy to promoting our homeland security, and as important, to preserving our fundamental liberties.