For Immediate Release
Office of the Press Secretary
December 2, 2004

THE PRESIDENT: Thank you all. Good morning.

I am pleased to announce my nomination of Governor Mike Johanns to be the Secretary of Agriculture.

THE PRESIDENT: Governor Johanns is an experienced public service -- servant from America's agricultural heartland. As a son of Iowa dairy farmers, he grew up close to the land. He will bring to this position a lifetime of involvement in agriculture, and a long record of a faithful friend to America's farmers and ranchers. He will lead an important agency with the executive skill he has learned as mayor and as a two-term governor of Nebraska. 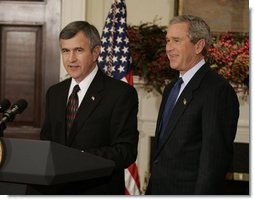 I've known Mike for a number of years, going back to my own service as a governor. I know firsthand his deep commitment to a strong farm economy. He's been a leader on drought relief in Nebraska and throughout the Midwest. He's a strong proponent of alternative energy sources, such as ethanol and biodiesel. He's traveled the world to promote American farm exports.

Governor Johanns is a man of action and of complete integrity. He knows how to bring people together to achieve results. He has been a superb leader for the people of Nebraska, and I'm grateful that he's agreed to take on this important new responsibility in my Cabinet.

THE PRESIDENT: I'm grateful, as well, to Secretary Agriculture Ann Veneman, for leading the Department of Agriculture these past four years. Secretary Veneman has earned the trust of farmers and ranchers across America, and the whole nation has benefited from her service. Ann played a central role in passing the 2002 farm bill, which has been critical to the success of our farmers.

She's kept our nation's commitment to fighting hunger and is overseeing major improvements in school nutrition programs. Ann led our efforts to prevent the spread of Mad Cow Disease, and worked hard to secure the food supply against the threat of bioterrorism. And she has helped set in motion an incredibly important effort to maintain the health of our forests and protect the lives and property from devastating wildfires.

I chose Ann Veneman for her great expertise, her sound judgment and her bipartisan spirit, and she has displayed those qualities every day of her tenure. Ann has also carried out her duties while facing serious illness, and for that she's earned my increased admiration and the respect of her fellow citizens. I'm proud to know her, and I thank her for serving our country.

The policies we've pursued over the last four years have revived America's economies, and have helped our farmers and ranchers earn greater income and to sell record amounts of food and fiber abroad. In a new term, we'll continue policies that are pro-growth, pro-jobs, and pro-farmer. We'll keep working to open new markets to American grain and beef and cotton and corn. We'll enforce trade laws to make sure other countries play by the rules. We will expand conservation programs to help farmers, and to protect our soil and water and wildlife. 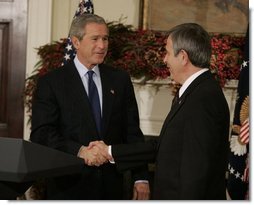 We will stand behind family farmers by keeping taxes low and ensuring the federal death tax is repealed permanently. And when confirmed by the Senate, Mike Johanns will lead a department of 113,000 dedicated public servants, and be a champion of the farmers and ranchers who feed America and the world beyond.

I am grateful to Mike and to Stephanie, his wife, for their willingness to come to Washington. I look forward to welcoming Mike to my Cabinet.

Congratulations. I appreciate you.

GOVERNOR JOHANNS: Thank you very much.

THE PRESIDENT: You bet, Mike.

GOVERNOR JOHANNS: Thank you, Mr. President. It is an honor and it is a privilege for me to be nominated to serve in your Cabinet. I have enormous respect for you and for the work that you are doing for our great country.

I would also like to recognize the presence of my wife, Stephanie. We've shared our lives together and today is even more special for me because Steph is here. I would also like to acknowledge our children, Justin and Michaela, and our daughter-in-law, Kim. They are all working in Nebraska, so they could not be with us today. We also have two grandchildren that we treasure, Burkett and Noelle, who are also back in our state.

If you visit my website for the governor's office, you'll find my bio there. Paraphrasing, it starts, "Mike Johanns grew up on a diary farm near Osage, Iowa." As you can tell, I'm very, very proud of my ag background. I do feel that those years on that diary farm did much to define who I am as a person. In my campaign for governor, as a matter of fact, we ran a radio ad and it said, "After growing up on a dairy farm, the son of John and Adeline Johanns, everything in life has seemed easy after that." (Laughter.)

As governor of Nebraska, I have devoted a substantial amount of my time promoting rural economic development and ag issues, not only in our state, but across our country and overseas. For the past four years, I want you to know that it has truly been a privilege to work on these issues with Secretary Ann Veneman. She's been a great friend to the ag community and I look forward to building on her good work.

Mr. President, you have said that agriculture is the cornerstone of our economy, and that the strength of agriculture contributes to the strength of our great nation. As governor of a state that is the fourth largest exporter of ag products, I've been able to witness firsthand your leadership and I have been able to see your commitment to strengthening the nation's ag community. Your administration and the fine men and women of the Department of Agriculture have strengthened America's food and ag system for the benefit of farmers and ranchers, rural communities, the environment and the American consumer.

If confirmed by the Senate, I look forward to advancing your rural agenda for the 21st century. There are challenges ahead, but I know that my colleagues and I from the Department of Agriculture will answer the challenge.

I will close my comments where I started -- Mr. President, thank you so much for this honor and for this opportunity.