For Immediate Release
Office of the Press Secretary
June 17, 2004

President Discusses Economy, Iraq in Cabinet Meeting
Remarks by the President After Meeting with His Cabinet
The Cabinet Room

THE PRESIDENT: I've just met with my Cabinet. We discussed primarily the economy. And I was pleased with the report I got. The U.S. economy is strong and it's getting stronger. People are going back to work. There's a sense of optimism around this table, because these people have been out in the field and talking to people, talking to small business owners and entrepreneurs. I'm pleased with the progress we're making. 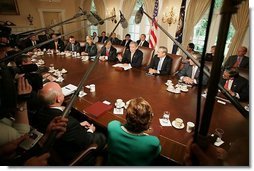 The other thing we talked about was our firm resolve to spread freedom, and therefore peace, around the world. We fully understand terrorists will try to shake our will, to try to shake our confidence, to try to get us to withdraw from commitments we have made in places like Afghanistan and Iraq. And they won't succeed. Iraq will be free, and a free Iraq is in our nation's interest. A free Iraq will make the world more peaceful. A free Iraq will be an ally of those nations who honor human rights and human dignity and the aspirations of men and women everywhere. A free Iraq will make America more secure.

And we're making progress toward that goal. We've been there -- it's been 14 months since the fall of Baghdad, and the work has been hard and difficult. Yet our military on the ground has done an excellent job of making sure the conditions are such that an Iraqi government can emerge and lead their nation to the better days.

I'll be glad to answer a couple of questions. Deb, why don't you lead it off?

Q Mr. President, why does the administration continue to insist that Saddam had a relationship with al Qaeda, when even you have denied any connection between Saddam and September 11th. And now the September 11th Commission says that there was no collaborative relationship at all. 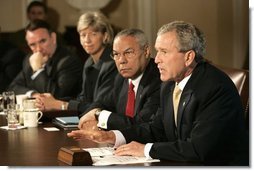 No, he was a threat, and the world is better off and America is more secure without Saddam Hussein in power.

Q Mr. President, given your administration's assertions that it works closely with the International Red Cross, are you disappointed that Secretary Rumsfeld instructed military officials in Iraq to hold a member of Ansar al-Islam without telling Red Cross officials?