For Immediate Release
Office of the Press Secretary
March 31, 2004

THE PRESIDENT: Thank you all for coming. Laura and I are honored and thrilled that you're here. We have a fair amount of lunches and dinners here, and I've got a confession to make -- this is my favorite one. (Laughter.) It's kind of like having your baseball card collection spread out in real life. (Laughter.)

Some of you were here the last time we invited the Hall of Famers here. It was one of the first lunches we had. It's when I discovered that one of the best parts about living in the White House is that when you invite somebody for lunch, they generally come. (Laughter.) 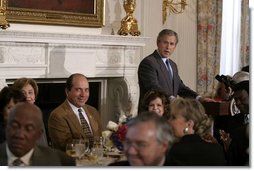 All the Hall of Famers, we're glad you're here. And thanks for bringing family members, too. You're welcome to the people's house.

I appreciate the ESPN Baseball Tonight folks who are here -- Joe, Tim, and Peter. That's where I get my news. (Laughter.) They do a great job of making -- bringing baseball into our homes.

My Chief of Staff is here, by the way -- Andy Card. He is a long-suffering Red Sox fan. I'm glad you're here. George Will is here, as well. (Applause.) Long-suffering Cubs fan. But welcome, everybody.

I can't wait for the baseball season to open. You know, some people, like when they go up to relax, will have the symphony on. I have a baseball game on. I like to do my -- prepare for the next day, and my background noise is a baseball game. I'm really looking forward to it. And it's a -- a great way for us to kick off the season here in Washington is have some of the greatest players ever to come and help us kick off baseball.

It's such a wonderful sport. There aren't any time limits, which means you can go and enjoy yourself. It's a great place to go and relax. It's a wonderful place to visit with somebody you love. It's a -- it's an important part of our -- part of our history. And we love to herald it here. We love to herald it so much that one of my favorite things to do is to host T-ball on the South Lawn, so that future Hall of Famers can come and say to one of their classmates, I love baseball, and I got to play at the White House. (Laughter.)

One of the traditions, of course, is for the President to throw out the opening pitch for baseball. I'm going to do so for the Cards. I was talking to Phil Niekro coming in. My arm is a little sore. (Laughter.) I was getting suggestions on how to throw a knuckler. (Laughter.)

I also know that a former pitcher for the American Legion team in Casper, Wyoming, will also be throwing out an opening day pitch in Cincinnati. That would be your Vice President. He suggested that they not pull out the radar gun. (Laughter.)

You know, I love the game of baseball. I grew up loving baseball. It's a sport that's passed down from dad to son, in my case -- actually, my mother used to keep score for the Yale Bulldogs. I happened to be one-and-a-half years old when she was keeping score for the Yale Bulldogs. So both my parents passed on the love of baseball. I played Little League baseball in Midland, Texas. It's where I peaked. (Laughter.) I actually played for the Midland Cubs -- except, unlike Ernie Banks, I was not known as "Mr. Cub." (Laughter.) I was known as an all-right catcher.

I think one of the wonderful things about being with Hall of Famers is you set such high standards for other players, as you've set the stage of excellence. I know there's a lot of players who are getting ready to start the opening season that long to be sitting here in the White House, like you are. You've set such a high mark of how to be excellent in a grueling sport, in a sport that requires not only incredible skill, but a lot of patience. It's a marathon, not a sprint. And you've set the standard, and we're proud to have the standard-setter here in the greatest house on the face of the Earth, the people's house, the White House.

Thanks for coming. May God bless you and your families, and may God continue to bless our great country. Thank you. (Applause.)