For Immediate Release
Office of the Press Secretary
March 26, 2004 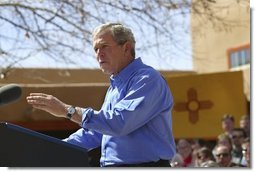 Background on The President's Homeownership Initiative

President Bush is making a difference in the lives of American home buyers. The President's aggressive housing agenda includes providing down payment assistance through the American Dream Downpayment Initiative; increasing the supply of affordable homes through the Single-Family Affordable Housing Tax Credit; making a difference in the lives of low-income homebuyers with the Zero-Downpayment Initiative; and increasing home-buying education and counseling. President Bush also issued America's Homeownership Challenge to the real estate and mortgage finance industries to encourage them to join the effort to close the gap that exists between the homeownership rates of minorities and non-minorities.