For Immediate Release
Office of the Press Secretary
May 7, 2003

PRESIDENT BUSH: Welcome. It's also my honor to welcome an important friend of America, President Jose Maria Aznar. I welcome you back to the Casa Blanca. It's good to see you again.

Jose Maria is a man of principle and a man of courage. Under his leadership, Spain has been a strong partner in the war against terror, and has stood with the coalition to liberate the people of Iraq. He believes in freedom, freedom for all. 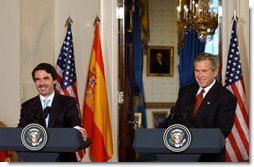 Together, Spain and America will continue to meet the responsibilities of free nations for the peace and security of the world.

We last met in March at the Atlantic Summit in the Azores. The eight weeks since have been a momentous chapter in the history of freedom. We liberated the people of Iraq from a brutal dictatorship. We brought greater security to people of all nations.

I want to thank the President for Spain's diplomatic support before the conflict, and for the use of Spanish airspace and bases as the war grew closer. I also offer my condolences to the family and friends of the two members of the Spanish media who lost their lives while covering the hostilities.

Both Spain and the United States are committed to a stable, democratic and peaceful future for the people of Iraq. Spain has shown that commitment by sending medical and engineering units to help the Iraqi people. And I thank you for that help.

Today I removed the sanctions imposed by the United States against Iraq's old government. First, based on the authority recently given to me by Congress, I am suspending the Iraq Sanctions Act, which restricts the export of certain equipment necessary for Iraq's reconstruction.

Secondly, I am directing Treasury Secretary Snow to relax administrative sanctions on American companies and citizens conducting business in Iraq that contributes to humanitarian relief and reconstruction.

Soon, at the U.N. Security Council, the United States, Great Britain and Spain will introduce a new resolution to lift the sanctions imposed by the United Nations. The regime that the sanctions were directed against no longer rules Iraq. And no country in good conscience can support using sanctions to hold back the hopes of the Iraqi people.

Across the globe, Spain and America will continue as strong allies in the war against terror. Today, the United States took steps to cut off financing for the Batasuna organization, because of its ties to the ETA. We believe that the people of Spain, like everywhere, have a right to live free from terror.

We'll also work for a better world beyond the war on terror. We are committed to expanding trade, which builds prosperity on both sides of the Atlantic. We'll work together to address global poverty and the terrible diseases, such as HIV-AIDS.

Spain and the United States will stand on the side of people everywhere who are striving for greater freedom, tolerance, and opportunity. We are determined to help build peace between the Israelis and the Palestinians. Last week's confirmation of Abu Mazen and his cabinet permitted the release of the road map for peace, developed with Russia, the European Union, and the United Nations. Spain and the United States are determined to take advantage of this moment of opportunity for peace. I'm grateful for the wise counsel and for the friendship of Jose Maria Aznar.

PRESIDENT AZNAR: Good afternoon, everyone. I would, firstly, like to thank President George Bush, and thank him because of his kind invitation. And I want to thank the President personally because, upon his initiative, the U.S. government has taken an extremely important decision in the anti-terrorist struggle by legalizing Batasuna that has supported -- considering it -- sorry -- a terrorist organization as part of the terrorist organization that has made so many victims in Spain.

I want to recall here in the White House precisely that in July 2001 -- that is to say, before 9/11 -- President Bush committed himself very firmly in Madrid to solve and help to fight terrorism. So we're speaking of deep convictions that unite us.

So I want you all to know that President Bush has scrupulously met his commitments, and today, in a very fundamental support in the struggle against terrorism. And I, as President of the government of Spain, as a Spaniard, and as a friend, would like to thank him most especially.

The second thing I wanted to say is that the relationship between Spain and the United States is extremely solid, strong, it's firm, and we want it to be that way not only now, but also in the future. And I think that it is based on a shared vision and on shared values, on many things. Given one clear example, the most serious risk, perhaps, to us all -- terrorism. But this relationship is based on firm belief in shared values, and in principles that we defend and that we proclaim and that we assume.

And it's also based on something that is very important, in that commitments are met. And that's something these days worth remembering. And that's the value of giving your word. When you give your word and you keep it, then that gives rise to trust, and that, in turn, friendship. And that, I believe, is what serious countries and serious governments must do.

With regard to Iraq, that we've spoken about, I very much appreciate all the information that the President shared with me. Well, we've done, very simply, very normally, what we had to do. But today, we confront the future with optimism from a founded hope for the Iraqi people in freedom. Having one freedom for the Iraqis is the best hope we can sow for Iraq's future. And we want a democratic Iraq in which the Iraqis may decide their own future, they can be -- have their own future in their own hands, and naturally, that they can live in freedom.

That is something that Spain is committed to, to Iraq's reconstruction. And we will, naturally, co-sponsor with our friends and partners, the United States, Great Britain, the new resolution that the Security Council may take on sanctions.

Yesterday, I told Secretary General Kofi Annan that sanctions had to be lifted. And I believe it should be done as quickly as possible, because they've lost their reason to exist. And with that resolution we will also be meeting one of the commitments of the Azores, and that is defining the central role of the United Nations in the process.

One last consideration regarding the Middle East -- Israelis, Palestinians -- the starting out of the road map is the expression of a firm political commitment of all of us, and the expression of President Bush's firm political commitment. That opens up possibilities, because after the situation in Iraq now many possibilities opened up. But it also opens up responsibilities. Everyone has to meet their responsibilities. And we very highly value the steps taken by the Palestinian Authority. We wish Abu Mazen success. And we will actively cooperate so as to sow the relationship between Israelis and Palestinians with co-existence, peace and hope.

Q Thank you, Mr. President. How are you doing in getting a resolution put together to win the support of some of the critics on the Security Council, namely Russia and France? And is the United States prepared to ignore the sanctions if the June 3rd deadline comes and it's necessary?

And to Mr. President Aznar, what will you be able to do to help win the speedy vote you talked about? And do you find that public opinion at home is making it harder for you to make such a case?

PRESIDENT BUSH: He managed to violate a rule. He asked two questions, instead of one question. But that's okay. He's been around a long time. Yes, listen, we have -- we discussed the resolution today. We believe there is a mood to work together to achieve a resolution that will expedite the reconstruction of Iraq. The read from at least our diplomats at the United Nations is that the kind of atmosphere that existed prior to the war has changed, and that people now want to work together for the good of the Iraqi people. I think Jose Maria shares that sentiment.

PRESIDENT AZNAR: Absolutely. I hope it's true. For our part, the position I've maintained is a clear one, and everyone needs to contribute to it within the Security Council. And it's all about the Iraqi people, so I hope we're successful.

Q Well, President Bush, you have expressed your condolences because of the death of the two Spanish journalists in Iraq. My question would be, do you think this was a mistake, firing against the Palestine Hotel, under which fire Jose Couso died? And, if so, would you apologize, do you think it's necessary to apologize before the Spanish government and the family of these journalists?

PRESIDENT BUSH: I think war is a dangerous place. And I think that nobody would kill a journalist intentionally.

PRESIDENT AZNAR: Well, the U.S. government has already said that this was a mistake, and we believe this. I am truly, fully convinced that no one would intentionally fire against innocent victims and, in this case, the journalists who died. And that's all, that's it. The President has often expressed the pain that this produces and his condolences because of this. And I think that's clear enough.

Q Mr. President, do you have any reaction to Senator Byrd's criticism of your aircraft carrier landing?

PRESIDENT BUSH: The fact that it was on the fourth hook?

Q I guess that's it. (Laughter.) I think the words were "flamboyant showmanship."

PRESIDENT BUSH: Yes. No, listen, it was an honor for me to go on the USS Abraham Lincoln. I appreciate the chance to thank our troops. It was an unbelievably positive experience. And not only was I able to thank our troops, I was able to speak to the country and talk about not only their courage, but the courage of a lot of other men and women who wear our country's uniform. I'm glad I did it. It was also a really good landing.

Q The criticism is that -- the criticism was made of Chile and Mexico, that they would not support the resolution in the U.N. Security Council, the war against Iraq. What is your opinion of this?

PRESIDENT AZNAR: For my part, I have to say that in addition to being our friends, they're family.