For Immediate Release
Office of the Press Secretary
February 27, 2003

Mr. President, welcome back to the Oval Office.

The President has just brought me and members of my administration up to date on the progress being made in Afghanistan. I guess the best way to summarize the discussion is that I'm welcoming a courageous leader, who's got a clear vision about the future of a country he loves, back to the Oval Office. 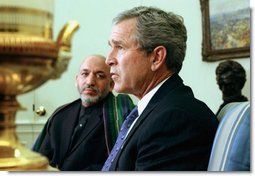 I was deeply impressed by some of the statistics that he talked about. Over 2 million refugees have returned back to Afghanistan since he was last here in the Oval Office. As the President pointed out, those are people who are expressing their opinion about the future of Afghanistan by making a decision to return home.

This is tremendous progress, and I want the American people to know that we're proud of the progress which is being made. I want to continue to thank the American people for their support of the -- of Afghanistan and our desire for the -- human life to improve there.

And, Mr. President, we appreciate your leadership, your determination. And we continue to look forward to working with you to bring not only peace to that part of the world, but a hopeful future for the citizens. So welcome back to the Oval Office.

PRESIDENT KARZAI: Well, thank you very much, Mr. President. It's an honor for me to be here with you in the White House. The United States and yourself have helped tremendously in the past year to rebuild Afghanistan, to help us in all aspects of life, including the 3 million children that now go to school have been receiving help from the United States. You have helped us with the roads, with the building of the National Army of Afghanistan.

I'm here to thank you and the American people. And I'm also here to ask you to do more for us in making the life of the Afghan people better, more stable, more peaceful. I'm also here to tell you that the war against terrorism is going on. We have defeated them, but some elements are still there. And we should go on strong and tough to get them all and free the world from that menace.

Q Mr. President, following up on your speech last night, if the United States had expanded its mission beyond the liberation of Kuwait and removed Saddam Hussein from power in the 1990s, would the Middle East be more peaceful now?

I noticed today there is some talk about the illegal rockets in Iraq. He -- this is part of his -- the discussion about these rockets is part of his campaign of deception. See, he'll say, I'm not going to destroy the rockets, and then he'll have a change of mind this weekend and destroy the rockets, and say, I've disarmed. The rockets are just the tip of the iceberg. The only question at hand is total, complete disarmament, which he is refusing to do. 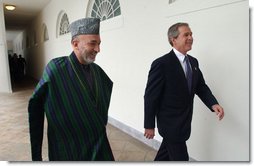 Q If I could just follow up, though, on your rationale from yesterday. If we could have peace in the Middle East by removing Saddam now, couldn't we have had it if we had removed him 10 years ago? Or is that a --

PRESIDENT BUSH: The mission -- just remember what the mission was. When you commit troops to war, you must have a clear mission. Should we be forced to commit our troops because of his failure to disarm, the mission will be complete disarmament, which will mean regime change. That was not the mission in 1991.

Q You talked last night about the Middle East road map. What's holding that up? When can we see that?

Q Mr. President, consumer confidence numbers hit their lowest levels in, I think, nine years yesterday. And many of those surveyed say that they're more concerned about the economy than they are about Iraq. Money managers on Wall Street say that even when the uncertainty over what is happening in Iraq is resolved, there remain many obstacles of a purely business nature that leave them less than confident looking forward. Are you frustrated by the sense that perhaps perception could become reality here, that the lack of confidence seems to be becoming more entrenched?

PRESIDENT BUSH: I've got confidence in the future of our economy. There's strong signals that this economy will improve. But I understand we need to have a stimulus package to make sure that the forecasts and the predictions become true. A lot of the experts are projecting growth at 3.3 percent. Inherent in their projections is that Congress pass a stimulus package, fiscal stimulus package. I proposed the one that I think will work.

But I'm very optimistic about the future of this country

-- the economic future, and I'm optimistic about our chances to achieve peace.