For Immediate Release
Office of the Press Secretary
January 14, 2003

Let me first start by saying how much I'm honored that my friend, the President of Poland, is back in Washington. We're thrilled you're here. My only regret is that you didn't bring your beautiful wife with you, the First Lady of Poland. 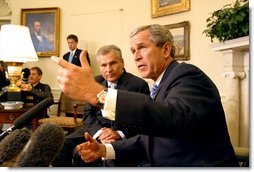 But we're here to have a substantive talk on a lot of issues, issues ranging from the war on terror to the recent decision by the Polish government on the purchase of U.S.-made aircraft, to how best to implement that decision, to let the Polish people benefit so the decision is not only good for the defense ministry of Poland, but it's good for the people of Poland.

And the President cares deeply about the people of Poland and we'll have a good discussion along those lines. I've got no better friend in Europe today than Poland. One of the reasons why is because this man has made a commitment to work together, as equal partners, in the war on terror, on the desire to lift the -- find freedom for people who live in misery.

And so Mr. President, we're so glad you're back, and welcome back to the Oval Office.

PRESIDENT BUSH: I appreciate you.

PRESIDENT KWASNIEWSKI: Mr. President, dear friends, so after very short time -- because I paid official visit to the United States July last year -- I am again in Oval Office, in White House in Washington, and I think this is a good sign that our cooperation, our relations are very active and very friendly.

Now we'll have consultations, we will discuss all the problems concerning war against terror, at the national situation. And I think today is the best time to discuss, because before action, before last decisions it's necessary to exchange opinions, of experiences, of some ideas. And that is very substantial element of my trip to Washington now.

Second, what President Bush mentioned, Poland decided to have your fighter F-16. It was very transparent, very open and very well prepared tender, and I think we have a chance not only to have good place for Polish army, not only to have a good contribution to our NATO membership -- but we have a chance to open new chapter in the economic relations between Poland and United States, and this is the next reason of my visit and of our discussion.

America has unique chance to accelerate economic activities, investment activities in Poland. We are open, we are prepared, we have good practice, we have specialists. And what is my satisfaction, America wants to do it. That's what is good news, good message for all of us here in the United States and Poland, as well.

Q Thank you, sir. Jack Kelly has very publicly promised North Korea energy aid in exchange for Pyongyang giving up its nuclear program. Isn't that rewarding North Korea for bad behavior -- something you promised never to do?

PRESIDENT BUSH: First of all, there's a big concern here in our country about North Korea and I'm absolutely convinced this issue will be solved in a peaceful way. I want to remind the American people that prior to North Korea making the decision it made, that I had instructed our Secretary of State to approach North Korea about a bold initiative, an initiative which would talk about energy and food, because we care deeply about the suffering of the North Korean people.

And then the North Koreans made a decision. And the decision they made was to ignore international norm, ignore treaties that they had -- agreements that they had reached, and start building potential nuclear weapons, enriching uranium. And now they have expelled -- are in the process of kicking out IEAE [sic] people.

I view this as an opportunity to bind together nations in the neighborhood and around the world to make it clear to the North Koreans that we expect this issue to be resolved peacefully, and we expect them to disarm. We expect them not to develop nuclear weapons. And if they so choose to do so -- their choice -- then I will reconsider whether or not we will start the bold initiative that I talked to Secretary Powell about.

People say, well, are you willing to talk to North Korea? Of course we are. But what this nation won't do is be blackmailed. And what this nation will do is use this as an opportunity to bring the Chinese and the Russians and South Koreans and the Japanese to the table to solve this problem peacefully.

PRESIDENT KWASNIEWSKI: I agree. I think in the Korean case absolutely not to compare with Iraq's case. And we have a chance to discuss about North Korea with very serious partners which are thinking the same way. I mean, Japan, Russia, China, South Korea. We have a chance to propose something very positive to North Korea, maybe not for regime -- because when I read some information about this regime, it's not so easy to propose something -- something special. But absolutely. I am sure that we have enough possibilities to propose positive solution for this case, but with all international partners.

PRESIDENT BUSH: Would you care to call on somebody from Poland, Polish press?

PRESIDENT BUSH: Let me start. You bet the war on terror can be won. And not only can it be won, we're going to win it. And the way you win it is you work together. You share intelligence, you complement each other's efforts. If we find somebody thinking about doing something to our friends in Poland, we'll share the information with this government, and vice versa. We will work together to cut off money. And we will hunt the killers down one at a time. And that's exactly what we are doing and exactly what we are going to do.

PRESIDENT BUSH: Is it Steve or Scott?

Q The weapons inspectors say they need until March, maybe six months, maybe a year. Is this what you had in mind when you went to the U.N. back in September?

Time is running out on Saddam Hussein. He must disarm. I'm sick and tired of games and deception. And that's my view of timetables.