For Immediate Release
Office of the Press Secretary
January 15, 2009

THE PRESIDENT: Thank you all. I got five days left; be seated. (Laughter.)

Madam Secretary, thank you very much for your kind introduction, and thank you for these beautiful reminders of how fantastic it's been to work with you.

By the way, these are going to be at Southern Methodist University -- (laughter) -- proudly displayed at the presidential center I will build to remind our country of the timeless values of freedom and liberty. And I am honored to take them back to Texas. I'm honored to take my wife back to Texas, too. (Laughter.) 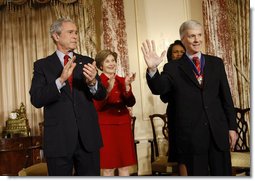 The award you gave Laura, Condi, is well deserved in my unobjective opinion. She has been awesome First Lady. And I'm proud to have been here in Washington. And you've been an awesome friend and a great Secretary of State.

You know, people -- I tell people all the time, they ask me about Condi, and I say, she's like my sister. We've been through a lot together. (Laughter.) And one of the things about her is that she has never lost her great optimism. She's plenty tough when she needed to be tough; she's plenty charming when she needs to be charming. But during the darkest of days, she always had a sense of optimism and constantly reminded me of what is possible and what will happen if we don't lose confidence in fundamental truths. History will say that Condi Rice was one of the great Secretaries of State our country has ever had. (Applause.)

And I thank my friend John Negroponte. I call him Ponte -- you better call him -- (laughter) -- Mr. Secretary. He has done a lot of hard work on behalf of the country, and he has really done it well -- a variety of jobs that have required skill and dedication and courage, and each job he's handled with a lot of class, he really has.

I want to thank the ambassadors who have joined us. Thanks for coming. Appreciate your service to your countries. And I want to thank all those who work here -- veterans and rookies alike. (Laughter.) This is a fabulous department and a vital part of making sure this country remains secure in the long run. And it's been a joy to work with you.

Tonight I'm going to give a farewell address to the American people. It's going to be a short one. (Laughter.) But it's got a lot of meaning to it, as far as I'm concerned. I'm going to urge our nation to continue to engage the world with confidence -- confidence in the transformative power of freedom and liberty.

These are the ideals that gave birth to our own nation -- these universal ideals gave birth to America. And over the past eight years, together we have worked to advance these ideals. And every member of this department can be proud of the results.

In the Middle East, we stood with dissidents and young democracies. Sometimes that was not easy to do. But we stood strong with those young democracies. We outlined a vision of two democratic states, Israel and Palestine, living side by side in peace and security. 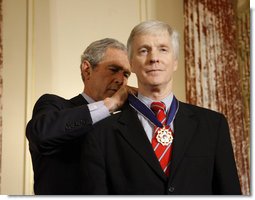 In Asia, we deepened our alliances with old friends, Japan and South Korea, and we strengthened ties with China. I'm not so sure if this is historically accurate, but we may be the only administration that has had really good ties with Japan, South Korea and China all at the same time.

And we opened a new historic and strategic partnership with India.

In Europe, we expanded NATO to include new democracies from the Baltics to the Balkans. We work in a multilateral fashion to deal with issues like Iran and North Korea.

In Africa, we helped resolve old conflicts and form new partnerships to confront hunger and disease and poverty. I'm often asked, you know, how come you, from Texas, care about Africa? And I remind people -- I'm reminded of one of my first conversations with Condi. And she said, if I'm going to work with you, I want you to make sure you focus on Africa. She gets a lot of credit for the focus on Africa.

I also acted on this timeless belief, to whom much is given, much is required. We have been given a lot in our country. And it's not only in our strategic interests that we deal with hunger and disease, it is in our moral interest that we do so, as well. In the Western Hemisphere, we expanded trade and helped our fellow democracies deliver prosperity and social justice to their people. And around the world, we built a coalition of more than 90 nations to fight terror and advance the cause of freedom in the great ideological struggle of our time.

In short, we've made our alliances stronger, we've made our nation safer, and we have made the world freer. The record is a testament to all those who have served, including our outstanding Foreign Service Officers. This is a profession that requires commitment and sacrifice. When you volunteered for the Foreign Service, you agreed to put the needs of your country before your own and your family. You agreed to spend years away from home, and you knew that your service might just put you in harm's way.

Today we send our thoughts and prayers to all the men and women representing America in distant lands, and we pledge that we will never forget the brave souls who did not come home.

As President, I have entrusted the Foreign Service with our nation's most critical diplomatic missions. I have relied on your expertise, your advice, and your good judgment. I will always be grateful for your valor and your professionalism. 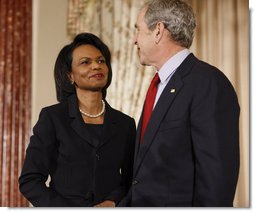 Members of the Foreign Service bring this valor and professionalism to their work every single day. And there is one man who embodies these qualities above all: Ambassador Ryan Crocker. Over the years, Ryan has earned many honors, including the Presidential Meritorious Service Award and the rank of Career Ambassador. Today I have the privilege of honoring Ambassador Crocker with the highest civil award I can bestow -- the Presidential Medal of Freedom. (Applause.) It has not been bestowed yet. (Laughter.)

The son of an Air Force officer, Ryan Crocker has never been your typical diplomat. For social engagements, he likes to tell guests, "no socks required." (Laughter.) For language training, he once spent time herding sheep with a desert tribe in Jordan. For sport, he has jogged through war zones, and run marathons on four continents. And for assignments, his preference has always been anywhere but Washington. (Laughter.)

During his nearly four decades in the Foreign Service, Ryan Crocker has become known as America's Lawrence of Arabia. His career has taken him to every corner of the Middle East. His understanding of the region is unmatched. His exploits are legendary. He has served as ambassador to five countries. He has repeatedly taken on the most challenging assignments.

The man has never run from danger. As a young officer during the late 1970s, Ryan catalogued Saddam Hussein's murderous rise to power. In 1983, he survived the terrorist attack on the American embassy in Lebanon. In 1998, as the Ambassador to Syria, he witnessed an angry mob plunder his residence.

After any one of these brushes with danger, most people would have lost their appetite for adventure -- not Ryan Crocker. In the years since September the 11th, 2001, I have asked Ryan to hold numerous posts on the front lines of the war on terror, and he has stepped forward enthusiastically every time.

When the American embassy in Kabul reopened in the beginning of 2002, Ryan Crocker was our first envoy. When we liberated Iraq and removed the thug Saddam Hussein from power in 2003, I sent Ryan to help lead the reconstruction efforts. When the American embassy in Pakistan needed new leadership, Ryan Crocker was put in charge. In 2007, I asked Ryan to return for a final mission to Iraq as America's ambassador.

Two years later, Iraq is becoming a rising democracy, an ally in the war on terror, an inspiring model of freedom for people across the Middle East. When the story of this transformation is written, historians will note the extraordinary partnership between two exceptional men: General David Petraeus and Ambassador Ryan Crocker. As the General carried out a surge of military forces to improve security, the Ambassador led a civilian surge to improve everyday life. In December, after months of intense negotiations, the world saw the culmination of Ambassador Crocker's masterful diplomacy -- two historic agreements for long-term cooperation between the United States and Iraq. 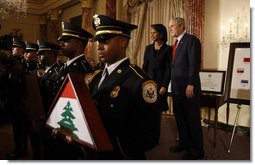 This is not the first time that Ambassador Crocker has executed a brilliant diplomatic maneuver in Baghdad. During a rotation at the American embassy nearly 30 years ago, he persuaded a young Foreign Service Officer named Christine Barnes to be his wife. (Laughter.) They have traveled the world together, and as Ryan prepares to retire from the Foreign Service, we wish the two of them many years of happiness. (Applause.)

General Petraeus recently said this about his retiring colleague: "It was a great honor for me to be his military wingman." And today it is my great honor to present the Presidential Medal of Freedom to one of the finest Foreign Service Officers in American history -- Ryan Clark Crocker. And now the military aide will read the citation. (Applause.)

MILITARY AIDE: Ryan C. Crocker. For nearly four decades, Ryan Crocker has advanced our nation's interests and ideals around the world. Embodying the highest principles of the United States Foreign Service, he has cultivated and enhanced our relations with pivotal nations. Following the attacks of September 11th, 2001, he worked to build a worldwide coalition to combat terrorism and help millions of oppressed people travel the path to liberty and democracy.

The United States honors Ryan C. Crocker for his courage, his integrity, and his unwavering commitment to strengthening our nation and building a freer and more peaceful world.

(The medal is presented.) (Applause.)