For Immediate Release
Office of the Press Secretary
January 13, 2009

PRESIDENT BUSH: Bienvenido a mi amigo. Mr. President, welcome. It has been a true pleasure to work with President Calderón. He's a man of conviction, he is a man of principle, and he is a man who's willing to take on tough challenges. I appreciate every meeting I've had with him.

I want to talk about two subjects quickly. One, Americans are concerned about the battle that's taking place in Mexico, and I want our fellow citizens to understand that this man understands the responsibilities of government to provide security; that he will not allow his country, or parts of his country, to be taken over by narco-traffickers; and that the United States of America wants to share and help deal with the issue on both sides of the border. The less drugs we use, the less pressure there will be in Mexico. We have got responsibilities to help prevent guns from going from the United States into Mexico. 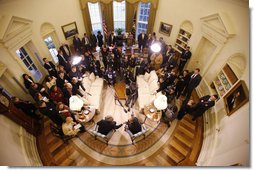 And so, Mr. President, you and I have laid the foundation for a constructive and mutual engagement on this issue.

And so, Mr. President, it has been a pleasure to work with you. Thank you for your friendship.

(Speaking in English.) Thank you, President Bush. Good luck in the future.

INTERPRETER: Good afternoon, friends. I wanted to say that I came here to Washington, D.C., to wish President Bush the very best. I want to wish him and his family all the best in this new phase. And I want to thank him especially for the friendship that he has shown me over the last two years in facing our common challenges together.

PRESIDENT CALDERÓN: And his support.

This is not an isolated problem for any country. This is a common problem that affects us both. And in order to do so, we have worked together and we have made this resolution.

We are committed to fighting criminals and to overcoming them once and for all. And the rule of law is the one thing that I want to stress we are going to promote, no matter what, in our country. 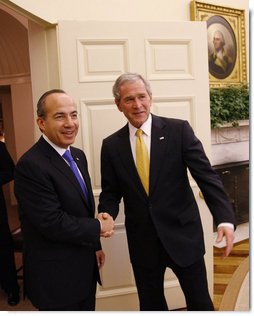 I agree with what the President has said with regard to the North America Free Trade Agreement. It has proved to be very useful, both for the United States and for Mexico. In that regard, millions of jobs were created here in the United States. Mexico is the second-largest purchaser of U.S. goods. We buy, in fact, twice as many U.S. products as the People's Republic of China. Two million jobs based on exports were created in Mexico --

PRESIDENT CALDERÓN: No, in the United States.

INTERPRETER: In the United States -- excuse me -- as a result of NAFTA. And yesterday, I was discussing with President-Elect Obama the fact that we are willing to continue working on future additions of a way to continue to build on the achievements that NAFTA has created -- benefits, issues of concern to both of our citizens. I understand that there are issues of concern to Mexicans, as well as to U.S. citizens, on the issue of the environment and on labor.

I want to wish the very best to President Bush, to his family, as well as to the United States. The U.S. will continue to solve its problems with success, I have no doubt about that. And we in Mexico can only wish the very best for this country, a great country, and for its citizens in overcoming the economic crisis it is now facing, overcoming other problems, as well as drug consumption, because any problems arising in the United States in some way will also affect Mexican citizens, as well.

And so we can only wish you the very best in every area. Thank you.