For Immediate Release
Office of the Press Secretary
January 13, 2009

THE PRESIDENT: I want to thank an extraordinary group of American citizens who have served our country as members of my Cabinet. Everybody around this table here could have taken the easy road and stayed home and worried about their own comforts, but instead they answered the call to service. And the country is lucky to have folks like this step up and serve. 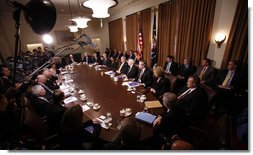 I have thanked them here at my last Cabinet meeting not only for their service, but for helping President-Elect Obama transition. And we wish the President-elect and his team all the very best. It is our genuine wish that they do well.

We also reviewed our record, and this administration has had a good, solid record. I'm very proud of it. I tell people I leave town with a great sense of accomplishment and my head held high. We reformed education and test scores for minority students are up. We reformed Medicare -- seniors have now got prescription drug coverage. We lowered taxes for everybody who pays taxes. We transformed our military to make it be able to deal more effectively with the threats of the 21st century. And the Secretary transformed the State Department so it can deal with the threats of the 21st century, as well.

We changed how we deliver aid around the world through the Millennium Challenge Account. I put good judges on the bench. Drug use for teenagers is down in America by about 25 percent. The air is cleaner, the water is purer. The armies of compassion are more invigorated than ever before. Free trade agreements have been signed.

We dealt with an economic meltdown with strong action so that our successor has a better chance of dealing with the economic fallout from the credit crisis.

Most of all, we protected this country from harm. And we did so by providing tools for our professionals, as well as asking our military to do hard work, which they have done time and time again. Concurrent with that, we promoted the freedom agenda -- 50 million people are now free in Afghanistan and Iraq because of action taken by the United States and our coalition.

But when I talk about the freedom agenda I talk about more than just freedom from tyranny. I talk about freedom from hunger, and we've had a substantial aid program to help people who are hungry; and freedom from disease. I'm very proud of the efforts out of the State Department to -- like PEPFAR, which is the AIDS initiative on the continent of Africa, as well as our Malaria Initiative.

All in all, this administration has relied upon the great compassion of the American people, the sacrifice of those who wear the uniform. And so we leave town honored to have served. I'm proud of the job that we've done. Thank you very much.