For Immediate Release
Office of the Press Secretary
January 10, 2009

THE PRESIDENT: Thank you very much. Secretary Gates, thank you for your introduction. I know I speak on behalf of President 41 when I say it has been a privilege for both of us to serve with this fine and distinguished man.

I want to thank you all for coming. Laura and I are thrilled to be here to help commission an awesome ship and to honor an awesome man: President George H.W. Bush. (Applause.) 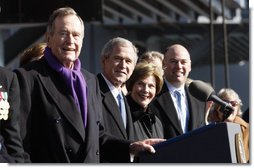 To prepare for this day, I went back through some of my father's letters. I thought it was especially interesting to read one that he wrote in the late 1940s. He sent it to a friend -- and here's what he said, he said, "You should see Georgie now. Whenever I come home he greets me and talks a blue streak, sentences disjointed of course." (Laughter.) "He tries to say everything, and the results are often hilarious." (Laughter.) Some things do not change. (Laughter.)

The aircraft carrier which we commission today may be the Navy's newest ship -- but she has already had an interesting past. Her catapult testing took place during an unseasonable cold snap. Her christening was thrown into chaos by a fierce nor'easter. And during construction, the shipyard was closed down because of Hurricane Isabel. So in keeping with this ship's short history, I brought along an equally strong force of nature: my mother. (Laughter.)

Mr. Vice President and Lynne, thank you for joining us. Vice President Cheney has been a fabulous Vice President of the United States. (Applause.) Governor Kaine, thank you for your welcoming remarks. Secretary of State Condoleezza Rice, I appreciate you joining us. Other members of the administration and their families; the Chairman of the Joint Chiefs of Staff, Admiral Mike Mullen; CNO Gary Roughead; Captain O'Flaherty; other member of the United States Armed Forces and their families; shipyard workers and managers; members of our family who have joined us, and all the friends of George H.W. Bush: We are glad you are here.

The story of the USS George H.W. Bush begins in the early days of World War Two, when our dad enlisted in the United States Navy. Like many servicemen deployed overseas, he was sustained by a girl he loved back home. From her dorm room, she knitted socks for him. In remote Pacific atolls, he collected seashells for her. And when he returned home from war, the first thing he did was to make her his bride. And for 64 years ago this week, the love of my father's life has been Barbara Bush. (Applause.)

Over the years, our parents have built a family bound forever by closeness, warmth, and unconditional love. Jeb, Neil, Marvin, and Doro and I will always feel blessed to have had the best father anyone could ever ask for. We will always be inspired by the faith, humor, patriotism, and compassion he taught us through his own example. And for as long we live, we will carry with us dad's other lessons: that integrity and honor are worth more than any title or treasure, and that the truest strength can come from the gentlest soul. 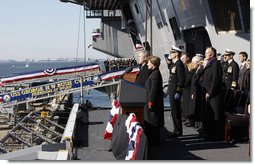 George H.W. Bush has the deep love of his family, the admiration of his friends, and the thanks of a grateful nation. So today we are faced with the -- (applause.) So what do you give a guy who has been blessed and has just about everything he has ever needed? Well, an aircraft carrier. (Laughter.) The ship that bears our dad's name is more than 95,000 tons of aluminum and steel. She will carry nearly 6,000 of the finest sailors and Marines in the world. (Applause.) She represents the craftsmanship of many skilled builders, and thousands of hours of preparation. And so I congratulate all of you on this tremendous achievement.

This ship is a fitting tribute to a generation of men with whom my dad was privileged to serve. She's also a tribute to a new generation of American soldiers and sailors and Coast Guardsmen and women, airmen and Marines who have stepped forward to defend the United States America. Again our troops are facing down a brutal enemy. Again they are making America and the world safer. And again they will come home in victory. (Applause.)

People often ask what I treasure most about being the President -- nothing comes close to the honor of being your Commander-in-Chief. Every day, I'm amazed by the skill and courage of our men and women in uniform. And as we send the USS George H.W. Bush into service, I know you will do credit to the sailors who served before you -- and the good man for whom this ship is named. I ask that God protect this ship, and let her know only victory and peace. And I ask God's continued blessings on our wonderful nation. Thank you. (Applause.)

THE PRESIDENT: I hereby place the United States ship, George H.W. Bush, in commission. May God bless and guide this warship and all who shall sail in her. (Applause.)

FORMER PRESIDENT BUSH: Thank you very much. (Applause.) Thank you. Mr. President and Mr. Vice President, all the distinguished guests here; I want to single out Captain O'Flaherty and what a great man he is and how lucky we are to be in command of this ship.

If you'll forgive an old Navy man a little reminiscing, being here in this ceremony takes me back 65 years to another commissioning -- this one on the shipyards of Philadelphia, of the USS San Jacinto, the light carrier upon which my crew mates -- very few of whom are with us today -- and I were preparing to serve in World War Two. Speaking of not many of them being with us, I feel like Phyllis Diller, when she said, "All my friends are dying in alphabetical order" -- but I'm glad to be here. (Laughter.) 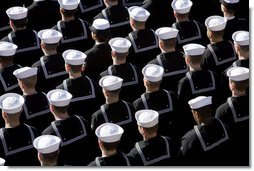 A few memories of that distant day, December 15, 1943, stand out. First and foremost, it was during that trip to Philadelphia that I gave my fiancée -- a certain Barbara Pierce of Rye, New York -- an engagement ring. She had come down for the ceremony with my mother, and we had only just that week made our engagement public. Bar and I thought we had done a pretty good job of keeping our romance a secret -- but by that point in our courtship it is possible the Germans and the Japanese were the only people who didn't know we were planning to get married. (Laughter.)

The other memory that stands out from this first commissioning was the fact that I was -- thought that the San Jac was by far the biggest ship -- or anything else I'd ever seen. At 660 feet long and 120 feet high it cut an impressive figure, to be sure. But next to this ship, it really cannot compare. Almost twice as long, with a 4.5 acre landing field, a tower that exceeds up to 20 stories above the waterline, and a feature that a few of my granddaughters, in particular, would really like -- that's right, onboard this carrier there are a mind-boggling 1,400 telephones. (Laughter.)

For all of the special enhancements this carrier has received, however, for all of the state of the art technology, and the safety, the environmental features, the most important element will finally be added today in the form of the men and women who will serve aboard this floating Naval air station. To those who are sitting out there where I was 65 years ago preparing to serve aboard your new ship, I wish I was sitting right out there with you, ready to start the adventures of my naval aviation career all over.

I don't know if I could have handled the jets we fly today, but as you prepare to man this ship, I do know that you take with you the hopes and the dreams of every American who cherishes freedom and peace. And you take with you the undying respect and admiration of the entire Bush family.

In just a few moments I will take part in helping to set the first watch for CVN 77. And from that moment on, until this ship is officially retired many, many years from now, you will form an unbroken line of patriots protecting this special piece of American territory. As someone who has stood that watch and remembers the quiet solitude of that experience, I know you will find comfort and inspiration particularly in the night sky, for it is basking in the splendor of the stars that you will truly understand the majesty of creation and bear witness to the certain hand of God.

Make no mistake, the work aboard this ship will be routinely difficult and sometimes dangerous. But the freedom we seek and the peace we desire can only be found in the countless sacrifices you will make in everyday tasks you will perform. So thank you for your service. Good luck to each and every one of you. And may God bless the men and women who sail in CVN 77. (Applause.) 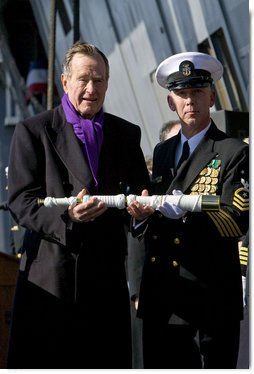 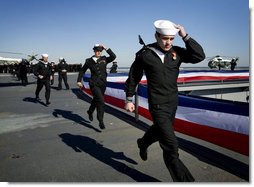 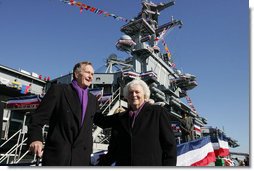 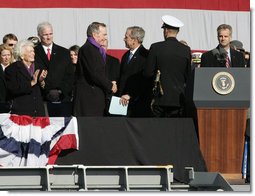