For Immediate Release
Office of the Press Secretary
January 7, 2009

THE PRESIDENT: Thank you all. Mr. President. (Laughter.) Yes? No -- (laughter.) Thank you all for coming. I'm told there are seven speakers. So there's now about to be six. I thank you -- I welcome you to the White House. I hope you take advantage of the reception that we have after these seven short speeches. And I want to thank you for your compassion.

The strength of America is not our military, it's not our wallet; it is -- lies in the hearts and souls of our citizens, those who hear the universal call to love a neighbor just like they'd like to be loved themselves. 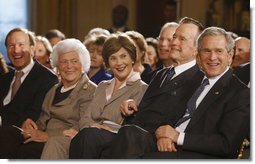 And now it is my honor to introduce my brother -- Neil M. Bush. (Applause.)

FORMER PRESIDENT BUSH: It's a well-kept secret -- I didn't know this was about me. (Laughter.) But thank you all very much, and thank you, Harris, for those very kind and extraordinarily generous remarks.

I particularly want to thank the President and the First Lady for opening up the White House, and for keeping the spirit of volunteerism alive and well. Service to others, he believes and I believe, we all believe -- and I have to be the most biased person in this room, but I think this President and this First Lady have done an extraordinary job in taking this concept forward.

I want to thank Ray Chambers and Marian Heard -- where's Marian? Right here. Quiet -- she is not -- normally not that way. (Laughter.) And Ray. The amount they've done for this cause is just hard to quantify. It's just wonderful.

As much as 2009 also marks 20 years since we started a nationwide movement to mobilize citizens, and all backgrounds and all walks, to help their fellow man, let me thank those who were present at the creation -- from our fearless leader here at the White House in Gregg Petersmeyer, who was singled out a minute ago -- and our founding board members, of course, Ray and Marian Heard. And I see so many others here who have done so very much for this cause.

Once we were out of the gate, a number of talented people, including Bob -- is Bob here? Not here. (Applause.) There's the man, there he is -- joined the fight and helped keep the fire burning and our cause moving forward and touching more lives. And now, most importantly, we have two capable leaders stepping forward to head the Points of Light hands-on network, and they are, as you've heard -- a distinguished Georgian, Marian -- Michelle Nunn and Neil Bush, my son -- our son. And they have our full faith and confidence, and we are very fortunate they are doing the job and just pushing, putting in all the time in volunteer fashion.

Of course, Neil and Michelle and the entire Points of Light team can't do the important work by themselves. They need the support and inspiration of the corporate and civic leaders in this room. And there are countless more around the country, I might add. This is nationwide. And I think they're getting it. But let me thank each and every one of you for adding your leadership and your vision to this nationwide, vital cause.

In the final analysis, the same realities, the same truths that led us to set this shared movement in motion 20 years ago remain unchanged. And we still believe in the innate propensity of the American people to reach out beyond themselves to help others. That's what this is really all about. We still believe there's nothing wrong with America that can't be fixed by what's right with America. And we're here to affirm once more that from now on in America, there can be no definition of a successful life that does not include service to others.

I know the idea behind this event was to honor what our administration started, but speaking for my team, the honor was all ours. And that's the way it is when you engage in community service. The satisfaction of knowing that you've made a difference is indeed the greatest reward.

Of course, there's still so much to do. So let me simply close by encouraging our new leadership, all on the team, to get out there and keep fighting away. I may not be able to suit up again and get out on the field with you like I would want to, but the Lord knows I'll be there with you in spirit every step of the way.

And so now I have another honor, and that is to introduce a Point of Light, himself -- a musical Point of Light -- Larry Gatlin. Where is he? (Applause.)