For Immediate Release
Office of the Press Secretary
January 6, 2009

In Focus: The Bush Record 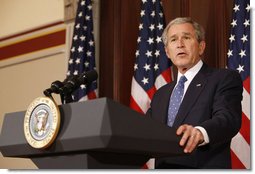 Governor, I am proud you're here. Thank you for coming. And Josie is with you. Representatives from -- by the way, Northern Mariana Islands -- Governor. Just in case you don't know him. (Laughter.) We know him -- and we like him. And all the representatives from America Samoa, really appreciate you all coming. Apologize for the weather, but I don't apologize for the policy, because we're fixing to do some fabulous policy.

It's interesting that we're gathered a few steps from the office once occupied by a young Assistant Secretary of the Navy named Theodore Roosevelt. Not long after he left the position, he was back on these grounds as the 26th President of the United States. And exactly a hundred years ago, he embarked on his final weeks as the President -- something I can relate to. (Laughter.)

President Roosevelt left office with many achievements, and the most enduring of all was his commitment to conservation. As he once said: "Of all the questions which can come before the nation, short of the actual preservation of its existence in a great war, there is none which compares in importance with leaving this land even a better land for our descendants than it is for us."

That spirit has guided the conservation movement for a century; it's guided my administration. Since 2001, we have put common-sense policies in place, and I can say upon departure, our air is cleaner, our water is purer, and our lands are better protected.

To build on this progress, I'm pleased to make several announcements today. Under the Antiquities Act that Theodore Roosevelt signed in 1906, the President can set aside places of historic or scientific significance to be protected as national monuments. With the proclamations I will sign in a few moments, I am using that authority to designate three beautiful and biologically diverse areas of the Pacific Ocean as new marine national monuments.

The first is we will establish the Marianas Trench Marine National Monument. At the heart of this protected area will be much of the Marianas Trench -- the site of the deepest point on Earth -- and the surrounding arc of undersea volcanoes and thermal vents. This unique geological region is more than five times longer than the Grand Canyon. It is deeper than Mount Everest is tall. It supports life in some of the harshest conditions imaginable. A fascinating array of species survive amid hydrogen-emitting volcanoes, hydrothermal vents that produce highly acidic and boiling water, and the only known location of liquid sulfur this side of Jupiter.

Many scientists -- and I want to thank the scientists who have joined us today -- believe extreme conditions like these could have been the first incubators of life on Earth. As further research is conducted in these depths, we will learn more about life at the bottom of the sea -- and about the history of our planet.

The other major features of the new monument are the majestic coral reefs off the coast of the upper three islands in the Commonwealth of the Northern Mariana Islands. These islands, some 5,600 miles from California, are home to a striking diversity of marine life -- from large predators like sharks and rays, to more than 300 species of stony corals. By studying these pristine waters, scientists can advance our understanding of tropical marine ecosystems not only there, but around the world.

The second new monument will be the Pacific Remote Islands Marine National Monument. The monument will span seven areas to the far south and west of Hawaii. One is Wake Island -- the site of a pivotal battle in World War II, and a key habitat for nesting seabirds and migratory shorebirds. The monument will also include unique trees and grasses and birds adapted to life at the Equator; the rare sea turtles and whales and Hawaiian monk seals that visit Johnston Atoll; and some of the most pristine and spectacular coral reefs in the world. These isolated specks of land and abundant marine ecosystems are almost completely undisturbed by mankind. And as part of the Pacific Remote Islands National Monument, they will be ideal laboratories for scientific research.

The third new monument will be the Rose Atoll Marine National Monument. Rose is a diamond-shaped island to the east of American Samoa -- our nation's southernmost territory. It includes rare species of nesting petrels, shearwaters, and terns -- which account for its native name, "Island of Seabirds." The waters surrounding the atoll are the home of many rare species, including giant clams and reef sharks -- as well as an unusual abundance of rose-colored corals. This area has long been renowned as a place of natural beauty. And now that it's protected by law, it will also be a place of learning for generations to come.

The benefits of today's decision reach far beyond nature. The monuments will preserve sites of cultural and spiritual significance to native peoples. They will ensure full freedom of navigation, and include measures to uphold training missions and other military operations. And they will open the door to new economic benefits in the Territories. After all, if travelers now, or students, or scientists, book a ticket to Saipan or Pago Pago, they will know they're headed for a place with friendly people and a vibrant culture, and some of our country's most treasured natural resources.

This morning I'm also pleased -- today I'm also pleased to share some news about two other national treasures. One is the Northwestern Hawaiian Islands Marine National Monument, which I created in 2006. This stunning island chain is the largest single conservation area in American history, and the largest fully protected marine area in the world. And the other is Mount Vernon -- the home of America's first President and an agricultural pioneer -- that would be George Washington. I'm pleased to announce the United States will soon submit a request that these two landmarks become UNESCO World Heritage sites -- America's first such submission in 15 years.

The new steps I've announced today are the capstone of an eight-year commitment to strong environmental protection and conservation. Look, I know that sounds contrary to the conventional wisdom of many in the news media. But let me just share a few facts about our record -- and you can be the judge for yourself:

Since 2001, air pollution has dropped by 12 percent. The strictest air quality standards in American history are now in place, as are strong regulations on power plant and diesel engine emissions. More than 3.6 million acres of wetlands have been protected, restored, or improved. Millions of acres of vital natural habitat have been conserved on farms. More than 27 million acres of federal forest land have been protected from catastrophic wildfires. The maintenance backlog in our national parks has been reduced. More than 11,000 abandoned industrial brownfields are on their way back to productive use. We've had a new focus on cleaning debris from our oceans. Popular recreational fish like the striped bass and red drum are gaining new protection. And new marine protected areas are helping improve the health of our fisheries off the southeast coast.

At the same time, we've taken aggressive steps to make America's energy supply cleaner and more secure -- and confronted the challenge of global climate change. I signed two major energy bills. We raised fuel efficiency standards for automobiles for the first time in more than a decade. We mandated major increases in the use of renewable fuels and the efficiency of lighting and appliances.

We dedicated more than $18 billion to developing clean and efficient technologies like biofuels, advanced batteries and hydrogen fuel cells, solar and wind power, and clean, safe nuclear power. We're providing more than $40 billion in loan guarantees to put these technologies to use.

We forged an international agreement under the Montreal Protocol mandating major cuts in refrigerants that are some of the most potent greenhouse gases. We built international consensus on an approach that will replace the Kyoto Protocol with a global climate agreement that calls for meaningful commitments to reduce greenhouse gases from all major economies, including India and China.

With all these steps, we have charted the way toward a more promising era in environmental stewardship. We have pioneered a new model of cooperative conservation in which government and private citizens and environmental advocates work together to achieve common goals. And while there's a lot more work to be done, we have done our part to leave behind a cleaner and healthier and better world for those who follow us on this Earth.

And now I'd like those who have been assigned the task of standing up here to join me as I sign the national monuments. (Applause.)