For Immediate Release
Office of Science and Technology Policy
December 19, 2008


WASHINGTON – The White House announced today the recipients of the 2007 Presidential Early Career Awards for Scientists and Engineers, the Nation’s highest honor for professionals at the outset of their independent scientific research careers.  Sixty-seven researchers were honored today in a ceremony presided over by Dr. John H. Marburger III, Science Advisor to the President and Director of the White House Office of Science and Technology Policy.

The Presidential Early Career Awards for Scientists and Engineers, established in 1996, honors the most promising researchers in the Nation within their fields.  Nine federal departments and agencies annually nominate scientists and engineers who are at the start of their independent careers and whose work shows exceptional promise for leadership at the frontiers of scientific knowledge.  Participating agencies award these talented scientists and engineers with up to five years of funding to further their research in support of critical government missions. 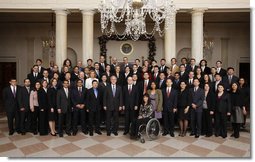 The recipients of the 2007 Presidential Early Career Awards for Scientists and Engineers, along with their nominating federal department or agency are:

Gregory A. Fabiano, University of Buffalo

Department of Health and Human Services:

Thomas A. Blanpied, University of Maryland, School of Medicine

Raymond Habas, University of Medicine and Dentistry of New Jersey

Stergios I. Roumeliotis, University of Minnesota