For Immediate Release
Office of the Press Secretary
December 19, 2008

I want to especially recognize Vice President Cheney; the Chief Justice, who's joined us; the members of the President's Cabinet who are here; and all the current and former members of the White House staff who've joined us today. We've loved working with all of you, and I want to thank you especially for your service to our nation. 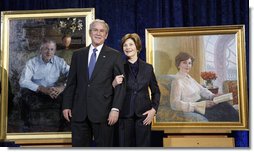 Thanks to everyone whose contributions to the Smithsonian helped make these portraits possible. And congratulations to Sasha Titovets for your good work.

My good friend, Adair Margo, who's Chairman of the President's Committee on the Arts and Humanities, introduced me to Sasha's paintings last year. Sasha was born in Russia, and he brings an Old World style to his work in the United States. The nostalgia of his portraits and landscapes is striking. And I was especially happy to invite an artist from my mother's childhood home of El Paso, Texas, to paint my portrait.

Sasha said that he postponed telling his mother when his work was chosen for this portrait. He thought the news might be "too big" for her. (Laughter.) And history shows us that these assignments can sometime turn out poorly. Years ago, Peter Hurd was commissioned to paint Lyndon B. Johnson's portrait for the official White House collection. President Johnson took one look at the final portrait and declared it the "ugliest thing he'd ever seen." (Laughter.) Across Washington, the joke spread at Hurd's expense that artists should be seen, but not Hurd, at the White House. Peter Hurd's portrait of President Johnson now hangs here in the National Portrait Gallery.

Sasha Titovets had no reason to anticipate similar criticism. As you can see, his talent shines. Sasha, I hope you finally told your mother about your latest accomplishment.

I'd like to acknowledge Marty Sullivan, the director of the National Portrait Gallery, and Marc Pachter, the Gallery's former director. Visiting the Smithsonian Museums, and particularly the Smithsonian Art Museums, has been one of my favorite pastimes here in Washington. So it's a special honor to have my portrait displayed in these halls. And I want to give special thanks to all the museum directors that I see -- all the Smithsonian Museum directors that I see sitting here on the front row. Thank you all very, very much for your wonderful service to the United States.

And thanks for working to unveil these portraits early -- while President Bush is still in office. Upstairs, I saw that Dolley Madison's portrait is praised for "offering a glimpse of the aging Mrs. Madison." (Laughter.) That's exactly the type of compliment I was hoping to avoid. (Laughter.) When your image is captured for posterity, my motto is the sooner the better. (Laughter.)

With so many familiar faces here today, it gives me the opportunity to thank all of you for your support and friendship over the past eight years. President Bush and I have had such a special privilege of being able to represent the people of the United States. We'll return to Texas with cherished memories of our friends, our staff, and our time at the White House. Thank you for joining us at this moment of reflection and celebration. May God bless you all. (Applause.)

THE PRESIDENT: Secretary Clough, thank you for the introduction. Thanks for coming. I suspected there would be a good-size crowd once the word got out about my hanging. (Laughter.)

It's a tremendous honor to have my portrait added to this gallery's presidential collection. This is one of only two institutions with portraits of every President, starting with our first, George Washington. That means this exhibit now has an interesting symmetry. It starts with George W. -- and ends with George W. (Laughter.)

I am grateful to all the people who made this painting possible. I really appreciate your generosity. I thank the donors for coming today. They remind me of an interesting story about this collection. In 1857, the artist George Healy was commissioned by Congress to paint Presidents John Q. Adams, Van Buren, Tyler, Polk, Fillmore, Pierce, and Buchanan. But by the time Healy got to President Buchanan, the Civil War had broken out -- and an angry Congress held the former President to blame. And so when Healy presented his bill for Buchanan's portrait, the lawmakers refused to pay. Things are bad when even Congress refuses to spend money. (Laughter.)

I want to thank the artists. Sasha, you had it easy -- it does not take much to make Laura look beautiful. (Laughter.) Anderson had a bigger challenge. (Laughter.) And therefore, I needed to find a person who would do the painting that would be a good and forgiving friend. And so I want to thank my buddy -- my college classmate, Bob Anderson, for painting this portrait. It actually looks like me, which is a good sign. (Laughter.) You did a fabulous job.

This is not the first time that Bob has painted me. He had a warm-up -- he did my portrait for the Yale Club. Recently, I asked him what was different this time around. He said, well, this time around he had to use a lot more gray. (Laughter.) I also understood Bob didn't have any difficulty depicting my eyes or my hands -- but he had a lot of trouble with my mouth. I told him, "That makes two of us." (Laughter.)

A former Washington resident once said: "Whenever you hear about somebody being done in oil in this town, you can't be sure whether that means painting, or boiling." (Laughter.) That was a wise observation from a good and decent man -- one who has offered me a lot of wisdom and advice throughout my life, and I am proud to have my portrait in the same room as President 41, George H. W. Bush. (Applause.)

It's a humbling experience to be included here among so many extraordinary leaders. One of the great things about this collection is that visitors can examine the faces of the men who have shaped our nation's history -- and study how history has shaped them. In each of their images, we're reminded of the incredible joys and responsibilities that come with the presidency. Yet in these two centuries of history, we're also reminded that this office -- and the enduring ideals it represents -- are greater than any person.

Being the temporary custodian of the office has been a privilege of a lifetime. Over the past eight years, I have been inspired by the character and courage of our nation -- especially the men and women of our Armed Forces. I have been moved by the compassion of our citizens -- from those who mentor a child to those who save lives around the world. Most of all, I've been uplifted by the many Americans who have sent their prayers.

And so, with deep gratitude, I offer my own: For all of you in this room, for the success of our next President and those who follow, and for God's continued blessings on our wonderful nation. Thank you. (Applause.)