For Immediate Release
Office of the Press Secretary
December 18, 2008

MRS. BUSH: I was hoping to introduce you all -- have a seat, everybody.

THE PRESIDENT: Unless, of course, you don't have a chair. (Laughter.)

MRS. BUSH: This is the day -- (inaudible) -- video conference includes Afghanistan with women entrepreneurs. And this is the day that Jack DeGioia becomes the co-chair now of the U.S.-Afghan Women's Council, which now will be formally moved to Georgetown University. And Phyllis Magrab -- where's Phyllis, there's Phyllis -- will be the vice-chair -- is that right, what you're going to be called? 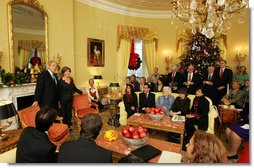 And so everyone that's in this room are people who have been involved either in mentoring Afghan women in some way, or just involved in the U.S.-Afghan Women's Council. A lot of people are with USAID and actually working in Afghanistan. We have Afghan-American women who've gone back home to Afghanistan to work there and partner with women there.

So I think this is a day to celebrate everything that we've done since -- what year was that -- 2003 -- 2002, since the Council started, and now -- and for us, as Jim Kunder, the USAID person, said, to redouble our efforts to recommit to working on the -- what will be sort of the next stage of mentoring women and making sure Afghan women get the support -- financial support, but more than that the emotional and educational support they need to be able to succeed and to help Afghanistan succeed.

So thank you for coming out here. (Laughter and applause.)

THE PRESIDENT: Well, thank you for inviting me. (Laughter.) A couple of things: One, Jack, thanks very much for lending the prestige of Georgetown to advance a noble cause that I agree is in our nation's national security interests and our moral interests -- and that is the empowerment of women in Afghanistan.

And I'm so proud of Laura. (Applause.) She could have come in and said, oh, why did you drag me into this -- (laughter) -- but instead chose to use her position to take on some important causes. And the advancement of women's rights in Afghanistan or freedom in Burma are noble causes that are essential to the peace of the world. And so I thank you for your leadership on this.

I just came back from Afghanistan, Ambassador, and I told the people there that the United States will not forget them; that it's essential that the people in Afghanistan realize that even though the Presidents have changed, our commitment to Afghanistan remains very strong -- at the governmental level, as well as in the private sector. And I am confident that the Afghan Women's Council sends that same signal -- that you can take a risk for peace and freedom; that your courage won't be -- won't be really isolated in the face of thugs who can't stand the idea of women having freedom.

And so I take great heart in knowing that the Afghan Women's Council will survive beyond our time. Having said that, I can assure you that Laura is going to be involved. (Applause.) And so will I if she lets me. (Laughter.)

Anyway, I'm off to give a little talk here, but I did want to come by and thank you all very much. I thank you for representing the best of America. And I thank you for recognizing that sometimes hard things require a lot of effort. It is really hard to go from tyranny to freedom. But it's going to happen. It is inevitable -- because freedom is universal.

And so I'm glad to come by, and thanks for letting me butt in. (Laughter and applause.)

MRS. BUSH: The Ambassador wants to say something, too.

AMBASSADOR JAWAD: Just to add, I just want to say how grateful we are to President Bush for giving us the gift of freedom, and for Mrs. Bush to work on making this freedom sustainable by providing Afghan women with education and economic empowerment. We are very fortunate to have a friend like President Bush and Mrs. Bush. And your contribution will have a lasting impact on the lives of millions of women in Afghanistan who will now have the right to have a chance for a decent life.

We are all very fortunate to have a friend like you. The Afghan history, the history of humanity, will remember you and Mrs. Bush for what you did for freedom, and especially for women empowerment, as part of your job. We are very grateful for that.

DR. DeGIOIA: I, too, just want to add my word of gratitude and appreciation to Mrs. Bush for the trust and confidence you have in Georgetown University to take on the role that we will now play.

We've been engaged with our colleagues in Afghanistan over the course of the last six years. On the very first visit of President Karzai to the United States we had the privilege to welcome him to Georgetown University. And we've had on other occasions had the opportunity to host two summits, international summits, on the reconstruction and recovery of Afghanistan.

But in this new venture with the support of our Center for Child and Human Development, under the leadership of Dr. Phyllis Magrab, we are honored to have this opportunity to continue and to deepen our engagement and support of the people of Afghanistan, especially in this urgent effort to empower women in the future. So we're truly honored to have this opportunity, and we want to thank you for your leadership and for the confidence you have in us.

MRS. BUSH: Thank you so much. (Applause.)