For Immediate Release
Office of the Press Secretary
December 15, 2008

PRESIDENT KARZAI: (Not translated.) Most welcome, Mr. President; most welcome.

PRESIDENT BUSH: Thank you, sir. Thanks, Mr. President, it's good to be with a dear friend. You and I have spent a lot of time together and we have done a lot of work together, all aiming to give the people of Afghanistan a better life. I'm glad to be with you. 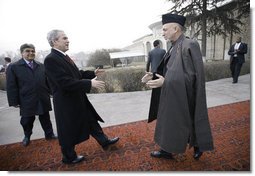 I hope you understand why it is important for me to get back to Washington -- and that is because my wife expects me to be back in Washington. (Laughter.) We have a holiday reception at the White House and so I'm going to have to hustle back -- after all, I did sneak out of town under the dark of night. And now I'm going to go back home having visited this important country. So thanks for having me. And she sends her best. As you well know, that Laura's -- one of her great passions is to stand with the courageous women in Afghanistan. And I can assure you, Mr. President, that after our time in Washington, we both look forward to continuing to stay in touch and to continuing to stay engaged with the people of Afghanistan. So Laura sends her deep respect and great affection for the people of Afghanistan.

You know, I was thinking when I -- right before we landed, how much Afghanistan has changed since I have been the President. Sometimes it's hard when you're in the midst of a difficult situation, it's hard to get perspective. In 2001, the Taliban were brutally repressing the people of this country. I remember the images of women being stoned, or people being executed in the soccer stadium because of their beliefs. There was a group of killers that were hiding here and training here and plotting here to kill citizens in my country.

Right after the attacks I made it abundantly clear that we would bring people to justice for our own security; and made it abundantly clear that if a group of people harbored a terrorist, they were equally as guilty as a terrorist. And we gave the Taliban an opportunity to respond. They didn't. And American troops proudly liberated the people of Afghanistan. That's what life was like.

And we could have replaced one power person with another. That would have been, I guess, the easy route, and then just left it behind, say we've done our duty and we've upheld the doctrine -- and said, okay, we're now going to take this group, replace them with this group -- and just got out of the way. But that's not -- that, one, didn't learn the lessons of the '80s and the '90s. And secondly, the interest is to build a flourishing democracy as an alternative to a hateful ideology. And it's not easy work. Afghanistan is a huge country. The road system is not nearly as well developed as a lot of other countries. You're just beginning to develop your resource base in a way that I hope benefits the people of Afghanistan -- after all, it's their resources.

It's difficult because extremists refuse to accept the beauty of democracy. They've got a different vision, and so therefore they're willing to kill innocent people to achieve their objectives. 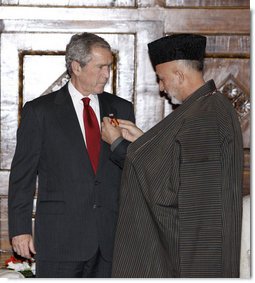 There has been a lot of progress since 2001 -- after all, girls are back in school. I happen to believe that's important. As a father of twin girls, I couldn't imagine living in a society where my little girls couldn't have a chance to realize their God-given potential.

You've got boys flying kites again in Afghanistan. You've got health clinics up all across the country. The President was telling me of a health clinic in the remote northeast region of Afghanistan -- a place where it had been unimaginable.

There's been good progress made, but there are a lot of tough challenges. One of the great, interesting things that I'll be watching -- since I believe so strongly in democracy -- are the upcoming elections. And I've talked to General McKiernan, he said -- told me that -- about the strategy, along with Ambassador Wood, about the strategy to help the Afghan folks, the military, and political leaders; get the elections up and running. It's going to make signing time for the people of Afghanistan -- to go to the polls and be able to express their opinion. And I'm sure the press corps, the Afghanistan press corps is looking forward to covering the elections. It'll give you something to do in a very important part of your country's history.

So Mr. President, I come bringing the greetings of the country. It has been a privilege to work with you over these years. I have come to admire you, I appreciate your service, and I wish you and the people of Afghanistan all the very best. 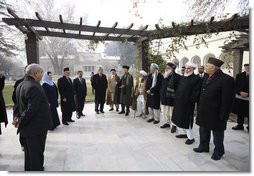 PRESIDENT KARZAI: (Inaudible), Mr. President, it's a pleasure and honor.

And second, regarding he said he was in Pakistan and the terrorists in Pakistan, what's your message to Obama that how he should deal with Pakistani government regarding terrorists, about the diplomat -- using diplomatic ways or using leverage?

PRESIDENT BUSH: Thank you. First, I am of a different political party than President-elect Obama. But I want him to succeed. I want him to do well. And to this end we have worked hard to help -- to help the transition.

I expect you'll see more U.S. troops here as quickly as possible in parts of the country that are being challenged by the Taliban. I remember when President Karzai and President Musharraf and I had the famous dinner at the White House. You know, the discussions really are the same today as they were then -- and that is that extremists and terrorists and people who use car bombs and suicide bombers to achieve political objectives are a threat to all of us. And that there needs to be a comprehensive strategy in helping the Pakistan government deal with those who bring great harm on their citizens -- and bring harm on the citizens of Afghanistan.

So to answer your question, I think it's a -- we need to have a collaborative strategy. We need to work together in a constructive way. And we are making progress along those lines. You know, I was with President Zardari in -- I think it was in New York. And I had never met him before and I was reminding him that I'm a -- you know, a person who says that we will defend our country and defend our people. The most important job for the President of the United States is defend our people from attack.

He said, you don't have to talk to me about extremists attacking people -- extremists killed my wife. And so we're -- there's a lot of consultations going on with the President -- I think you're going to be meeting with President Zardari soon, and that's good and I appreciate that. 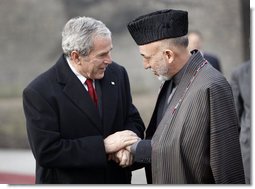 Q Thank you, gentlemen. I have one question for the two of you. Canada has announced it's pulling out in 2011; South Korea is already gone. In that context are you concerned about the level of international support for the war here, and are the 20,000 additional U.S. troops enough to bring this conflict to a close?

PRESIDENT BUSH: Well, first of all, as you know, I've always relied upon our military commanders to make the recommendations necessary to achieve the objectives we've set forth. We have added troops twice during my presidency -- obviously in the initial move in and then we added troops to that. I've announced we're going to send in more troops. And then, of course, the Obama administration will be analyzing the situation and it sounds like that they intend to expedite sending more troops in.

And why do we do that? Because this is what our generals suggest we do, to answer your -- it's just going to be a long struggle, first of all. This doesn't end tomorrow. Ideological struggles take time. As a civil society whose firm political institutions begin to develop, extremism begins to wither -- it gets marginalized and then it withers away. So it's going to take time. I can't tell you the troop levels we'll be -- all I know is our generals said, this is what we need now. And I listened to them and I'm confident President-elect Obama will listen to the commanders as well.

PRESIDENT KARZAI: We're already very grateful to all those countries, nations who have come to help Afghanistan, and who have already helped Afghanistan. Canada is among the countries that's the frontrunner in assistance to Afghanistan. Their plans to withdraw their troops by 2011 or '12 is not in contradiction to the understanding that we have with them. They will continue to assist us in various other forms in Afghanistan.

What is important here is that while we are continuing to fight terrorism and to bring institutional strength and stability to Afghanistan, we're going to improve the economy and improve the governance and services to the republic by the government. We also work on enabling Afghanistan to eventually stand on its own feet. The Afghan people don't want to be a burden on the international community forever. And we are grateful already that the international community is helping us in blood, and their taxpayers' money. 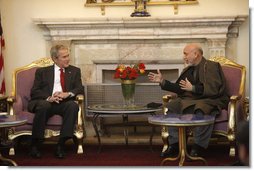 One more question, Mr. President? You like to continue?

PRESIDENT BUSH: All those who want another question, raise your hand. (Laughter.) I guess so, Mr. President.

PRESIDENT BUSH: I respectfully disagree with you. The Taliban was brutalizing the people of Afghanistan. And they're not in power. And I just cited the progress that is undeniable.

Now, is there more work to be done? You bet. I never said the Taliban was eliminated, I said they were removed from power. And I said girls are going back to school, and boys are flying kites and health clinics are opening, and the number of university students is dramatically expanding, and the number of schools around the country is growing, and there's a ring road built. Yes, there's no question there's a Taliban that wants to fight back. Why? Because they want to regain power. They can't stand the thought of a free society. And they're lethal. And they are tough. No question about it. No question about it.

So therefore, is the suggestion because they're tough that we just withdraw, that it's too hard work? Not as far as I'm concerned. I think it's necessary work. And it's in the interest of the United States that we not allow Afghanistan to become a safe haven again for al Qaeda. Al Qaeda is greatly weakened since 2001. As a matter of fact, they at one point declared the most central front in the war on terror in Iraq -- where they're doing very poorly.

And they're not doing so well here, either. Now, they can hide in remote regions. They can hide, but we will stay on the hunt and we will keep the pressure on them, because it's in the people -- the peaceful people of Afghanistan's interest, just like it's in the interest of this country.

And so is there still difficult days ahead? Absolutely. But are the conditions a lot better today in Afghanistan than they were in 2001? Unquestionably, undoubtedly, they're better.

Q Thank you, Mr. President. If I could ask President Karzai first -- we just came from Iraq, where they've signed an agreement outlining a security arrangement, and it includes a withdrawal of American forces within three years. I wonder if you envision a similar kind of arrangement where -- would you like to see a scheduled withdrawal or a timetable of withdrawal for the foreign forces who are in Afghanistan.

PRESIDENT BUSH: Yes, you better hurry up, in my case. (Laughter.)

PRESIDENT KARZAI: Take care. Thanks very much. Thank you.