For Immediate Release
Office of the First Lady
December 15, 2008

MRS. BUSH: Thank you very much. And it is sort of a bittersweet time. I'm so happy to be here, but this will be my last time to come at Christmas to Children's Medical Center, and this time I have two great escorts, Elmer and Dania -- thank you both for escorting me -- and, of course, Santa. (Applause.)

So I picked a book that I think you all will like a lot, and it's kind of instructive. It's about what you do when you write Santa a letter. So you wonder what -- see what happens to this little boy, and the name of the book is "My Penguin Osbert." See his penguin? And guess what his penguin wants to do? Be out in the snow all the time. So look what the little boy has to do -- he has to wrap up, doesn't he? Can you see, Elmer? Do you want to come around? Okay, good. 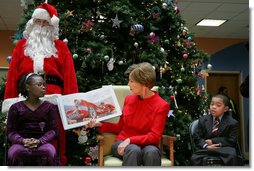 That was a cute book, wasn't it? (Applause.)

Now, every year since we started making BarneyCam -- that's where Barney, our dog, and Miss Beazley, our other dog, and Willard, our cat, star in a video that goes up on the website, the White House website -- and so every year I've introduced it here first. So you all get to see BarneyCam first before it goes on the website, and then you can look at the White House website later and see it again.

This year, President Bush and I went to the Olympics, and when Barney heard about it, he became very interested in the Olympics, and I think you'll see that. So this year it's "A Red, White and Blue Christmas" for BarneyCam. Can you all see a screen? There's one, here's one, there's one. Okay, are we ready?

MR. ZECHMAN: That was great. Thank you. Mrs. Bush has time for a couple of questions. Who has a question over here? Do you have a question?

MRS. BUSH: Did you have one?

Q What are you giving the President for Christmas? (Laughter.)

MRS. BUSH: Well, actually I haven't bought anything for him yet, because we're getting ready to move back to Texas, and we bought a new house. So that may be our big -- biggest Christmas present for both of us -- (laughter) -- for the next few years.

Q What does your family do on Christmas Eve?

MRS. BUSH: On Christmas Eve? We used to -- we like to have a big Christmas Eve dinner, and we're going to be at Camp David for Christmas with all of our whole family, all of George's brothers, and his sister, and their spouses, and all their kids, and President Bush and Barbara Bush, and Barbara and Jenna Bush, our daughters, and Henry Hager, our new son-in-law. So there are going to be about 32 of us, I think, at Camp. 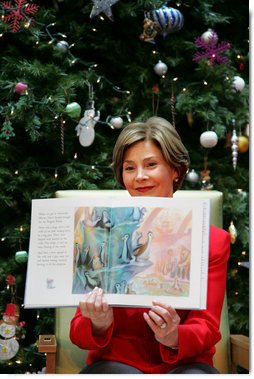 So we'll have a big -- we like to have, because we're Texans, we like to have enchiladas and tamales for our Christmas Eve dinner. Then we have turkey the next day on Christmas day. It'll be real fun to have the whole family.

Q What did you ask Santa for this year?

MRS. BUSH: Who asked that? Oh, did you ask that question? You're so cute. (Laughter.) I haven't really asked him anything, but I want for all the children in the United States to be happy and healthy this Christmas. (Applause.)

MR. SNOWDON: I'm Dick Snowdon; I'm the Chairman of the Board of the children's hospital, and I want to thank you all for coming, and especially to Mrs. Bush. And thank you for eight years of loyal and generous support, not only for this but as Ned said, for all you've done for the hospital. And by the way, any time you come back from Texas, you're welcome to come visit.

MRS. BUSH: Yes, they're great. Thank you all. You're terrific. (Applause.) 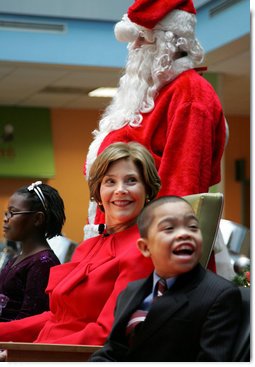 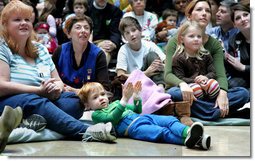