For Immediate Release
Office of the Press Secretary
December 14, 2008

THE PRESIDENT: Thank you for coming out to say hello. General, thank you for the introduction, I am honored to be at Camp Victory.

THE PRESIDENT: Laura and I have been having a lot of Christmas parties at the White House, so I thought it would be kind of neat to change the scenery. 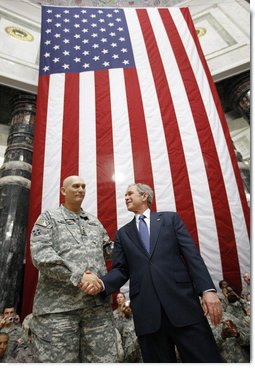 THE PRESIDENT: And I would rather be with the men and women of the United States military than with anybody else. (Applause.)

So as you can see I decided to fly over, and in the spirit of the season we renamed Air Force One to Rudolph One.

THE PRESIDENT: Thanks for coming. I bring greetings from a proud and grateful nation -- Merry Christmas to you, happy holidays. Congratulations on your inspiring accomplishments here in Iraq. And above all, thank you for volunteering to defend our country in a time of danger.

THE PRESIDENT: This is a time of year to give thanks for our many blessings B- and the greatest blessing we have is freedom and the fact that we've got a United States military to defend that freedom.

So General, thank you very much for your leadership. I'm proud to be with you again. I appreciate the leadership of General Austin, as well. Ambassador Crocker and Christine are with us today. I had the pleasure of meeting Sergeant -- Command Sergeant Major Lawrence Wilson; Command Sergeant Major Joe Allen; Major General Hammond -- (applause) -- put it together for Hammond. (Laughter.)

THE PRESIDENT: Major General Oates. (Applause.) How about, have you ever heard of a guy named Redmore? (Applause.)

Thanks for coming out. I am thrilled to be here with the diplomats, embassy personnel who are so critical to our success.

I want to thank the Iraqi citizens who are here with us today. I appreciate your courage. I know there are members of the coalition who are here with us. There have been a lot of troops from around the world who have come to help this young democracy survive and thrive. And so I want to thank the citizens of those country [sic] and the troops who have served here before us.

This is my fourth trip to Iraq -- and you've probably heard I'm heading into retirement -- (laughter) -- so it's going to be my last trip as the President. But thanks to you, the Iraq we stand in tonight is dramatically freer, dramatically safer, and dramatically better than the Iraq we found eight years ago.

THE PRESIDENT: And as a result of the sacrifices of our troops, America is safer, and America is more secure.

THE PRESIDENT: I want to take you back to what life was like eight years ago here in Iraq. Iraq had a record of supporting terror, a record of developing and using weapons of mass destruction, was routinely firing at American military personnel, systematically violating United Nations resolution. Life for the Iraqi people was a nightmare, with Saddam Hussein torturing and murdering anyone who did not support his repressive rule. Iraq was a sworn enemy of the United States at the heart of the Middle East; the region was a serious threat to the us. 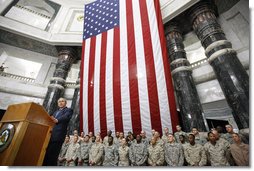 After the attacks of September the 11th, 2001, America concluded we could not tolerate a regime like this in a pivotal region of the world. I gave Saddam Hussein a chance to peacefully resolve the question as to whether or not he had weapons of mass destruction. You might remember, I went to the United Nations, where a body said: disarm, disclose, or face serious consequence. It was his choice to make. And he made the wrong choice. And so the United States military, with a vast coalition removed this man from power and the world is better off for it. (Applause.)

THE PRESIDENT: I doubt in his worst nightmares he ever would have dreamt that we'd be standing in one of his palaces.

THE PRESIDENT: Thanks to you, 25 million Iraqis are free.

Thanks to you, Iraq is no longer sponsoring terror -- it is fighting terror. It's making American people safer as a result.

The enemies of freedom in Iraq are determined, and this fight has been tough. Two years ago, the situation had grown dire -- the political process was frozen and sectarian violence was spiraling out of control. Some of you were here then/

Many said the mission was hopeless; many called for retreat. Retreat would have meant failure -- and failure is never an option.

THE PRESIDENT: So instead of pulling troops out, we sent more troops in -- called the surge. And because of you and because of your courage, the surge is one of the greatest successes in the history of the United States military.

THE PRESIDENT: Terrorists who once held safe havens across the country are being driven out of their strongholds. The political process that was once stalled is moving forward. Iraqi citizens once afraid to leave their homes are going back to school, and shopping in markets, and leading a more normal life. And American troops are returning home because of success.

THE PRESIDENT: The dramatic turnaround you led in Iraq culminated in the two agreements completed last month, which the Prime Minister and I affirmed in a ceremony earlier today. 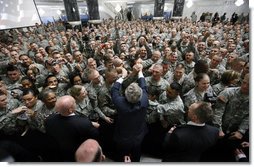 These agreements formalize the ties between our two democracies in areas ranging from security and diplomacy to culture and trade. These agreements show the way forward toward a historic day -- when American forces withdraw from a democratic and successful Iraq, and the war in this land is won.

And above all, I am confident because I know the character and the strength of those who wear the uniform of the United States military.

THE PRESIDENT: Over the past five years, you have shown the world some unmistakable truths:

You have shown that when America is tested, we rise to meet the test.

You have shown that the desire for freedom is more powerful than the intimidation of terrorists.

You have shown that there is no task too difficult for the United States military.

THE PRESIDENT: And so I have a message for you and all who serve our country: I want to thank you for making the noble choice to serve and to protect your fellow Americans. Sometimes it can be hard to tell when history is being made, particularly if you're in the middle of the action. What you're doing in Iraq is as important, and courageous, and selfless as what American troops did in places like Normandy and Iwo Jima and Korea. Your generation is every bit as great as any that came before it. And the work you do every day will shape history for generations to come.

I guess what I'm telling you is your grandchildren some day are going to say, "Thank God you showed up and served."

America now has a strong friend and a partner in the fight against extremism in the heart of the Middle East, and that is historic.

People across this troubled region of the world now have an example for a more hopeful path -- a model of liberty that can prevail over tyranny and terror. Killers who wanted to take the lives of Americans back home have been brought to justice before they reached our shores. 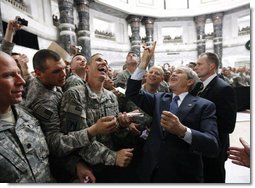 THE PRESIDENT: We think of those who have laid down their lives for freedom here in Iraq. Their children are growing up without a mom or a dad. But all of our children are growing up with something else -- the promise of a safer America and a better world. And that is the lasting memorial of all who have sacrificed here in Iraq. And thanks to you, that memorial will be achieved -- and their sacrifice will not be in vain.

THE PRESIDENT: We think of your comrades who have been wounded. And this nation pledges that we will give them all the care and all the support they need to recover.

THE PRESIDENT: We think of all your families back home. I know many of you have a sweetheart who misses you, or a daughter who longs for her dad, or a mom who worries about you day and night. For many of you, it won't be your first holiday away -- and that certainly doesn't make it easier. So I'm going to give you an order: When you get out of here, call home or email home; you tell your families you love them; and you tell the Commander-in-Chief came by to thank them for their sacrifice along with yours. (Applause.)