For Immediate Release
Office of the Press Secretary
December 10, 2008

The Presidential Citizens Medal was established in November 13, 1969, to recognize U.S. citizens who have performed exemplary deeds of service for the nation. It is one of the highest honors the President can confer upon a civilian, second only to the Presidential Medal of Freedom. 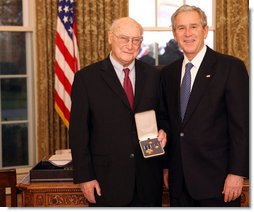 Today, the President will present twenty-three individuals with the Presidential Citizens Medal and one award posthumously.

Dr. Mitch Besser has provided hope, healing, and encouragement to women living with HIV/AIDS worldwide. Through his hard work and commitment to excellence, he has developed innovative strategies to reduce mother-to-child transmission of this terrible disease. The United States honors Mitch Besser for his generous spirit and his determination to stop the HIV/AIDS pandemic.

For more than two decades, Dr. James H. Billington has overseen the largest library in the world and our Nation’s oldest Federal cultural institution, the Library of Congress. A champion of interactive and innovative technology, he has helped connect countless individuals with resources to help them learn about defining moments in the life of our Nation. The United States honors James H. Billington for his stewardship of the Library of Congress and his dedication to strengthening the cultural life of our Nation.

A brilliant inventor and scientist, Dr. Forrest Bird developed the world’s first reliable, mass-produced medical respirator. Through his innovation, he has helped transform and enhance the quality of life for people around the globe. The United States honors Forrest Bird for his groundbreaking contributions and for his work to keep America at the forefront of discovery.

As a public servant, author, and humanitarian, Ward Brehm has committed himself to enhancing economic and social development in Africa. He has worked in partnership with the people of Africa to provide clean water to rural communities, fight poverty, and extend opportunity. The United States honors Ward Brehm for his work to replace disease and despair with healing and hope.

Ray Chambers has reached out to help at-risk youth and worked to turn the tide against malaria in Africa. By standing with the people of Africa in the fight against this treatable and preventable disease, he has helped lift a burden of unnecessary suffering. The United States honors Ray Chambers for his steadfast commitment to mentoring young people and his noble work to eliminate malaria.

For more than three decades, Chuck Colson has dedicated his life to sharing the message of God’s boundless love and mercy with prisoners, former prisoners, and their families. Through his strong faith and leadership, he has helped courageous men and women from around the world make successful transitions back into society. The United States honors Chuck Colson for his good heart and his compassionate efforts to renew a spirit of purpose in the lives of countless individuals. 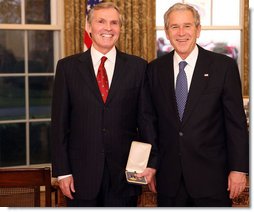 General Wayne Downing was an American hero who stepped forward to help defend our Nation and uphold the ideals of our founding. He answered history’s call with honor, decency, and resolve, and he earned the respect and admiration of a grateful Nation. The United States honors Wayne Downing for his selfless service that continues to inspire us as we work to advance peace and extend freedom around the world.

Mike Feinberg and Dave Levin recognize the importance of educating our next generation of leaders. By developing innovative programs in inner-city communities, these educators have helped young people develop the knowledge and skills needed to succeed in school and in life. The United States honors Mike Feinberg and Dave Levin for their work to encourage youth to make responsible choices and build a solid foundation for a lifetime of accomplishment.

By devoting his time and talents to his fellow veterans, Arnold Fisher has helped America fulfill its obligations to those who have defended our freedom. His compassion and dedication to our military families reflect the best of the American spirit. The United States honors Arnold Fisher for his service to our country’s veterans and their families and for demonstrating the generous and grateful heart of America.

Father John Foley has successfully reached some of our Nation’s most vulnerable youth and instilled in them a love of learning. Through his spiritual leadership of a faith-based education system that partners with the community, he has provided opportunities for young people to achieve their dreams. The United States honors Father John Foley for his commitment to helping his fellow citizens lead lives of integrity and achievement.

With wisdom and integrity, Dr. Robby George has brought forceful analytic clarity to the study of America’s ideals and institutions. He has helped strengthen our Nation’s system of ordered liberty by exploring enduring questions of American constitutional law and Western political theory. The United States honors Robby George for his many contributions to our civic life.

As a lawyer, public servant, and philanthropist, Samuel Heyman has acted on his steadfast devotion to our Nation. By encouraging young leaders to answer the call of public service, he has helped promote a vibrant Federal workforce. The United States honors Samuel Heyman for his dedication to improving the efficiency, transparency, and accountability of the Federal Government.

Wendy Kopp is an education innovator who believes that every child can learn if given a chance. Through her determined efforts, she has created opportunities for new teachers to help disadvantaged children realize their potential. The United States honors Wendy Kopp for her strong leadership in ensuring a quality education for students across America.

As a physician, organic chemist, and Chairman of the Department of Medicine at Columbia University, Dr. Donald Landry has applied his passion for discovery to expanding human knowledge and improving patient treatment. A man of science and a man of faith, he has demonstrated that there are responsible and ethical ways to advance stem cell research. The United States honors Donald Landry for his diverse and pioneering research and his efforts to improve the well-being of his fellow man.

A tireless public servant, Andrew Marshall has helped protect our citizens and preserve the ideals that make our country strong. His expertise and advice, spanning seven Presidential Administrations, has bolstered our Nation’s security and advanced the cause of freedom. The United States honors Andrew Marshall for his service, patriotism, and selfless devotion to the Nation’s security.

Reflecting a spirit of compassion and leadership, Donald Powell answered the call of public service, offering hope to those in need. With vigor and firm resolve, he helped coordinate Federal support for the rebuilding of the Gulf Coast following the devastating hurricanes of 2005. The United States honors Donald E. Powell for his compassionate and dedicated service to fellow citizens. 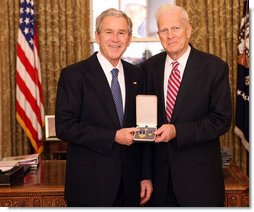 Anne-Imelda Radice is a skilled administrator, art historian, and museum professional. Through her career in public service, she has worked to enhance the intellectual and cultural development of all Americans. The United States honors Dr. Anne-Imelda Radice for her commitment to excellence and her dedication to providing people of all ages the resources to explore new ideas and better understand the world around them.

Father Timothy Scully has committed his life to strengthening communities through faith-based education that prepares individuals for a lifetime of achievement, service, and compassion. Through his leadership at the University of Notre Dame, he has developed innovative ways to support under-resourced schools. The United States honors Father Timothy Scully for demonstrating that every human being has boundless potential.

Gary Sinise is a humanitarian and a patriot. Working alongside our military and reaching out a compassionate hand to Iraqi children, he is helping a society once brutalized by a tyrant to rebuild and realize the great blessings of liberty. He has also travelled the world to show America’s gratitude to our service members. The United States honors Gary Sinise for his efforts to improve the human condition and his strong commitment to the selfless men and women who devote their lives to military service.

As a decorated military leader and innovative public servant, Admiral James Watkins exemplifies the American ideals of courage, character, and ingenuity. He has brought great skill and determination to all of his duties and demonstrated a patriot’s devotion to our country. The United States honors James Watkins for his distinguished and varied public service.

Through his compassion and leadership, Robert Woodson has improved the lives of his fellow citizens and worked to make our country a better place. His work in low-income neighborhoods reflects the good heart of our Nation and the great strength of the American character. The United States honors Robert Woodson for giving his time, talents, and energy to creating a brighter and more hopeful future for his fellow citizens. 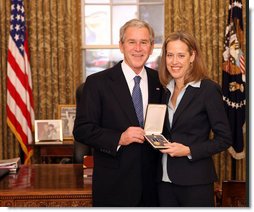 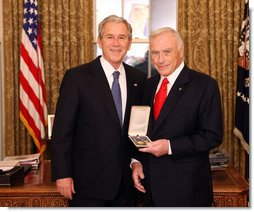 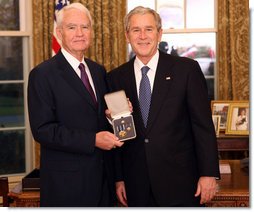 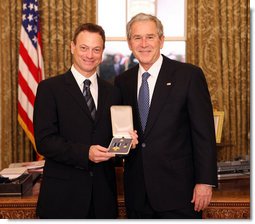 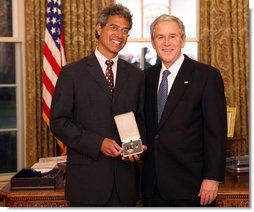 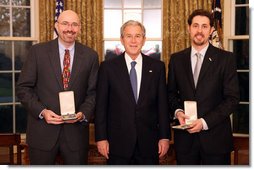 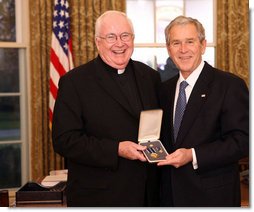 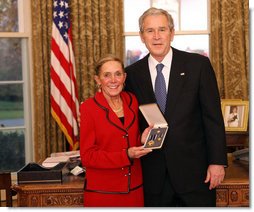 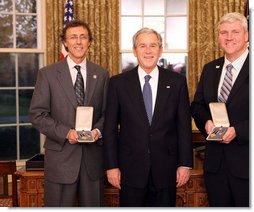 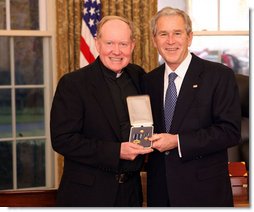 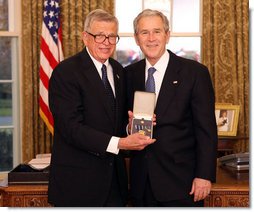 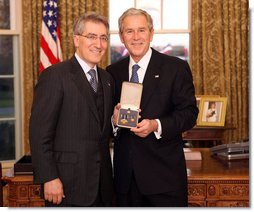 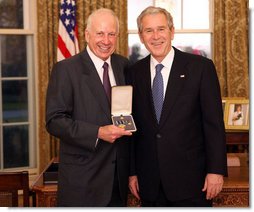 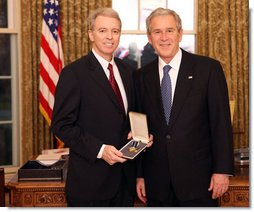 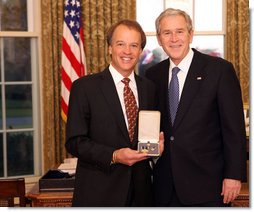 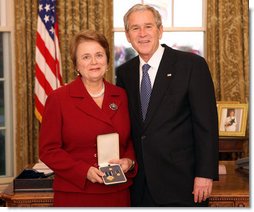 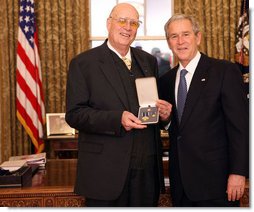