For Immediate Release
Office of the Press Secretary
December 8, 2008

THE PRESIDENT: I have just spent a fascinating morning here at the NCTC. The NCTC is a place where our government gathers threat assess -- or threats and intelligence to better protect the American people.

I want to thank both Mikes for taking a strong lead in doing our most important job, which is to motivate people to protect this country, and that's what takes place here. 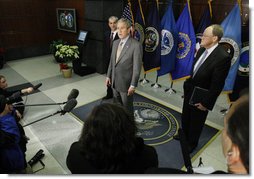 There's a lot of hardworking Americans who -- this -- by the way, this center is up 24/7. And anytime a piece of data comes in that portends any kind of threat, it's analyzed and, if need be, acted upon.

So, most Americans don't know this facility exists. It came to be after the September the 11th attacks, when we all came around and asked the question: How better can we protect the country?

And so I've come by to thank the -- all the people who work here, and -- because they deserve our thanks. They deserve a government that understands that the biggest danger we face is from a terrorist attack, and that the best way to defend the country is to stay on the offense and keep the pressure on them constantly, and at the same time spread freedom as the great alternative to the ideology of those -- of the killers.

This is a challenge that's going to face this country for a while. But it's a challenge that can be better met because of facilities like the NCTC -- and the fact that we've given the professionals the tools, such as listening to the terrorist phone calls, to better protect America.

And so I want to thank you all for your leadership. Appreciate you having me. And again, I thank all the good folks who work here for their dedication.