For Immediate Release
Office of the Press Secretary
December 6, 2008

THE PRESIDENT: Good morning. Welcome to my hanging. (Laughter and applause.) Thank you for coming and thank you for your warm welcome.

First, I'd like to compliment Mark Carder. He did a really fine job with a challenging subject. (Laughter.) I was taken aback by how much gray paint you had to use. (Laughter.) It speaks more about my job than yours. (Laughter.) But thanks a lot, it's been a joy to work with you and I'm confident this portrait will stand the test of time. 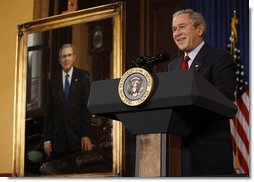 I want to thank Fred and Frank for welcoming me here. I thank you for the medal. I'm keeping pretty good company, which I will speak about in a minute.

First of all I do want to thank the board of directors of The Union League for taking time out of your Saturday to be here. And I appreciate all the guests who have come, as well.

I particularly want to say thanks to my friend, Arlen Specter, for joining us. (Applause.) It's been a joy working with you -- most of the time. (Laughter.) He's a pretty independent-minded fellow -- (laughter) -- who is honest and decent. (Applause.) And like me, he married very well. (Laughter.) So Joan, thanks for being here, and I appreciate -- I appreciate you supporting this good man during some very difficult times. (Applause.)

I thank the Hoopers, for paying for this work. (Applause.) I thank Jim Straw and the Abraham Lincoln Foundation and the Foundation members who are here today. I appreciate you preserving the legacy of a -- of a good man.

I am -- it turns out this award had been given to folks I have had the honor of serving with: Vice President Dick Cheney, Secretary of Defense Don Rumsfeld, Secretary Tom Ridge -- three good men who are dedicated and patriot public servants.

I'm especially proud to be a co-recipient with a guy I call "41." (Applause.) The 1987 Gold Medal Award Winner -- a guy I call "dad," you call him "President Bush." We owe our achievements to the same savvy political counselor and firm disciplinarian: Barbara. (Laughter and applause.) And they're both doing well, by the way. (Applause.) Mother is coming out of the hospital. I hope they don't put this on TV, but she's a tough old bird -- (laughter) -- whose spirits are soaring high.

The motto of The Union League is "Love of Country Leads." You obviously love our country because you continue to lead in ways that make Philadelphia a more compassionate place, and I want to thank you for that. I appreciate the fact that you have mentoring programs and internships and scholarships. That basically says the dream is for all who live in this country. I thank you for your efforts to preserve historical treasures. One can learn a lot from the past, and The Union League is doing its part to tell the true story of our great nation. 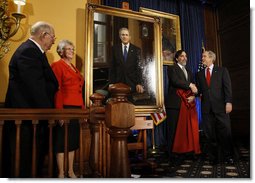 In short, I thank you for your service to your community and our country.

I found it interesting that the League was founded in 1862, to support President Lincoln in a time when his leadership was deeply controversial. (Laughter.) I know how he felt. (Laughter.)

But the principles on which he stood have stood the test of time: All men are created equal under God, he said, unflinchingly throughout his presidency. (Applause.) Liberty is given to every man, woman and child on the face of the earth. I believe, like Lincoln, there is an Almighty - (applause) - and a gift of that Almighty to every man is freedom. He has taught Presidents that you must act on your principles and make tough decisions, regardless of the political consequences. (Applause.)

I have been a - I have drawn strength from his example. I have learned lessons by reading about Abraham Lincoln. And I want to thank you for preserving his legacy. (Applause.)

And most importantly, I thank you for your kind words and your heartfelt prayers during the last eight years. It has been -- somebody said, what's it's like to be President? I said, some days you're happy, some days not so happy -- every day joyous to serve the United States.

God bless you, and God bless our country. (Applause.)