For Immediate Release
Office of the Press Secretary
December 5, 2008

THE PRESIDENT: Thank you all for coming. I am going to sign two documents -- one a Pearl Harbor Day proclamation, and the other creating the World War II Valor in Pacific National Monument. The National Monument will include nine sites -- five in Hawaii, three in Alaska, and one in California at the Tule Lake Segregation Center, which was where Japanese Americans were detained during World War II. 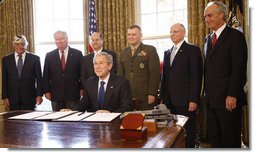 One of the great stories during World War II was that people fought bitterly to defend our country and way of life, and then worked to help our enemies develop democracies according to their own cultures and their own history. And today, I am so pleased to report that Japan is a strong ally of the United States of America -- an ally in defending our liberties and an ally in spreading liberty as the great ideological alternative to an enemy that still wants to do us harm.

And so this monument will help people realize the breadth and the history of World War II and its aftermath.

So I'm pleased to sign both documents, and I want to thank our distinguished visitors for joining me.

(The proclamations are signed.)