For Immediate Release
Office of the Press Secretary
November 29, 2008

THE PRESIDENT: On behalf of all Americans, Laura and I extend our condolences to those suffering from the terrorist attacks in Mumbai, India. We mourn those who lost their lives, including American citizens. We pray that the injured will recover. We pledge the full support of the United States as India investigates these attacks, brings the guilty to justice, and sustained its democratic way of life. 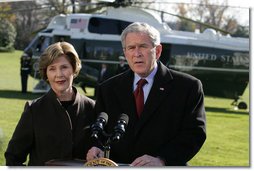 My administration has been monitoring the situation in India closely since the attacks on Wednesday. On Thursday morning, I spoke to Prime Minister Singh from Camp David. I sent our heartfelt condolences to the Prime Minister. This morning, I held a videoconference with Secretary Rice, our Ambassador to India, our Consul General in Mumbai, and other national security officials. We reviewed the latest developments, and we are working to ensure that American citizens in India are safe. Throughout the process, we have kept President-Elect Obama informed.

The killers who struck this week are brutal and violent, but terror will not have the final word. People of India are resilient. People of India are strong. They have built a vibrant, multiethnic democracy that can withstand this trial. Their financial capital of Mumbai will continue to be the center of commerce and prosperity.

The leaders of India can know that nations around the world support them in the face of this assault on human dignity. And as the people of the world's largest democracy recover from these attacks, they can count on the world's oldest democracy to stand by their side.

Thank you very much. May God bless the people of India.