For Immediate Release
Office of the Press Secretary
November 27, 2008


The President made telephone calls this morning to exemplary members of the Armed Forces who are stationed in remote locations worldwide to wish them a Happy Thanksgiving and to thank them for their service to our Nation. 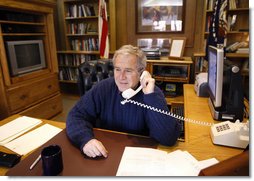