For Immediate Release
Office of the Press Secretary
November 26, 2008

THE PRESIDENT: Thank you, all. Please be seated. Welcome to the Rose Garden for the pardoning of the National Thanksgiving Turkey.

This is a tradition that dates back to the presidency of Harry Truman. Just to be safe, I will be pardoning a second bird -- (laughter) -- in the unlikely event the main act chickens out. (Laughter.) Turkeys are not only the ones on edge this morning -- you see, it turns out the Rose Garden is Barney's turf. (Laughter.) So the press corps is a little nervous, as well. (Laughter.) 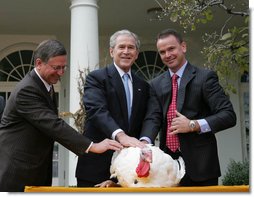 I appreciate the representatives of the National Turkey Federation who have joined us: President Joel Brandenberger; Chairman Paul Hill; Paul's wife, Mary June. Today's birds were hatched on the Hill family farm in Ellsworth, Iowa. Paul's son, Nathan, and daughter-in-law, Betsy, along with grandsons Collin and Connor, did a fabulous job of raising the guests of honor.

I also welcome the children here from Cloverly Elementary School. And after I make my brief remarks, you will be welcome to come up and pet our feathered friends.

This is an election year, so it is fitting that the names of these two birds were chosen through the democratic process. After a long, drawn out election season, when the people finally spoke, the name of the ticket sent here to the White House was Pumpkin and Pecan. (Laughter and applause.) Pumpkin is right there. (Laughter.) Pecan is in an undisclosed location. (Laughter.)

Pumpkin and Pecan have an exciting trip ahead of them: Later today, they will fly to Disneyland aboard "Turkey One." (Laughter.) Pumpkin will be the honorary Grand Marshal of Disneyland's Thanksgiving Day Parade. Together these birds will gobble the rest of their days in "The Happiest Place on Earth." I just hope they stay humble there. (Laughter.)

This is my final Thanksgiving as the President. Over the past eight years, I have been given many reasons to be thankful. I'm thankful to our men and women in uniform and I am incredibly proud to have been their Commander-in-Chief. (Applause.) I am thankful for the armies of compassion volunteers who feed the hungry and shelter the poor. I am thankful for the teachers and nurses and pastors police officers and firefighters, and others who serve their neighbors and better their communities. 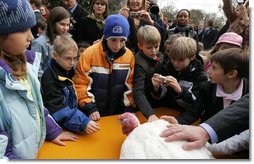 Most of all, I thank the American people for the tremendous privilege of serving as the President. In recent weeks, I've talked a lot about sprinting to the finish. Yet I've assured these turkeys they will not be trotting to their finish. (Laughter.) That's because in keeping with a longstanding tradition, Pumpkin and Pecan are hereby granted a full and unconditional -- unconditional presidential pardon.

I wish all Americans a happy Thanksgiving, and may God bless you. (Applause.)