For Immediate Release
Office of the Press Secretary
November 22, 2008

PRESIDENT BUSH: I'm pleased to be with a good friend and a strong leader, Prime Minister Stephen Harper. It's been a joy to work with you. And we've accomplished a lot together, relations between the United States and Canada are strong -- sometimes complicated, but nevertheless based on common values. I appreciate your candor, your strength of character and your consistent philosophy. So I'm looking forward to good discussions. I'm looking forward to this APEC -- I think it's very important for us to continue to work together during the time of economic turmoil. 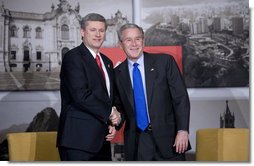 PRIME MINISTER HARPER: Well, I appreciate that, Mr. President, and I've appreciated the candor of our relationship, I've appreciated your openness. We've had many things we've agreed on and a few we haven't, but you've always been willing to listen. And Laureen and I certainly wish Laura and you all the best if I don't see you again before the 20th of January.