For Immediate Release
Office of the First Lady
November 21, 2008

MRS. BUSH: Thank you so much, and thank you very much for sharing your story. It was really, really very moving for all of us to hear it.

I also want to recognize, of course, the First Lady of Panama, my really good friend, Vivian Fernández de Torrijos. Thank you very much for being my host while we're here. Ambassador Barbara Stephenson, our U.S. Ambassador to Panama, is here in the audience. Thank you, Ambassador. Dr. Ana Gonzalez-Angulo, thank you very much for being a part of this morning's ceremony. And Annetta Hewko, the Vice President of International Affairs for Susan G. Komen, and all the distinguished ministers and guests, thank you all for coming this morning. 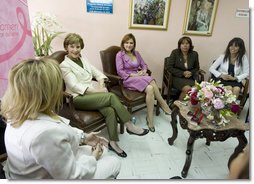 Twenty-five years ago, women in the United States were too embarrassed and fearful to talk about breast cancer. They didn't know how to protect themselves, and the disease was often diagnosed too late for successful treatment.

A lot has changed in 25 years. American women now know to get yearly mammograms, and do breast self-exams, and to research our family histories with breast cancer. Much of this progress is due to the Susan G. Komen for the Cure, which was established by my friend and our Chief of Protocol, Ambassador Nancy Brinker, to honor her sister, Susan.

Advocates like First Ladies Betty Ford and Nancy Reagan also helped raise awareness by making their diagnoses and treatments of breast cancer public. Today, more women in the United States are stepping forward to tell their own stories. And increasingly these stories are stories of triumph -- like the story of my mother, Jenna Welch, who is a breast cancer survivor.

Breast cancer is a growing public health issue in Latin America. Here in Panama, it's the second leading cause of cancer-related death among women. And just like years ago in the United States, many women have not been told about the steps they can take to save their lives.

American women want to share our experience with breast cancer with our sisters in the Western Hemisphere. Last July, I announced the Partnership for Breast Cancer Awareness and Research of the Americas to help our countries address the challenges of breast cancer together. This effort unites the medical expertise of the University of Texas M.D. Anderson Cancer Center with the resources of Susan G. Komen for the Cure and the commitment of the United States Department of State. It builds on the success that the United States Middle East Partnership for Breast Cancer Awareness and Research, which was launched in 2006.

The Partnership for Breast Cancer Awareness and Research of the Americas is mobilizing mothers, sisters, daughters, and friends to help spread a life-saving message that regular mammograms and breast self-exams lead to early detection, which today is the closest thing we have to a cure. 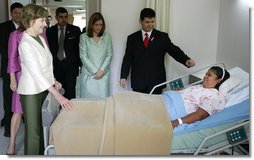 Panama has already had success in raising awareness. Last year, nearly 7,800 women received public -- received mammograms at public institutions, compared to just 680 four years ago. And I know that Vivian has made breast cancer a strong part of her role as First Lady, and we have Vivian to thank for this success. Thank you very, very much, Vivian. (Applause.)

Today, I'm happy to announce that Panama has been chosen to join the Partnership for Breast Cancer Awareness and Research of the Americas. This collaboration will help more women learn what they can do to protect themselves from breast cancer, and it'll help researchers in both of our nations share discoveries that one day we hope will lead to a cure.

Already, the Partnership is empowering whole communities in Latin America to take charge of their health. In Costa Rica, residents of Limon were inspired to start their own non-governmental organization, Limon United Against Breast Cancer. Previously, this city had no organizations dedicated to raising awareness of cancer, and it had only one mammography machine, which was broken.

Brazilian women are breaking their silence about breast cancer. One Partnership beneficiary said she now "talks to everyone about the subject -- at church, on the bus, and at the market." Another Brazilian woman, a psychologist, Eliane Sá Brito, is teaching women to perform breast self-exams, and supporting those who are diagnosed with cancer. She said, "I believe that I have a role that is as important as the doctors, and that is the role of the educator."

Our partnerships in Latin America recognize that every woman is a potential educator, and that all of us have something to learn. The U.S.-Panama Breast Cancer Partnership will add new voices to the global effort to end breast cancer. And here in Panama it'll help save women's lives.

In October at the White House, we saw how breast advocacy unites women across national borders. Researchers and activists from around the world joined us as we lit the White House pink in honor of Breast Cancer Awareness Month. And here in Panama, Mrs. Torrijos supported a similar effort. The Presidential Palace and more than 50 of Panama's hospitals, government ministries, banks and private businesses were illuminated pink throughout the month. 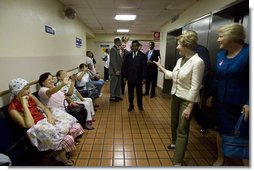 These illuminations make a bold statement that the people of Panama are committed to raising awareness of breast cancer. Today, our Partnership makes a bold promise: that our nations will work together until we've ended this disease.

Thank you all very, very much, and God bless you. (Applause.)