For Immediate Release
Office of the Press Secretary
November 19, 2008

THE PRESIDENT: Thank you. Laura and I are thrilled to be here. We are honored you would invite us to reopen one of the country's great civic institutions -- the Smithsonian's Museum of American History. This building is home to many of our national treasures. It is a reminder of our country's proud heritage. And today we're witnessing the beginning of an exciting new era in its history. And I would urge all our citizens who come to Washington, D.C.: Come to this fantastic place of learning. 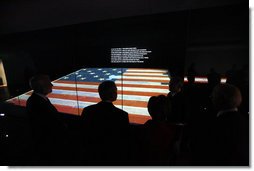 Wayne, thank you for serving; proud to be with you. Roger Sant, the Chair of the Smithsonian Institute's Board of Regents, and Vicki. I appreciate Brent Glass, the Director. I want to thank Dirk Kempthorne -- Mr. Secretary, thank you for being here. Jonathan Scharfen, Acting Director of U.S. Citizenship and Immigration Services, as well as Congressman [sic] Doris Matsui from California. I want to thank Governor Martin O'Malley of the great state of Maryland for coming here today. I am honored to be with Judy Woodruff, the esteemed Master of Ceremony -- Mistress of Ceremony, MC. I thank David McCullough for joining us -- a great historian and a fine American.

The items on display here are as diverse as our nation. Visitors can see George Washington's military uniform, one of Thomas Edison's early lightbulbs, the desk on which Thomas Jefferson drafted the Declaration of Independence -- even Muhammad Ali's boxing gloves, which he modestly predicted would become the most famous thing in this building. (Laughter.)

Another item on display here is one of our nation's proudest symbols of patriotism. The icon's fame dates to the war of 1812. In that conflict, the British Navy bombarded Baltimore's Fort McHenry with rockets and mortar fire. And as the battle raged, a young American was detained on a ship in Baltimore Harbor, unable to join the fight. The next morning, he was anxious to see whether his country had resisted the invasion. He discovered the answer when he saw the stars and stripes of the United States waving defiantly above Fort McHenry.

That young American, of course, was Francis Scott Key. He referred to the moment he saw the flag as an "hour of deliverance and joyful triumph." He recorded those emotions in a poem called "The Star-Spangled Banner." Today, nearly two centuries after they were composed, his words are written on the heart of every American -- and written into our law as our country's national anthem. And the flag that inspired them is preserved here, thanks to the generosity of some fine citizens, to remind us of the sacrifices that have been made to ensure our freedom. 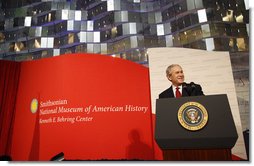 There have been hours in our nation's history when that promise of freedom looked uncertain. One of them took place 145 years ago today, when President Abraham Lincoln arrived in Gettysburg, Pennsylvania, to dedicate a cemetery at one of the Civil War's bloodiest battlefields. By that day, the war had raged for more than two and a half years, and claimed hundreds of thousands of casualties. Many were convinced that a peace that preserved slavery would be better than a war that was pitting brother against brother. President Lincoln understood that liberty is a gift given by the Almighty -- and that peace must not be purchased with injustice.

That day, President Lincoln called the nation together in the pursuit of "a new birth of freedom." He urged Americans to honor the dead by carrying out the cause for which they gave their lives. With only 10 sentences, he strengthened the bonds of our Union -- and rededicated our nation to the proposition that all men are created equal.

At the time, President Lincoln said that the world would "little note, nor long remember" his words. The verdict of history has been quite different. Over the years, the Gettysburg Address has been memorized by generations of schoolchildren -- including me and Laura -- stands as the greatest presidential speech of all time.

Nearly 50 years, one of the only handwritten copies of this speech has been kept at the White House. For the next several weeks, it will be on display here at the Museum of American History. And Laura and I are delighted that this important piece of our country's heritage will be available for all to see.

Among those inspired by the principles in the Gettysburg Address were four African American college students in Greensboro, North Carolina. In 1960, they sat at a lunch counter inside a Woolworth's department store and asked to be served. Their request was denied -- because the counter was designated as "whites only." When they were asked to leave, those brave students refused to give up their seats. The single act of courage helped power a national movement that culminated with the passage of the Civil Rights Act of 1964. And today, that lunch counter is preserved here at the Smithsonian -- in an honored location just down the hall from the Gettysburg Address.

In the lives of Francis Scott Key, Abraham Lincoln, and those brave students in Greensboro, we see the best of America. We see men and women of character who refused to surrender to adversity. We see hope, courage, and a devotion to universal values. And we see a nation constantly moving toward greater freedom and greater opportunity.

Throughout our history, these ideals have called out to those beyond our shores. They have beckoned those who love liberty from every nation. They have made countless generations of men and women across the world long for the pride that comes with calling yourself an American citizen. Today, I'm delighted to congratulate five of you who will be taking your oath of citizenship in just a few moments. Though you are originally from France, Germany, Guyana, Lebanon, and Peru, today you're becoming members of the American family. We welcome you with open arms. I will be proud to call you fellow citizen.

The Museum of American History is a wonderful place to begin your journey as an American. These halls reflect both the duties and privileges of citizenship. They remind us that America's highest ideals have always required brave defenders. They remind us that our liberty is a precious gift from God.

Thank you for having Laura and me here. May God continue to bless the United States of America. (Applause.)