For Immediate Release
Office of the Press Secretary
November 18, 2008

Fact Sheet: Improving Travel During The Holidays And Beyond

THE PRESIDENT: Thank you. Please be seated. Madam Secretary, thank you for the kind introduction. Thank you for the reception. I am honored to be with the men and women who work here at the U.S. Department of Transportation. I appreciate you giving me a chance to come by and visit with you today. I want to thank you very much for the great job you are doing to make sure that across America our railways and highways and airways are working to keep our citizens moving. You have done a terrific job, as far as I am concerned. The past eight years I have not seen a traffic jam -- (laughter) -- waited for an airplane -- (laughter) -- or had my bags lost. (Laughter.) 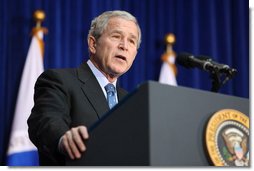 I appreciate very much the fabulous job -- and I emphasize fabulous job -- that the Secretary of Transportation, Mary Peters, has done and is doing for our country. And I want to thank you for your service, Madam Secretary. She has been an outstanding member of the Cabinet. She is a strong leader. I saw her leadership, as did the country, firsthand when Minnesota's I-35 bridge collapsed. The Secretary coordinated a swift and an effective federal response. Swift was important for the people in Minneapolis. Effective is always important when it comes to reminding our citizens that the government can respond in a way that will make them proud.

I appreciate the fact that she launched a thorough review of bridge safety across our country, and worked with the Congress to get the monies necessary to rebuild that bridge. The bridge reopened months ahead of schedule -- thanks in large part to the organization, determination of our Secretary and the people who work for her.

Madam Secretary, you did your job. That's what I expected when I asked you to serve, and I really want to thank you for your service.

I know that a lot of folks in our country think about transportation a lot, particularly this time of year. People getting ready to move around for Thanksgiving, and with Christmas not very far behind. And a lot of our citizens are nervous about travel. They're not nervous about their safety, but they're nervous about what the experience will be like -- the long delays, lost bags, overbooking of flights. One way to look at it is they're saying, will traveling home for the holidays be "It's A Wonderful Life," or will it be "The Nightmare Before Christmas." (Laughter.)

Our job is to make sure it is as comfortable an experience as possible. Now, obviously, the federal government can't control all aspects of how the airlines, for example, conducts their business. We're not in the business of managing airlines. We are in the business, however, of making it easier for airlines to do the job we expect them to do. 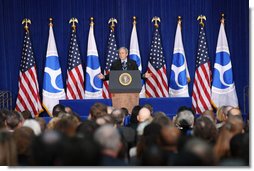 And so, to this end, you might remember, at Mary's recommendations, that we -- the military opened its East Coast airspace to civilian flights during the Thanksgiving holiday season. And it worked. This year, we're going to expand what we call the "Thanksgiving Express Lanes" to areas of the Midwest, the Southwest, and the West Coast, including the skies over Phoenix and Los Angeles. In other words, we innovated last year to ease the travel; it worked, and now we're expanding that innovation this year. We're also working with the FAA, the TSA, and the airlines to make more staff available to speed check-in and boarding, and to help passengers affected by cancellations and delays.

We have just completed new regulations that provide increased protection for consumers. These include measures that will require airlines to provide greater compensation for lost bags, as well as tougher penalties when airlines fail to notify travelers of hidden fees. I think that's a responsible role for government. I think it makes sense for us to, through this department, put regulation in place that stands side by side with consumers in a reasonable way.

We expect these rules to take effect in December, in time for Christmas and New Year's. These efforts represent our commitment to making this year's holiday travel season as smooth as possible. And, frankly, they are part of this administration's strong record on improving air travel for American consumers.

During my time in office, or our time in office, we have put regulations in place to make airlines more accountable for the way they treat passengers. In other words, we have done this kind of regulatory regime before -- notably doubling the fine airlines pay for bumping travelers off of overbooked flights. Our message is: We will hold you to account. The consumers will hold you to account, but we have a responsibility in government, as well, to help our air travelers.

This administration has signed agreements with the EU and India, Thailand and China, to increase flights between the United States and these countries. Makes it easier for Americans to travel around the globe. We have launched an unprecedented effort to reduce air congestion by boosting flight capacity at some of the busiest airports. The Department of Transportation over the past seven and a little more than three-quarters years, has completed 13 major airport improvement projects, including 11 new runways. This week three more runways will open at Seattle-Tacoma, Washington-Dulles, and Chicago-O'Hare -- bringing the total to 14, which is going to help ease aviation congestion coast to coast.

And for those of you in this audience who have worked on these projects, I thank you.

The administration has taken steps to address the source of most flight delays and cancellations across the country -- and that would be the heavy air traffic around New York City. To help untangle the skies over New York, we have improved our traffic control. We added a new departure route from the metro area and capped the total number of flights, providing nearly $90 million over the next eight years to upgrade taxiways at JFK. And in January, the FAA will start auctioning takeoff and landing slots at New York airports. This will increase competition for access to these airports, and we strongly believe increased competition will help lower fares to consumers.

I remember talking about this market-based approach, Madam Secretary, in the Roosevelt Room in the West Wing of the White House, and I thank you for implementing the vision.

Airlines need incentives. They need incentives to boost efficiency. And this incentive that we put out will encourage them to use larger planes out of the New York area. We believe these actions will ease our traffic jams in New York, which will help reduce flight delays all across the country.

In addition to tackling air congestion, this department has built an impressive record when it comes to travel safety. I hope you take pride in the record -- department policies that helped make the past seven years the safest ever in commercial aviation. Last year on America's roadways we saw the lowest highway fatality rate ever recorded.

Another important part of our transportation record is our work to safeguard the environment and promote energy security. The energy bill I signed last year will save fuel and cut greenhouse gas emissions by specifying a national fuel economy standard of 35 miles per gallon by 2020.

A lot of folks here in this department worked hard on this initiative, and I congratulate you for your good work. By dramatically boosting our output of clean-burning biodiesel and ethanol, providing tax credits for the purchase of low-emission hybrid vehicles, and investing in technologies like advanced batteries and hydrogen fuel cells, the department can be proud of the ways in which we have made America's transportation system safer, cleaner, and more effective.

Yet there's a lot more work to be done. For example, at an age when teenage drivers use GPS systems in their cars, air traffic controllers still use World War II-era radar to guide modern jumbo jets. That doesn't seem to make any sense to me, and I know it doesn't make sense to the Secretary and a lot of folks in this audience. Modernizing our aviation system is an urgent challenge. So today, I'm signing an executive order that makes this task a leading priority for agencies across the federal government.

Members of Congress have responsibilities. As they take up the next highway and aviation bills in the coming year, they should adhere to a few principles. They should harness the power of the free market through policies like congestion pricing, which uses the laws of supply and demand to reduce traffic on our roads and in the air. They should ensure that taxpayer funds for transportation are allocated based on the true needs of the American people, not spent on wasteful earmarks or the political demands of influential lobbies.

They should provide incentives for the private sector to develop new technologies, invest in our infrastructure, and help make our transportation system worthy of the 21st century.

Just a little advice. Of course, we all wish the American citizen to have a safe and pleasant travel -- travels during this holiday season. We wish them all the best. And our citizens must know there's some really fine people in this Department of Transportation working hard to see that goal comes true.

I want to thank you for what you've done. It's been an honor to serve with you. May God bless you, and may God continue to bless the United States America. Thank you very much. (Applause.)