For Immediate Release
Office of the Press Secretary
November 15, 2008

Fact Sheet: Summit on Financial Markets and the World Economy

In Focus: Summit on Financial Markets and the World Economy

PRESIDENT BUSH: Welcome. Good afternoon. We just had a very productive summit meeting. Thinking about three weeks ago, when I was talking to President Sarkozy and Barroso at Camp David -- some of you were there -- I don't think we could have predicted then how productive and how successful this meeting would have been. 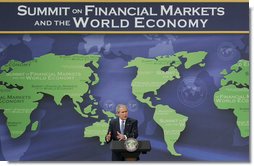 The first decision I had to make was who was coming to the meeting. And obviously I decided that we ought to have the G20 nations, as opposed to the G8 or the G13. But once you make the decision to have the G20, then the fundamental question is, with that many nations, from six different continents, who all represent different stages of economic development -- would it be possible to reach agreements, and not only agreements, would it be possible to reach agreements that were substantive? And I'm pleased to report the answer to that question was, absolutely.

One of the things we did, we spent time talking about the actions that we have taken. The United States has taken some extraordinary measures. Those of you who have followed my career know that I'm a free market person -- until you're told that if you don't take decisive measures then it's conceivable that our country could go into a depression greater than the Great Depression’s. So my administration has taken significant measures to deal with a credit crisis. And then we worked with Congress to deal with the credit crisis, as well.

But I was pleased to tell the folks around the table that the significant actions we've taken are beginning to work. All of us committed to continue to work on pro-growth economic policies. It's phrased different ways -- fiscal plans -- but the whole point was, was that we recognize that, on the one hand, there's been a severe credit crisis, and on the other hand, our economies are being hit very hard. And so there was a common understanding that all of us should promote pro-growth economic policy.

We also talked about broader reforms -- so in other words, the discussions were focused on today and what we're doing about it, but what are we going to do to make sure it doesn't happen tomorrow.

Our nations agree that we must make the markets -- the financial markets more transparent and accountable. Transparency is very important so that investors and regulators are able to know the truth -- considered improving accounting rules, so that investors can understand the true value of the assets they purchase. We agree that we need to improve our regulations and to ensure that markets, firms, and financial products are subject to proper regulation and oversight.

For example, credit default swaps -- financial products that ensure against potential losses -- should be processed through centralized clearinghouses. That's a significant reform. Heretofore, the credit default swaps were traded in over-the-counter, unregulated markets.

Yesterday the Working Group on Financial Markets, which is -- which is obviously associated with the White House, announced an initiative to create these kinds of clearing houses. And I know that other nations are working on them as well. This process will help expedite credit default swaps and other types of instruments not being traded in unregulated, over-the-counter markets.

By bringing greater stability to this important sector, we will help with liquidity, but also mitigate risk.

Third, we agreed that we must enhance the integrity of the financial markets. For example, authorities in every nation should take a fresh look at the rules governing market manipulation and fraud to make sure that investors in all our countries are properly protected. We agree that we must strengthen cooperation among the world's financial authorities. There was a lot of discussion about the International Monetary Fund and the World Bank, for example.

Leading nations should make regulations consistent. As well, we should reform the international financial institutions. Again, these institutions have been very important -- the World Bank, IMF -- but they were based on an economic order of 1944. And so to better -- we agreed that to better reflect the realities of today's global economy, both IMF and World Bank should modernize their governance structures. They ought to consider extending greater voting power and representation to developing nations, particularly those who have increased their contributions to the institutions.

All this is an important first step -- in other words, this is a beginning of a series of meetings. People say, well, why don't you have one meeting and, you know, call it Bretton Woods II. Well, Bretton Woods I took two years to prepare. I don't know what you want to call this one, but whatever name comes from this meeting, it took three weeks to prepare. And so it makes sense to come out of here with a firm action plan -- which we have.

It also makes sense to say to people that there is more work to be done and there will be further meetings, sending a clear signal that a meeting is not going to solve the world's problems. A meeting will help begin a process so that we can say over time that we will have a regulatory structure in place that will make this less likely to happen in the future.

And so we've directed our finance ministers to work with other experts and consult with officials in other economies and then report back to the leaders with detailed recommendations. Whatever we do, whatever reforms are recommended, we need to be guided by this simple fact: that the best way to solve our problems and solve the people's problems is for there to be economic growth. And the surest path to that growth is free market capitalism.

Leaders at this summit agreed on some other matters of importance. One is to reject protectionism and refrain from erecting new trade barriers. This is a very important part of this summit. The temptation in times of economic stress will be to say, oh, trade isn't worth it, let's just throw up protective barriers. And yet that attitude was rejected, thankfully. And matter of fact, not only rejected, there is a determined effort to see if we can't complete the modalities for Doha by the end of December.

One of the things I stressed as well is that the United States, in the midst of this financial crisis, will not abandon our commitments to people in the developing world; that the HIV/AIDS initiative, known as PEPFAR, will remain strong and vibrant; that our deep desire to significantly reduce malaria deaths in countries on the continent of Africa will not be diminished; that our obligation to help feed the hungry will not stop; that in the midst of all this turmoil and financial crisis, we will meet our obligations. These obligations are in our national security interests and our economic security interests and they in -- are in our moral interests.

And so I will tell you that I thought this was a very successful summit. And they're going to meet again. I keep saying "they" because some of you may not have heard yet, but I am retiring. But I told the leaders this: that President-Elect Obama's transition team has been fully briefed on what we intended to do here at this meeting. I told them that we will work tirelessly to make sure the transition between my administration and his administration is seamless. And I told them that I hope he succeeds, that it's good for our country that people see a peaceful transfer of power. And I hope it was good for them to hear that even though we're from different political parties, that I believe it's in our country's interest that he succeed.

So I want to thank you for giving me a chance to come and visit with you. Thanks for covering this summit. Goodbye.