For Immediate Release
Office of the First Lady
November 13, 2008


Yesterday, a group of young women on their way to school in southern Afghanistan were assaulted. The attackers threw acid on the girls' faces, and three were seriously injured. My heart goes out to the victims and their families as they recover from this cruel attack.

The Taliban's continued terror attacks threaten the progress that has been made in Afghanistan. Today, Afghan women are attending school, running for political office, and serving as police officers. Afghanistan has more than 60 female judges and 400 female journalists. Women make up 28 percent of Afghanistan's parliament, and more than six million children - including two million girls - are now in school. 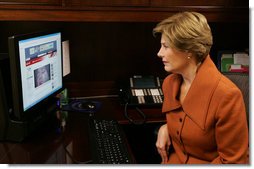 The United States and our Allies are working with the Government of Afghanistan to build more schools where children can learn, open additional roads so that commerce can grow, and provide basic healthcare for the Afghan people.

These cowardly and shameful acts are condemned by honorable people in the United States and around the world.