For Immediate Release
Office of the Press Secretary
November 12, 2008

THE PRESIDENT: Thank you all. Please be seated. Welcome to the White House. Champions day here on the South Lawn. We appreciate you coming. We appreciate the fact that as champions you have set goals and you have worked hard to achieve those goals.

I appreciate very much the fact that you brought your coaches with you, and people at your universities who support you. I'm proud to welcome the Secretary of Housing and Urban Development, his wife Molly, and daughter Ella. He is here because he is a graduate of Northwestern University. Of course, you're probably here to cheer all the teams, right? Yes. 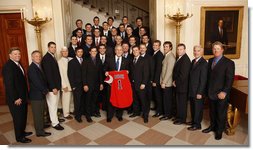 I want to welcome other members of the administration, school officials, families, and fans. First team I want to honor is the team for which we have called upon this weather: the University of Alaska Fairbanks rifle team. (Laughter and applause.) The Nanooks are with us today. You won your 10th national championship and your third in a row. I want to welcome coach Dan Jordan and the folks from Fairbanks -- University of Alaska Fairbanks. I asked the captain, "Who did you beat to get here?" And he said, "Army." (Laughter.) The folks at West Point need to practice. (Laughter.) These guys make good competition to you. Congratulations. Welcome. And we are glad you're here.

A lot of teams from the state of Arizona have joined us. (Applause.) We put this weather on just for you. (Laughter.) The University of Arizona men's and women's swimming and diving teams are here. In March, the women defeated Auburn to win the national championship, and one week later, the men handily beat the University of Texas. We welcome you here. This is the first national championship for either team. And I got the feeling, having talked to some of the athletes, this will not be the last time you'll be at the White House, even though it will be my last time here at the White House. (Laughter.) Coach Frank Bush -- no relation -- and the mighty Arizona men and women's team, congratulations, and we welcome you. (Applause.)

The Arizona State University men's and women's indoor track and field team have joined us today. (Applause.) There you are. The Sun Devil men and women both took home indoor track and field championships. This was the first indoor title for the men, and a repeat for the women. You have a great leader and coach, Greg Kraft, and we're glad to welcome you back. Congratulations and thanks. (Applause.)

Arizona State softball team are with us today. (Applause.) Seems to be some support out there for women's softball. You're looking at a big women's softball supporter. You went 66-5, and 10-0 during the post-season to capture the Sun Devils' first NCAA Softball National Title. When Coach Clint Myers arrived three years ago, he promised that you would win a national title -- that's a pretty bold promise, Coach Myers -- and you've delivered. And you thanked him by dumping Gatorade all over him. (Laughter.) I hope you sent them the cleaning bill.

The Florida State men's outdoor track and field team have joined us today, the mighty Seminoles. (Applause.) This is your third straight title. Coach Bob Braman told me that he -- last year, he said, "We'll be back, Mr. President." I said, "I'll be here, too." You're in the process of winning; you produced nine All-Americans. Congratulations on another great championship. (Applause.)

The Northwestern University women's lacrosse team. (Applause.) They finished 21-1. I must tell you, I was slightly disappointed when I came in the White House room there and looked at the feet of those women. I was looking for flip-flops. (Laughter.) Coach Kathy -- Kelly Hiller led you to the fourth straight national title over Penn, and here is what she said: "I'm not going to call ourselves a dynasty, but if you want to, I'm okay with it." (Laughter.) Welcome back, a dynasty. Congratulations, ladies. (Applause.)

LSU -- (applause) -- women's outdoor track and field team. Straight out of Baton Rouge, Louisiana. (Laughter.) It came down to the wire -- the very last event of the very last day was the 4x400, and you won. And now you are the national champs. We welcome Coach Dennis Shaver and the women from Louisiana State University. (Applause.)

I'm proud to welcome back Coach John Murphy's Brown University women's rowing team. (Applause.) This is the second straight year that the women have been back. This is your sixth national championship in less than a decade. You are the most successful crew in NCAA women's rowing history. Congratulations, and welcome back to the White House. (Applause.)

And finally, Fresno State men's baseball. (Applause.) So you talk about a team that refused to quit. This team lost 12 of the first 20 games of the season. I suspect some of you wrote you off, you know, like -- (laughter) -- eight and 12? These guys call themselves champs? You needed to win your conference tournament just to make the NCAA field of 64 teams. Six times in post-season you were only one game away from elimination. Every time you held on, and you became national champs. No wonder the ESPYs nominated you for the best upset of the year. I thank you for your willingness to never say die, your willingness to keep fighting. Steve Detwiler said this -- he played with an injury by the way -- he said, "It's mind over matter. The pain is temporary. The pride is forever." And I suspect, Steve, a lot of athletes, whether they were on your team or on the teams represented here, can testify that pride is forever. This is a prideful moment for you. 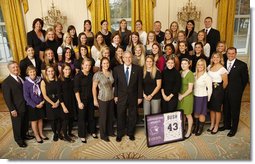 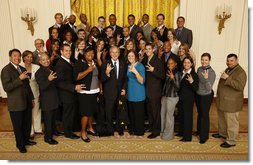 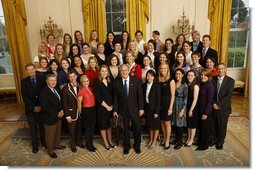 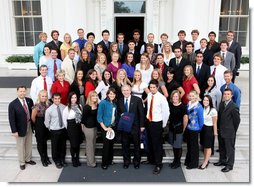 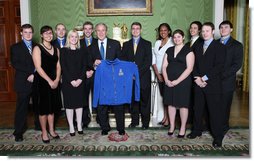 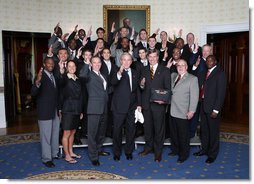