For Immediate Release
Office of the Vice President
November 11, 2008

THE VICE PRESIDENT: Thank you. Thank you very much Secretary Peake; members of Congress; leaders of Veterans Service Organizations; members of the official delegation from Iraq and other distinguished guests; military families; fellow citizens. Thank you all for the welcome, and good morning to you all. I'm grateful for the honor of participating in this important ceremony. Let me give a special word of thanks to the Color Guard, to the U.S. Army Band, and to active duty personnel gathered here at Arlington. It's a privilege to be with all of you, and I bring good wishes from the President of the United States, George W. Bush. 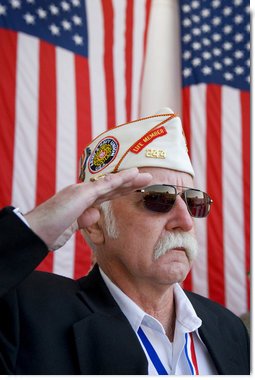 Just a few moments ago, on the President's behalf, I presented a wreath at the Tomb of the Unknowns. Standing watch today, as always, are the Tomb guards of the Third U.S. Infantry Regiment. The careful rituals of the Old Guard have made it one of the legendary units of the United States Army. Their vigil goes on without fail, 24 hours a day, 365 days a year. It's a high honor for anyone to be selected as a Tomb guard, and I want to commend these fine American soldiers for carrying out their duty with great skill and dignity. (Applause.)

This holiday for the nation used to be called Armistice Day, after the document signed on the 11th hour of the 11th day of the 11th month in the year 1918, which brought to an end the First World War. Well over four million Americans served in that conflict, and all of them are now gone except for one. He is Frank Buckles of Charles Town, West Virginia, who 90 years ago today was on active duty in the United States Army. Our last Doughboy is nearly 108 years old, and on this Veterans Day we're thinking of him with the greatest respect and pride. (Applause.)

Corporal Buckles is a living connection to a war fought long ago, to a time when America deployed a great Army to oppose the enemies of freedom. Only 23 years after the Armistice, our nation was called to another difficult global task in the biggest war we have ever had to fight. When that struggle was over, we had turned back dictatorship and militarism across the globe, and former adversaries became friends of the United States. The Second World War ended more than 60 years ago, yet many Americans still remember it well. And we're pleased to be joined in the amphitheater today by veterans of World War II. (Applause.)

Also present are military veterans from the eras of the Cold War, Korea, Vietnam, the Persian Gulf War, and the ongoing campaigns in Iraq and Afghanistan. We welcome all of you, and we thank you for your service and for being here with us today. (Applause.)

Veterans Day finds us, once again, as a nation at war. The conflict began with a direct attack on the United States. After seven years, the war goes on, but never again has the battle returned to American soil. We are safer than we were on September 11th. (Applause.) And we remain today as we have been for 232 years: A free people, worthy of our freedom, and determined to protect this great nation founded under God. (Applause.) 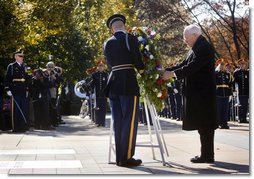 There is no mystery behind the endurance and the success of American liberty. It is because in every generation, from the Revolutionary period to this very hour, brave Americans have stepped forward and served honorably in the Armed Forces of the United States. Every one of them deserves the thanks and the admiration of our entire country.

Military service demands a special kind of sacrifice. The places where you live and serve, the risk you face, the people you deal with every day -- all of these are usually decided by someone else. For the time you spend in uniform, the interests of the nation must always come first. And those duties are shared by family members who make many sacrifices of their own, face separation during deployments and sometimes bear extreme and permanent loss.

Military service brings rewards as well. There is the pride of developing one's character and becoming a leader, serving a cause far greater than any self interest and knowing that our nation's cause is the hope of the world. Every man and woman who wears America's uniform is part of a long, unbroken line of achievement and honor. No single military power in history has done greater good, shown greater courage, liberated more people, or upheld higher standards of decency and valor than the Armed Forces of the United States of America. (Applause.)

That is a legacy to be proud of, and those who contributed to it must never be taken for granted. To honor our veterans, we must keep the promises we have made to them. We must care for those who have been injured in the service of our country. We must honor and remember those who have died. And we must remember those whose fate is still undetermined. We fly the POW flag on Veterans Day for a reason: This nation will not relent until we have accounted for every last one of our missing Americans. (Applause.)

Not long ago I read the recollections of a soldier whose National Guard unit returned home after a lengthy tour of duty in Iraq. Delays and disruptions made their journey far longer than expected. The young man and his comrades finally landed at the airport in Bangor, Maine, 36 hours late; it was three o'clock in the morning. Like everyone else on the aircraft, this soldier was tired, hungry and frustrated. But, he said, "As I walked off the plane, I was taken aback; in the small, dimly lit airport, a group of elderly veterans were there waiting for us, lined up one by one to shake our hands. Some were standing, others confined to wheelchairs, and all of them wore their uniform hats. Their now-feeble right hands stiffened in salute, and their left hands held coffee, snacks and cell phones for us. As I made my way through the line, each man thanking me for my service, I choked back tears. We later learned that this VFW group had waited for more than a day in the airport for our arrival." 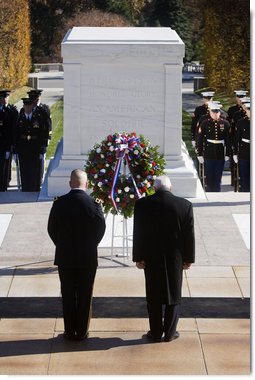 In scenes like this, which have been repeated so many times in recent years, we see the best in the character of America's veterans. There is a unique fellowship among them, and they never forget the Americans who have followed their example and now serve on active duty. They love their country. They believe in its cause. And they know first hand that our world is a much better place because of the power, the influence, and the values of the United States. (Applause.)

Before I close with another story, I want to recognize the contribution of the Navy band here with us here today, and for their participation in these ceremonies. (Applause.)

Recently, at the White House, the following story was told. It happened in Italy, in a time not too long after the end of the Second World War. A father wanted to encourage his young son to do well in school. After the boy got good grades, his dad took him on a journey to Rome. Near the end of their vacation the father said, "Now we'll have the most important day. I'm going to take you to a sacred place." He brought the boy to the military cemetery at Anzio, the final resting place of nearly 8,000 American servicemen.

As they stood there among the rows of crosses, the father turned to his son and said, "Read those names and read those birth and death dates. These are young people, young soldiers who crossed the ocean and came here, and made the extreme last sacrifice to give you freedom and dignity. You owe them everything that is good in your life today. You have to swear here today that you will never, ever forget that you owe them everything you have, and you will always be grateful to their country and to them for what they gave you."

This is a story told by Silvio Berlusconi, now the Prime Minister of Italy, and the boy in the story is him. All his life he kept his promise to his father, and last month at the White House, he expressed his nation's continuing gratitude to the people of United States. 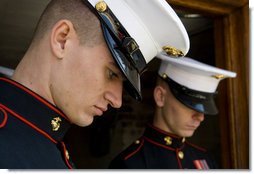 The America that liberated Europe six decades ago is still an active, hopeful presence in the affairs of mankind. In a world of so many perils, from hunger and disease to political oppression to the spread of deadly technology, America remains the best hope of those who suffer and live in fear. Our cause is liberty, justice, and peace, and millions breathe free today because of American soldiers who fought and sacrificed for that cause.

Many of those heroes rest in places like Anzio and Arlington. Yet so many of them are still with us as friends, as neighbours and colleagues. They are America's veterans, and they are still the pride of our nation. They have fought our wars, defended our shores and kept us free. May God keep us ever grateful for their service. 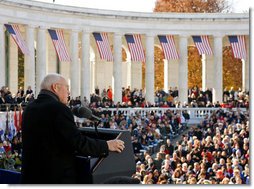 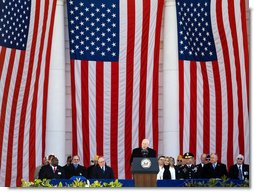