For Immediate Release
Office of the Press Secretary
November 11, 2008

THE PRESIDENT: Thank you all. Thank you for the warm welcome. Be seated. Charles and Rich, thanks a lot. I gratefully accept the Freedom Award. And I'm honored to be with you today as we rededicate a great monument to freedom: the Intrepid Sea, Air & Space Museum. At this ceremony, we recognize nearly 55,000 Americans who served aboard the USS Intrepid, including some who are here today. And we commemorate Veterans Day by honoring all those who have worn the uniform of the Army, Navy, Air Force, Coast Guard, and Marine Corps. Thank you for serving our great nation. (Applause.) 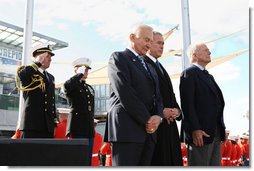 I am proud to be traveling with the First Lady of the United States, Laura Bush -- (applause) -- the most patient woman in America. (Laughter.) Governor, thank you for joining us; Secretary Kempthorne. Senator Hillary Clinton, I'm proud to be with you. Thank you for being here. (Applause.) Congressman Pete King, Congressman Charlie Rangel, Congress Anthony Weiner -- thank you all for joining us today. Looking forward to that lame-duck session, aren't we? (Laughter.)

What an awesome guy General Jim Conway is, Commandant of the United States Marine Corps and member of the Joint Chiefs. (Applause.) Christine Quinn, thank you for your remarks. Bill White, the Vanna White of the Intrepid. (Laughter.) Arnold Fisher and the Fisher family -- what a fabulous contribution the Fishers have made to the United States of America, and we thank you from the bottom of our hearts. (Applause.)

Members of the Intrepid Museum and Foundation Board of Trustees, Wounded Warriors -- you know, oftentimes they ask me, what are you going to miss about the presidency? And first reaction is, I say, no traffic jams in New York. The truth of the matter is, I will miss being the Commander-in-Chief of such a fabulous group of men and women -- those who wear the uniform of the United States military. (Applause.)

Veterans Day has a long and solemn history. The event that inspired it took place 90 years ago today, in a small railway car in a French forest. November the 11th, 1918, the Allied Powers and Germany signed an armistice that ended one of the bloodiest wars the world had ever witnessed. By the time that day arrived, World War I had raged for more than four years, and more than 8 million soldiers had given their lives. But on the 11th hour of the 11th day of that 11th month, the guns fell silent -- and peace began to return to Europe.

To commemorate the war's end, President Woodrow Wilson declared that November the 11th should be remembered as Armistice Day -- a holiday to honor the brave sacrifices of the American soldiers who defended democracy and freedom overseas. Today, we know it as Veterans Day -- a day when we celebrate and thank and honor every man and woman who have served in our Armed Forces. 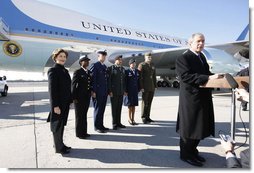 In the years since we began celebrating Veterans Day, America's Armed Forces have defended our freedom in many conflicts. And in those conflicts, they have often relied on the might of the USS Intrepid.

The great ship's keel was laid on December 1, 1941. Less than a week later, Pearl Harbor was attacked -- and America entered World War II. In the years to come, as the United States Navy defended the freedom in the Pacific, the men of "the Fighting I" would be in the thick of the battle. The Intrepid participated in the invasion of the Marshall Islands. She played a key role in the amphibious assault on Okinawa. She was part of one of the greatest sea battles in history: the Battles of Leyte Gulf.

In that massive engagement, American forces faced some of the most formidable elements of the Japanese Navy. The Japanese fleet included the Yamamato* and the Musashi -- these were the heaviest and the largest battleships ever constructed. The Imperial Navy approached the coast of the Philippines from three different directions, and it was a fearsome challenge -- but the men of this ship were ready. The Intrepid's Air Group fought courageously and without rest. By the time the battle ended three days later, the United States Navy had sunk the Musashi to the ocean floor, and lifted hopes for victory in the Pacific.

The war ended the following year, but the Intrepid's mission did not end. As the United States raced into the new frontier of space, the Intrepid stood by to retrieve astronauts returning to Earth. During the Cold War, she patrolled the Mediterranean and helped force the surrender of pro-Castro terrorists who had hijacked a freighter in the Caribbean, and did three tours off the waters of Vietnam. For our nation's bicentennial celebration, the United States Congress paid a fitting tribute to this ship's extraordinary service when they selected the Intrepid to represent the United States Navy in Philadelphia. 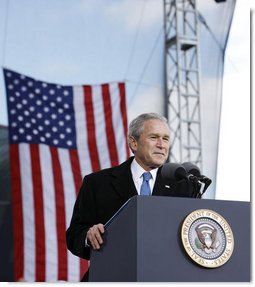 After more than 30 years at sea, the Intrepid was permanently decommissioned. Despite her amazing history, she was destined to be scrapped. But thanks to the work of the Intrepid Museum Foundation, she found a home in New York City. Since 1982, she has been a museum that educates new generations of Americans about the high price that those who came before them paid for their freedom.

One of the veterans who has been honored here was a Navy pilot who flew Avenger torpedo planes during World War II. When he was invited onboard the Intrepid for the 50th anniversary of D-Day, he was moved to see that the museum had arranged for a vintage Avenger painted in the style of his unit to be right here on the deck. It just so happens that it was flanked by two of the men who had flown in his squadron. The man the Intrepid honored that day is a great American. He's a dedicated servant to this country, and I can tell you from personal experience he's a fabulous father. (Applause.)

Even as a museum, the Intrepid still answered the call to service. I'm pretty certain most Americans don't understand what I'm about to tell you, but on September the 11th, when we came attacked just a few blocks from here, the Intrepid was used as an emergency command center. First responders launched helicopters from the decks. It became clear that this ship -- which helped defeat the great totalitarian threats of the 20th century -- was front and center in the opening moments of a new struggle against the forces of hatred and fear.

The war on terror has required courage; it has required resolve equal to what previous generations of Americans brought to the fields of Europe and the deep waters of the Pacific. And I'm proud to report to my fellow citizens, our Armed Forces, the Armed Forces of this generation, have showed up for the fight, and America is more secure for it. (Applause.)

This morning, Laura and I flew up here with some brave men and women who are keeping us safe. I want to introduce them to you. 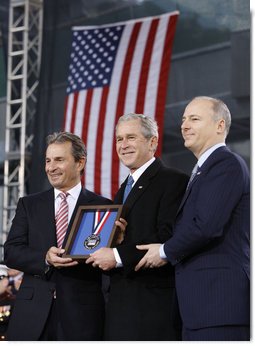 Staff Sergeant Michael Noyce-Merino was the first National Guardsman ever to be named the Army's Noncommissioned Officer of the Year. Senior Airman Alicia Goetschel was named one of the Air Force's Outstanding Airmen of the Year for her work in keeping dangerous extremists off the streets of Iraq. Chief Petty Officer Shenequa Cox won several awards recognizing her as one of the Navy's finest sailors. Petty Officer First Class Chris Hutto was honored as the Coast Guard's Enlisted Person of the Year. And United States Marine Sergeant John Badon's bravery earned him two Purple Hearts for his service in Operation Iraqi Freedom. Where are my new pals? God bless you. (Applause.)

They are representative of the finest our nation offers. And they have the support of strong and caring and loving families. And so on this Veterans Day, not only do we honor those who have worn the uniform, those who are wearing the uniform -- we honor their families. And we thank them from the bottom of our hearts.

And I love what the Intrepid Relief Fund and the Intrepid Fallen Heroes Fund have done to support our veterans, as well. It provided more than $100 million to military families in need. The Intrepid's Fisher House program has provided temporary housing for families of servicemen and women receiving medical treatment.

At the Center for the Intrepid's physical rehabilitation facility in San Antonio, Texas, America's wounded warriors receive some incredible medical care. I have seen what happens in this place of healing and hope firsthand. The Intrepid Center brings great compassion to those who have worn and are wearing the uniform. It also shows that the American people are incredibly generous in supporting the veterans. And I want to thank the Intrepid members, and those who support the Intrepid foundations, for your work on behalf of our country. 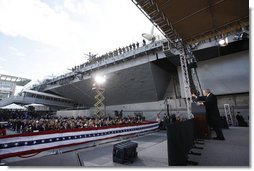 Throughout the decades, our servicemen and women have shown a spirit of selfless courage. I was impressed by the story of Alonzo Swann, who on October 29, 1944, here on the deck of the Intrepid, had to help his fellow sailors deal with a kamikaze attack. He saw his best friend burning alive and caught in a gun mount. He rushed into the flames. He attempted to save his buddy, but before he could do so, an ammunition then detonated; nine were killed, six injured, including Alonzo.

For his bravery, he was awarded the Bronze Star. It's a high honor, but a lot of folks didn't think it was a high enough honor. They felt he deserved the Navy Cross, and many believed that he had been denied the Navy Cross because of the color of his skin; he was an African American. For 50 years, his advocates petitioned the government -- and for 50 years they were unsuccessful. But he kept the faith. November 3, 1993, under the presidency of my predecessor, President Bill Clinton, right here on the deck of the Intrepid, Alonzo Swann finally received his Navy Cross. And I want people to listen to what he said. He said, "If you think you're right, fight your heart out." That ought to be the motto of the modern United States military. You think you're right, and you're fighting your heart out for the sake of peace and freedom, and we thank you for it. (Applause.)

Laura and I are honored to be here. We're honored to see this majestic place. I love the fact that parents can answer a child's question about "Why fight?" with this answer: These brave souls fought for freedom, they fought for liberty, and they fought to guarantee the rights given to us by our Creator, and that has been the history of our Armed Forces -- brave folks, the mightiest defenders of those unalienable rights.

So on behalf of a grateful nation, I thank our veterans for your service, for your commitment. May God bless you, and may God continue to bless the United States of America. (Applause.) 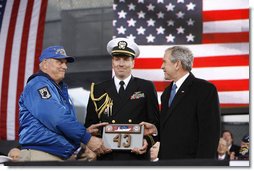