For Immediate Release
Office of the Vice President
November 8, 2008

THE VICE PRESIDENT: Thank you very much General Peay. I appreciate the kind introduction. I apologize for my laryngitis today. The good news is it's going to be a short speech.

Secretary Jack Marsh, distinguished guests, members of the Corps, thank you for the warm welcome to the Virginia Military Institute. In all my visits to this campus I've never been more impressed than I am this morning. Ladies and gentleman of the Corps, I know that each one of you is well aware of the place that VMI holds in this commonwealth and in our country. It's made immense contributions to defense of the nation. It's traditions of honor, discipline, character and self-reliance are legendary and unshakable. Its graduates form one of the most loyal and devoted alumni groups found anywhere. For preparing leaders and giving steady service to the nation, VMI is truly one of America's finest institutions. 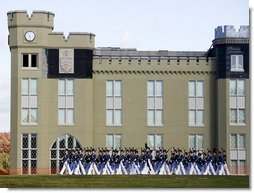 In a time of challenge for our country, these are the very principles that set America apart from our enemies. Seven years ago a war began with a heartless attack on innocent Americans, perpetrated by men who reject and despise every principle on which civilized life depends. They reject every standard of moral conduct. They live not by a code, but by a cult of murder, suicide and death. They compose not a den of criminals, but a movement with global ambitions and a yearning to seize and use the deadliest technologies against us. They are a strategic threat to the United States. They continue to test us on many fronts, yet this nation remains resolute. And as President Bush and I finish our terms of office, we will ensure smooth and graceful transition of power to President-Elect Obama and Vice President-Elect Biden, as they take up the duty of protecting America.

In the struggle at hand, the stakes remain high, but I am confident of the outcome. Those who hate America are no match for those who love America. (Applause.)

This war has already extracted a cost from VMI. You've lost men in the attacks of 9/11 and on the field of honor in Iraq and Afghanistan. They will never be forgotten. And for those fighting today, and in the future, we pray they will be strong and victorious, and returned safely home. It will ever be thus, as long as there are men and women like you to carry the legacy. And I have confidence in every single one of you.

And VMI, you follow the same code of honor known to Marshall and thousands of other leading citizens. You order your lives in the same manner. You accept duty in a way that reflects enormous credit upon you and upon VMI. And so I'm tremendously pleased to extend the respect of your fellow Americans. And I thank you for giving me the honor of being on Post today. I wish you well in your careers. May God grant you wisdom, and may he always watch over the United States of America. (Applause.) 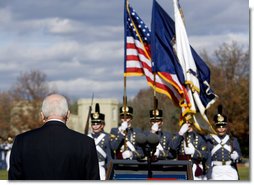 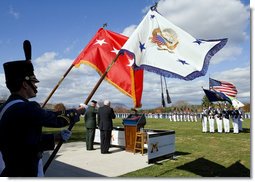 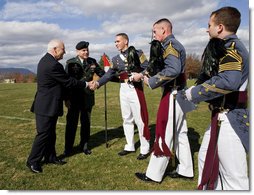