For Immediate Release
Office of the Press Secretary
October 30, 2008

Fact Sheet: Confronting the Emerging Dangers of a New Century

THE PRESIDENT: Thank you. Mr. Director, thank you for your kind introduction and thank you for your leadership. Proud that you invited your wife, Ann, here to be with us. I thank the Attorney General for joining us today. Members of the FBI Academy staff, distinguished guests, family and friends, and most importantly, members of the graduating class: Thanks for having me. 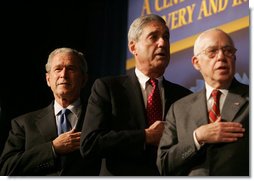 I am so pleased to be back to the FBI Academy, and to share with you this special day. When you walk across the stage, you will receive your badge and your credentials. You'll become special agents of the FBI. You will take your place on the front lines on the war on terror. I thank you for stepping forward to serve your country during this important time. And on behalf of all Americans, I congratulate the Class of 08-14. (Applause.)

This academy has prepared you for the privileges and responsibilities of carrying the badge. Over the past 20 weeks, you have passed rigorous academic and physical requirements. You have spent hours practicing your aim on the firing range, combing the streets of Hogan's Alley, and navigating the Academy's "gerbil tubes." (Laughter.) As part of your training, you were all forced to endure the sting of pepper spray -- which you learned wasn't half as bad as the cafeteria food. (Laughter.)

To reach this day of accomplishment, you have all depended on the wisdom and advice of your instructors. They took a diverse group that includes combat veterans, police officers, firefighters, lawyers, language experts, and computer specialists. And they turned you into an impressive class of FBI special agents. Your instructors are proud of your accomplishments -- and I know you are grateful for their leadership.

Members of this class join the FBI during a momentous time in our nation's history. Earlier this summer the FBI celebrated its 100th anniversary. Unfortunately I wasn't able to attend the official ceremony. So I asked the Attorney General to speak in my place. To be honest, I was somewhat concerned that he might not live up to my high standards of oratory. (Laughter.) He told me I had nothing to worry about. (Laughter.) 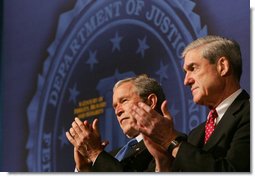 The Bureau has come a long way since its founding. Over the past century, the FBI has grown from a small team of 34 investigators to a powerful force of more than 30,000 agents and analysts and support professionals serving around the world. The FBI has pushed the boundaries of forensic science -- from mastering the art of fingerprints to pioneering the use of DNA evidence. The FBI has inspired generations of children to dream of joining the force. (Laughter.) Sounds like I inspired one or two myself. (Laughter and applause.)

In every era, the FBI has risen to meet new challenges. When mobsters brought crime and chaos to America's cities during the 1920s and '30s, the G-Men of the FBI brought them to justice. When America entered the Second World War, the FBI stopped Axis agents from carrying out attacks on our homeland. During the Cold War, the FBI worked long hours to protect America from Soviet spies. In all this work, the FBI has gained an incredible record of achievement and has earned the admiration of the entire world. America honors all the fine men and women who have served in the ranks before you.

As you go forth from this Academy, you're going to write a new chapter in the FBI's storied history. In the years ahead, your assignments will be as diverse as the FBI's mission -- from dismantling organized criminal networks, to pulling the plug on online predators, to making white-collar criminals pay for defrauding hardworking Americans. And just as your predecessors adapted to meet the challenges of the past century, there's no doubt in my mind you'll respond with courage to confront the emerging dangers of this new century.

Those dangers became clear on September the 11th, 2001. On that day, 19 terrorists brought death and destruction to our shores. We became a nation at war against violent extremists. And we must not rest until that war is won. (Applause.)

More than seven years have passed without another attack on our soil. And this is not an accident. Since 9/11, we have gone on the offense against the terrorists abroad -- so we do not have to face them here at home. (Applause.) We stand with young democracies in Afghanistan and Iraq and beyond as they seek to replace the hateful ideology of the extremists with a hopeful alternative of liberty.

Here at home, we've transformed our national security institutions and have given our intelligence and law enforcement professionals the tools and the resources they need to do their job, and that is to protect the American people. We formed a new Department of Homeland Security. We created a new Director for National Intelligence. We established a program at the Central Intelligence Agency to interrogate key terrorist leaders captured in the war on terror. We worked with Congress to pass legislation that allows our intelligence professionals to quickly and effectively monitor terrorist communications while protecting the civil liberties of our citizens. If al Qaeda is making a phone call into the United States, we need to know why and to whom they're calling in order to protect the American citizens. (Applause.) 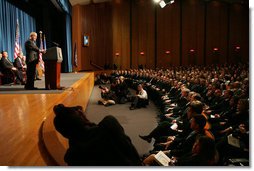 The FBI has played a vital role in doing the most important job that government has, and that is to secure the American people from harm. Since 9/11, the Bureau has worked with our partners around the world to disrupt planned terrorist attacks. Most Americans will never know the full stories of how these attacks were stopped and how many lives were saved. But we know this: The men and women of the FBI are working tirelessly to keep our nation safe -- and they have the thanks of the American people.

The FBI's leadership in the war on terror has required a dramatic change of mission. Before 9/11, terrorism was viewed primarily as a criminal matter. The FBI focused more on indicting terrorists after an attack than on stopping the attack in the first place. For example, after the terrorists targeted the World Trade Center in 1993, FBI agents succeeded in tracking down several of the killers. They obtained indictments against them and they put them behind bars. And that was good work. But eight years later al Qaeda returned to finish the job.

Immediately after 9/11, the FBI made preventing terrorism its top priority. The FBI you join today is focused on collecting and analyzing intelligence -- so we can figure out what the terrorists are planning before it is too late. Over the past seven years, we have more than doubled the number of intelligence analysts and translators on the force. We've enacted the Patriot Act to ensure FBI analysts and investigators have the information they need to protect our nation. We created the FBI's new National Security Branch -- bringing together divisions responsible for counterterrorism and intelligence and counterespionage.

The FBI you join today is working more closely with partners at all levels of government. At the local level, we've increased the number of FBI Joint Terrorism Task Forces from 35 to more than 100. These task forces bring together federal and local law enforcement agents. They have helped break up terror cells in places like Portland, Oregon; Buffalo, New York; and northern Virginia. 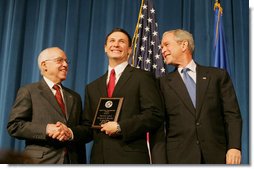 At the national level, we created the National Counterterrorism Center, where the FBI is working side by side with the CIA, the Homeland Security Department, and other federal agencies to track terrorist threats and prevent new attacks. We created the Terrorism Screening Center to consolidate watch lists from different agencies into one master list.

At the international level, we've deployed the FBI to foreign countries to help track down the terrorists. Since September the 11th, the FBI has opened 16 new offices overseas. Two of them are in Kabul and Baghdad -- where hundreds of FBI agents are serving alongside our brave men and women in uniform.

The FBI can be proud of all these accomplishments. These changes were difficult, and they were necessary. We've transformed an agency founded a century ago to meet the challenges of the 21st century. And thanks to the vision and determination of the FBI, America is safer today than we were on September the 11th, 2001. (Applause.)

In the midst of this rapid change, we can be confident that one thing will never change -- and that is the character and courage of those who carry the badge. We see this character and courage in the story of an agent named Leonard Hatton. A bomb specialist for the FBI, Lenny had investigated terrorist attacks around the world. So when he saw smoke rising from the World Trade Center on September the 11th, 2001, he immediately understood the danger. With complete disregard for his own life, he ran to the scene to help others escape. And when the towers came crashing down, Lenny died beneath them. Earlier that same morning, Lenny had told his wife, "Just another regular day at work." Well, for a man like Lenny Hatton -- who always put others before himself -- it was another day at work. We must always honor the memory of this good and faithful servant -- and we vow that those who have given their lives in the war on terror shall never have died in vain. (Applause.)

As new special agents, your charge to keep is to carry out this mission. I ask you to defend the values of fidelity, bravery, and integrity that you have learned here at this Academy. I ask you to carry out your duty to protect the lives and liberties of the American people. If you follow these principles, your careers will take you far, this agency will uphold its solemn responsibility, and America's security will be in good hands. 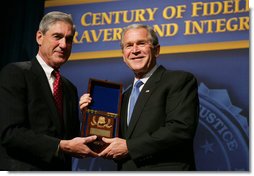 I want to thank you for sharing your graduation with me. I'm inspired by your examples of service. I wish you all the best in the future. May God bless you. (Applause.)