For Immediate Release
Office of the Press Secretary
October 29, 2008

PRESIDENT BUSH: President Barzani, welcome back to the Oval Office. It's been a while since we have seen each other, but we have talked on the phone quite frequently -- and the reason why is because you've played a very instrumental part in the development of a free Iraq. And I thank you for your leadership and I thank you for your personal friendship. 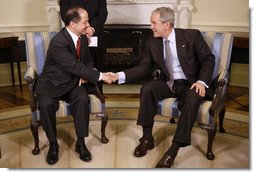 We had a discussion today on several major topics. We talked about the progress on the election law and on the hydrocarbon law, but we also talked about the status of forces agreement, called the SOFA. President Barzani has been a very strong advocate of the Iraqi government passing the SOFA, and I appreciate that.

I informed the President we received amendments today from the government. We're analyzing those amendments. We obviously want to be helpful and constructive without undermining basic principles. And I remain very hopeful and confident that the SOFA will get passed. And Mr. President, you get a lot of credit for your leadership on that issue.

So I'm proud to welcome you back here. Again, I thank you very much for your courage and your leadership.

PRESIDENT BARZANI: (As translated.) Thank you very much, Mr. President. It's good that there has been another opportunity for us to visit with you again. I am here to convey the gratitude of the Iraqi people in general and the people of Kurdistan, in particular, for the brave decision that you've made to rid us of this dictatorship.