For Immediate Release
Office of the Press Secretary
October 27, 2008

PRESIDENT BUSH: Bienvenidos, Señor Presidente, a la Casa Blanca. I am honored you are here to visit me in the White House. We have had a meaningful conversation -- a conversation that you would expect among people who have a deep desire to serve their respective people.

Mr. President, I've been impressed by un corazon grande. You care deeply about the people of your country. And I have felt that compassion. I told the President that the United States wants to help. We want to help with education and health care. We care deeply about people being able to work. Our -- we believe in the social justice agenda. I believe that -- that it's important that the United States be in a position to help influence the lives of citizens that simply want a more hopeful day. And Mr. President, it gives me great comfort to know that you're the person with whom we can work.

I'm impressed by the fact that you want to take a strong stand against corruption. There's nothing more discouraging than to have the government of a people steal their money.

And so we stand with you. It's -- you got a hard job. I understand that. But you bring the right spirit to the job. And I so I want to -- I want to welcome you to the White House, and thank you for your conversation.

PRESIDENT LUGO: (As translated.) First of all, thank you very much for the invitation. It is a commitment and a joy to be able to reinforce our historic relationship with the United States.

Many people have asked, why now? And I think that it's particularly important to visit President Bush in his last days in the White House because we think it's very important to impress upon the world the importance of democratic institutions, and also because we believe that we, as individual people, pass. We have written that our personal history is not as important as the history of our respective peoples.

In Paraguay, I have entered politics in order to change the history of our country. We have not come into politics in order to get into the smokeless industry that is to steal from the people of the country. We came in as Christians, because our Christian duty is to serve the poorest and the neediest of our people. And today, as President of Paraguay, we're taking on all of the challenges with the greatest serenity possible so that we can help our people.

We are profoundly hurt in our souls by poverty, by the exodus of our young people, by the lack of education, by people who don't have roofs over their heads. We are profoundly moved by those people. But that pain is also impregnated with courage and decisiveness. And we have said since the very beginning that if there was anything that was to distinguish our government, it would be international solidarity.

I'll never forget that when I talked to one of our agricultural people, one of the people out in the country, a farmer who said, "What we need is bread. We don't care if it comes from the left hand or from the right hand, we just need somebody to give us food." And that's why we're here, because the Paraguayans have asked us to be here as President to try to recover Paraguay's dignity as a nation. 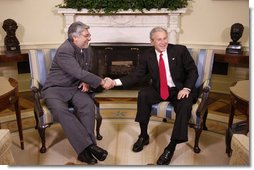 And I told President Bush that we have a lot of dreams, collective dreams, but also my personal dream. And our dream is that Paraguay be known not for its corruption, but for its transparency and for its dignity as a people and as a country. And we believe, we're convinced, that we will be able to achieve that.