For Immediate Release
Office of the Press Secretary
October 27, 2008

MRS. BUSH: Thank you all. Welcome, everyone, to the White House. Thanks to all our very distinguished guests for joining us tonight to celebrate Teddy Roosevelt's 150th birthday.

President Roosevelt once said, "I don't think that any family has ever enjoyed the White House more than we have." Certainly, the antics of the Roosevelt children are White House legend. The President's youngest five slid down the stairs on stolen trays, peppered Andrew Jackson's portrait with spitballs, and turned the room where we now sit into a makeshift skating rink. They kept a zoo of pets -- and they took their calico pony, Algonquin, upstairs in the White House elevator to visit their brother when he was sick. (Laughter.) As White House Chief Usher Ike Hoover put it, "A nervous person had no business around the White House in those days." (Laughter.) 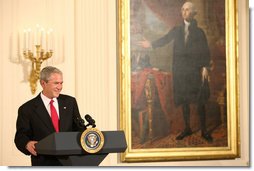 President Roosevelt encouraged his children, and often joined them for games in the White House attic. But the boyishly exuberant leader had limits to his patience -- as when he caught his son, Quentin, trampling the flower bed with stilts. Upon being ordered out of the landscaping, Quentin complained to his father, "I don't see what good it does me for you to be President." (Laughter.)

Here in the East Room, Quentin would burst out of vases to scare tourists like a jack-in-the-box. And the President's oldest child, Alice, would tell visitors that the President beat his children every day -- (laughter) -- news she imparted while draped with her pet snake, Emily Spinach. President Roosevelt must have been relieved when "Princess Alice," as she became known, was finally married in the East Room. As the President once famously commented, he could control Alice, or he could be President of the United States -- but he couldn't do both. (Laughter.)

For more than 100 years, the second floor of the White House was divided into office space for the President and living quarters for the First Family. Roosevelt spent a year working in this arrangement -- but quickly realized that official guests should not be forced to run a gauntlet of children to see the President of the United States. So, in 1902, President Roosevelt began construction on a new executive office building, which became what we know as the West Wing.

When President Roosevelt built the new office space he expanded the family's living quarters into the vacated presidential offices. He created a new area on the east for receiving guests -- maybe you came in that way -- and he removed the grand staircase at the West End of the Cross Hall to enlarge the State Dining Room.

This work was overseen by the architectural firm McKim, Mead, and White, which decorated the White House in an elegant neoclassical style. Here in this room, their work is reflected not only in the plaster walls and polished wood floors, but also in the chandeliers above our heads, the gilded benches that are around, flanking the room, the cornices above the draperies, and the light standards bordering the windows -- all of which are original to the 1902 redesign. 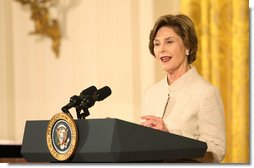 There have been some additions over the years -- including the portrait of President Roosevelt on my left, which was painted by John Singer Sargent in 1903. But even when the Truman administration gutted the entire White House in a dramatic renovation, the State Floor was rebuilt in the style chosen by McKim, Mead, and White -- and President Teddy Roosevelt.

President Roosevelt had at least one regret from the massive project. According to his aide, he grumbled that architect Charles McKim and Mrs. Roosevelt "forced [him] to accept" stone lions' heads on the mantel piece in the State Dining Room.

President Roosevelt took six years to emerge victorious in this marital spat. In a 1908 letter to the architects, he demanded that the stone lion heads be re-carved as bison heads, which he explained "made a much more characteristic and American decoration." At tonight's reception, you'll see that American buffalo do adorn our mantel -- in honor of President Roosevelt's firm request.

But before we move across the hall for the reception, John Milton Cooper is here to tell you more about President Roosevelt's life and presidency. Professor Cooper is the E. Gordon Fox Professor of American Institutions at the University of Wisconsin-Madison. His book, The Warrior and the Priest, is a comparative biography of Presidents Theodore Roosevelt and Woodrow Wilson.

THE PRESIDENT: Thank you, all. Please be seated. Thank you all very much. Job, thank you for the fantastic performance. John Milton Cooper, we appreciate your reading -- I had an interesting piece of history dropped on me tonight by Mrs. Cooper. They met on Capitol Hill, when she was an intern for Senator Prescott S. Bush -- father of President 41, grandfather of President 43. And we welcome you both here. Thank you for coming. (Applause.)

And, of course, it's good to see President Roosevelt. (Laughter.) Oftentimes people ask me, do you ever see any of the ghosts of your predecessors here in the White House? I said, "No, I quit drinking." (Laughter and applause.) But we just saw one.

Members of the Cabinet, thank you for coming. Former Governor of North Dakota, now the Secretary of Agriculture, is with us. That last song must have made you feel pretty good, Governor. 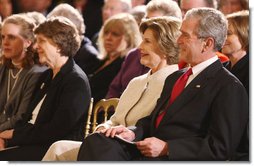 I'm proud to be here with Congressman Pete King. Thanks for coming, Congressman. I appreciate you and your wife coming. The Roosevelt family -- members of the Roosevelt family are here tonight. We welcome you back to the White House. Distinguished guests. Laura and I are thrilled that you came to celebrate the 150th birthday of one of the greatest statesmen in our nation's history -- Theodore Roosevelt. I call him Theodore. (Laughter.) Occasionally call him T.R. (Laughter.)

We remember many of our Presidents as leaders made for a unique moment in our history. President Roosevelt, as John said, was a man for all seasons. He was a soldier who won the Medal of Honor, a peacemaker who won the Nobel Prize. He was one of the world's most daring big game hunters, and a leading advocate for conservation of our country's natural resources. He was an intellectual who sometimes read several books a day, as John mentioned, and he wrestled here at the White House.

He was a man who felt at home on a sprawling ranch in the West. He believed in the importance of a "strenuous life" of exercise. I can relate to that. President Roosevelt also was an advocate for simplifying spelling in America. During his presidency, one member of Congress said that President Roosevelt's efforts would create "confusion and discord" in the English language. I can relate to that. (Laughter.)

Nearly 100 years after his presidency, Theodore Roosevelt's legacy still endures here at the White House. Laura gave you an account of the legacy that still endures. He endures in the West Wing, as well. Right across the door of the Oval Office is what was his former office, known as the Roosevelt Room. Above the fireplace hangs a portrait of the 26th President on horseback during the Spanish-American War. That portrait is a reminder -- when I look at it I think about the character and courage that is necessary for any President. For the past eight years, his legacy has been an inspiration to me. It will be an inspiration to the person who replaces me, and it will be an inspiration for all Presidents to come.

We thank you for joining us. And please now join us for a reception in the State Dining Room. God bless. (Applause.) 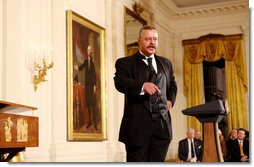