For Immediate Release
Office of the Press Secretary
October 24, 2008

PRESIDENT BUSH: Mr. Secretary General, it's good to have you here in the White House.

PRESIDENT BUSH: Thank you for your steadfast leadership and your courage. Ambassadors, thank you for joining us. The ambassador of Croatia and Albania are here for a special reason. Congressman Engel -- I think he's here. (Laughter.) Right in front of us. Congressman, we are so honored you have taken time to be here. Deputy Secretary England, and the Chairman of the Joint Chiefs of Staff, Admiral Mullen, thank you for coming. Ambassadors, members of the administration, members of the Diplomatic Corps, friends of freedom: Welcome, we are glad you're here. This is a special moment in the hopeful story of human liberty, as America formally declares its support for Albania and Croatia's entry into NATO. 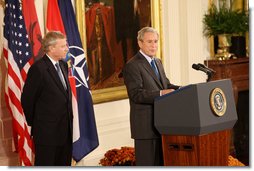 With today's ceremony, we celebrate two young and vigorous democracies seeking to assume new responsibilities in a time of terrorism and a time of war. We strengthen America's partnership with nations that once found themselves in the shackles of communism. We rejoice in taking a major step toward welcoming the people of Albania and Croatia into the greatest alliance for freedom the world has ever known.

The United States is proud to have supported the NATO aspirations of these nations from the beginning. Laura and I fondly remember our visits to Tirana and Zagreb, where we met people who are showing the world the potential and the promise of human freedom. The citizens of Albania and Croatia have overcome war and hardship, built peaceful relations with their neighbors, and helped other young democracies build and strengthen free societies. The people of Albania and Croatia are helping move the world closer to a great triumph of history: A Europe that is whole, a Europe that is free, and a Europe that is at peace.

The invitation to join NATO is recognition of the difficult reforms these countries have undertaken on the path to prosperity and peace. In return, NATO membership offers the promise of security and stability. The United States and our NATO allies will stand united in defense of our fellow members. Once Albania and Croatia formally join NATO, their people can know: If any nation threatens their security, every member of our Alliance will be at their side.

The road of reform does not end with acceptance into NATO. Every member of the Alliance has a responsibility to enhance, promote, and defend the cause of democracy. I'm confident that Albania and Croatia will deliver on their commitments to strengthen their democratic institutions and free market systems.

Albania and Croatia's entry into NATO is an historic step for the Balkans. In the space of a single decade, this region has transformed itself from a land consumed by war to a contributor to international peace and stability. America looks forward to the day when the ranks of NATO include all the nations in the Balkans -- including Macedonia. I thank Macedonia's ambassador for joining us today. We're proud of the steps you're taking to strengthen your democracy. The great NATO alliance is holding a place for you at our table. And we look forward to your admission as a full NATO member as soon as possible.

Our nations seek a path to NATO -- other nations seek a path to NATO membership, and they have the full support of the United States government. Today I reiterate America's commitment to the NATO aspirations of Ukraine, Georgia, Bosnia-Herzegovina, and Montenegro. The door to NATO membership also remains open to the people of Serbia, should they choose that path. All these nations treasure the blessings of liberty because they remember the pain of tyranny. And they share NATO's solemn commitment to defend the free against the unfree, and the weak against the strong.

The lasting strength of the NATO Alliance is a testament to the enduring power of freedom. And the expansion of this Alliance will lead the way to a safer and more hopeful world. On behalf of my fellow Americans, I offer congratulations to the people of Albania and Croatia on this historic achievement. May your children always honor the struggles you endured. May the stories of Albania and Croatia be a light to those who remain in the darkness of tyranny. And may your example help guide them to a brighter day.

SECRETARY GENERAL DE HOOP SCHEFFER: Credit where credit is due. Mr. President, Madam Ambassador, Mr. Ambassadors, Excellencies, ladies and gentlemen: Almost 60 years ago now, when NATO's founding treaty was signed right here in this city, one delegate expressed the hope that it would prove to be a continuous creation. Today's ceremony is ample proof that this hope has been realized.

With Albania and Croatia, two more proud democracies will soon enter our transatlantic family. What started with 12 nations will soon comprise 28. There is no stronger vindication of the enduring nature of the Washington treaty and of the values that it enshrines. Our Atlantic Alliance was born in the Cold War, but it has long outlasted the circumstances that brought it into being. NATO today is an active Alliance and actively working to defend its values against threats from wherever they may come; an Alliance whose members are committed to developing the instruments and the capabilities that are needed to fulfill their demanding missions; and an Alliance determined to work with other nations and organizations to deal with the many challenges before us.

Today we will be witnessing the United States of America ratification of the Protocols of Accession. Given the indispensable political and military role of this nation in our Alliance, this is a most significant moment. We are now one major step nearer to welcoming into the Alliance Albania and Croatia, two more countries who have demonstrated, by word and by deed, that they are willing and able to shoulder the responsibilities of NATO membership.

Their accession will be a boon for NATO, as it will strengthen our common effort to safeguard and promote security and stability. But -- and you, Mr. President, said it already -- it will also be a boon for southeast Europe and a vivid demonstration that southeast Europe can shed its tragic past. Both countries have set an example for others to follow and we will encourage and support all those who aspire that same goal -- for the Europe we are seeking to build should be a continent where nations are free to determine their own future and not have their future decided by others.

Mr. President, Excellencies, ladies and gentlemen: Even after almost 60 years, the Washington treaty indeed remains a continuous creation. This treaty has not only sparked a unique Alliance, it has also helped to create a unique transatlantic community, a strong community of shared values and interests, a community which shall be strengthened further with the joining of Albania and Croatia.

And let me end, Mr. President, by crediting you for your relentless investment and your relentless energy of making NATO a larger and more successful Alliance. I think we have seen in your eight years the energy this Alliance deserves -- but without your personal commitment, I think this would not have been possible. Let me add that finally, on a personal note. Thank you very much. (Applause.)