For Immediate Release
Office of the Press Secretary
October 20, 2008

THE PRESIDENT: I am honored to be with you all. Thank you very much for hosting this meeting here, and the good folks from Alexandria and Pineville, Louisiana.

I have come to talk about the economic situation in the country. A lot of the people down here and other parts of the country are wondering why a free market-oriented President made the decisions to -- necessary to get the government buying stocks in banks, for example. Why would you do that? 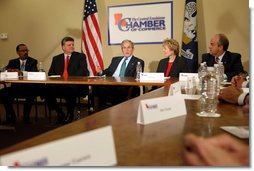 The answer is because I was deeply concerned about a financial crisis becoming so profound and so acute that it hurt the people and small business owners here in Alexandria and Pineville, that's why. If I felt that the crisis could be contained in Wall Street, then I'd have taken a different course of action. But the crisis that is gripping this country, and still has a grip on this country, affects the people around this table. And that's why I made the decision I made.

Part of that decision is to make sure that the people who end up with hardworking taxpayers' money don't enrich themselves as a result of that kind of money. I was talking to Rodney Alexander -- he's a fine congressman from this part of the world -- he said, one thing people want to make sure of, Mr. President, is that when you invest that they're not able to take that government investment and use it to their own advantage, personally -- in other words, golden parachutes, or something like that.

Secondly, I believe -- and I can say this with confidence to the people out here -- that I think we're going to get -- be able to get most of your money back. And the reason I say that is because the government is really making investments, and obviously making investments in a difficult period for our economy. And we're big enough and patient enough to be able to hold these investments. Plus the investments are structured to encourage, for example, big banks, when they get back on their feet and get doing better to buy back the shares or get somebody else to buy back the shares.

One of the things that I have heard around the table -- and I'm not surprised -- is that the regional banks and the community banks, which provide such an important part of many communities -- are such an important part of many communities, and provide such stability for the country's financial system, they're worried about being labeled with the same brush as some of the big banks that have had economic difficulties. And I think the people in Alexandria need to know that community banks are strong, and they got good capital ratios, and they're healthy. And that's good. It's going to be very important for the small business sector. 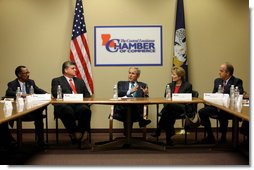 And then the question I've asked here is, what are the attitudes like? And I have heard that people's attitudes are beginning to change, from a period of intense concerns -- and I would call it near panic -- to being more relaxed and beginning to see the effects of changes and the liquidity that is being pumped in the system, that we got a long way to go. As I said Friday, this thaw -- took a while to thaw, it's going to take a while to unthaw. But it's -- but the attitude here is a little different than it might have been a week ago.

And so I want to thank you all very much for giving me a chance to come visit with you. I'm very fond of this part of the country. It's not that far away from my home state. And so, appreciate your time. Appreciate the good folks in this part of the world. I do want to thank all those who have said prayers for me and Laura during our presidency. It's meant an awful lot. Thank you all. 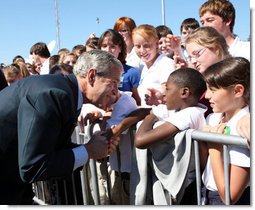